“They sit here in Parliament and they are the ones who get the money, and we get death”

About 300 people from towns around the Western Cape marched in Cape Town on Wednesday demanding more police to curb gang violence in their areas.

The marchers, organised under the banner of the Western Cape United Safety Front, came from Ocean View, Elsies River, Manenberg and Lavender Hill, and from towns further away, including George, Worcester and Malmesbury.

They handed over a memorandum at Parliament and the provincial legislature.

Lucinda Evans from Lavender Hill, who is a member of Philisa Abafazi organisation which offers support to victims of gender-based violence, addressed the crowd. She called for an increase in police officers in the Family Violence, Child Protection and Sexual Offences Unit.

She said people were “sick and tired” of campaigns against violence where national and provincial government “bring food and that’s it”.

She demanded meetings with government “in the next 14 days” and asked what the department of women in the presidency was doing when children, disabled women and lesbians were “under siege”.

The march followed protests on 25 September in Bonteheuwel, Hanover Park and Kensington.

On Wednesday, Minister of Police Bheki Cele met with the organisers of the shut down in Kensington.

The #WCapeTotalShutdown communities did not join Wednesday’s march. In a statement they released on 2 October they stated: “We have resolved from the onset that we are tired of marching to Parliament and government institutions to hand over memorandum that amount to nothing.”

The memorandum handed over by the Western Cape United Safety Front outlined 14 demands, including regular community evaluation of police, conviction of police officers who were “aiding and abetting criminals”, regular police patrols in industrial areas, a police unit focused on children, and better enforcement by the police of the Domestic Violence Act”.

Constance Snyders from Elsies River said she was at the march to “send a message to government”.

“Gangsters can shoot and kill innocent people, innocent children, kidnap, and the government will do nothing for us. We get hurt, we get raped, children get raped, and government does nothing. They sit here in Parliament and they are the ones who get the money, and what we get, we get death,” said Snyders.

“I am in support for the march because I want justice not only for my family but all the families going through the same thing. These churches need to stand up and not cover up crime done by leaders of the church,” said a protester from George, who said his daughter had been sexually assaulted by a pastor.

He said the pastor had been sentenced to 200 hours of community service and was back as a pastor. “He will be working with children again,” he said.

Francois Beukman from Parliament’s portfolio committee on police accepted the memorandum at Parliament. Beukman promised to hold a meeting with the organisers of the march.

At the provincial legislature the memorandum was accepted by Deputy Police Commissioner Major-General Mpumelelo Manci. He said he would read the memorandum and respond to all the issues it raised. 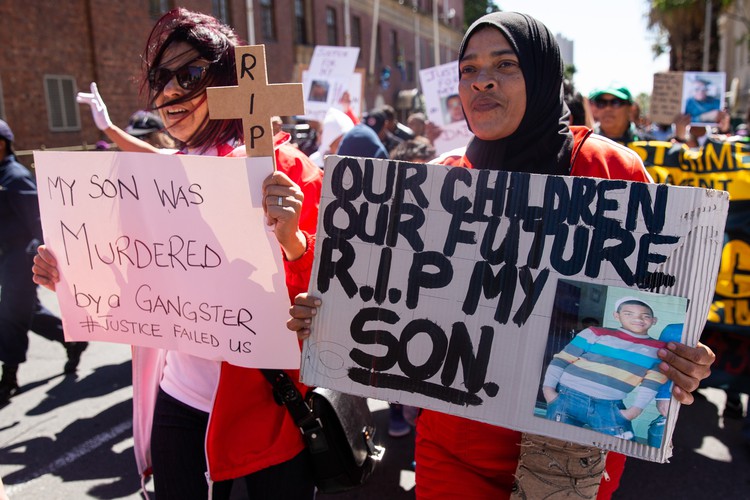 Protesters asked what the department of women in the Presidency was doing when children, disabled women and lesbians were “under siege”. Photo: Ashraf Hendricks

Next:  Banks are clogging up the justice system, says court

Previous:  Victory for debtors as judges rule that cases must be referred to lower courts