Gqeberha mother wants to leave the settlement where her son drowned 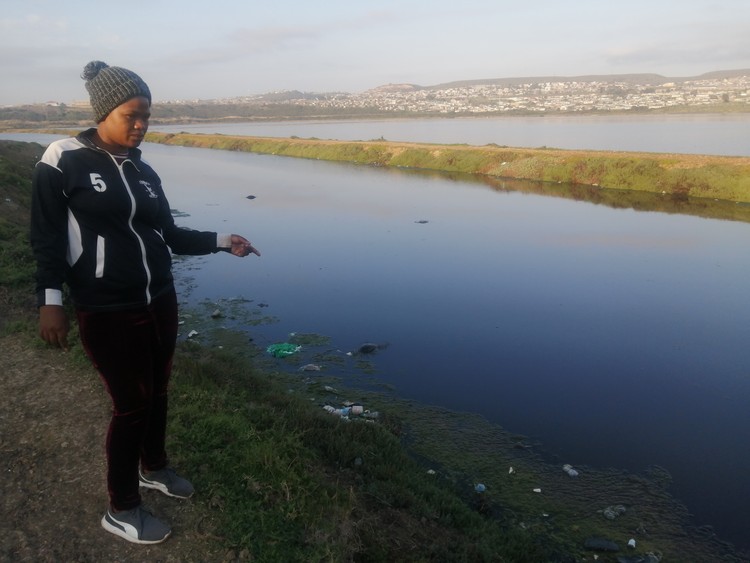 Nomfanelo Maphitsha points to the spot where her 12-year-old son, Samkelo, who was disabled, drowned in the salt pan behind her shack in Missionvale, Gqeberha last year. Residents now want the municipality to move them away from the pans. Photo: Mkhuseli Sizani

About 300 people blocked roads with burning tyres and rocks on Tuesday morning in Missionvale, Gqeberha, demanding to be moved from the abandoned salt pans nearby.

Among the protesters, who were mostly women, was Nomfanelo Maphitsha. Her 12-year-old disabled son, Samkelo, drowned in the salt pan just 200 metres from her Waterville shack in September last year. “If I could be relocated from this place, I could heal from the pain of losing him,” she told GroundUp.

The residents accuse the Ward 31 Councillor Teslin Booysen (DA) of ignoring their complaints. They say over 600 people share three communal taps and 48 small portable toilets. Many households rely on illegal connections for electricity.

According to community leader Ntomboxolo Mawa Waterville was established eight years ago by people who could not afford to pay rent as backyarders. Mawa said in the last six years, six bodies had been taken out of the old salt pan behind the shacks.

She said they suspect criminals use the salt pans to dispose of bodies.

Another community leader, Nolonwabo Matshonga, said the homes are filled with flies and mosquitoes because of the stagnant water and uncollected waste. “Sometimes children swim in this pan without knowing how deep the water is. When it rains, the place is muddy. Ambulances and police don’t come here when it rains because vehicles get stuck in the mud.”

Booysen could not be reached for comment on his cellphone. On Tuesday morning he posted on Facebook, “We are aware of the burning of tyres on the old Uitenhage Road. At this stage there is no proper reason given by residents why they are burning tyres. It’s sad to say that it might be politically driven. The SAPS is on the scene.”

There had been no response to a request for comment from the municipality by the time of publication.

Next:  The station traders who beat PRASA