Taps have been dry for five years in Eastern Cape village

Taps have been dry for five years in Ngquma village in Peddie in the Eastern Cape, and residents have lost hope of getting clean water from the Amathole District Municipality.

Villagers fetch their water from the nearby river where animals drink.

The municipality says the water treatment works which supply the area are operating at full capacity. Spokesperson Nonceba Vuso said the water supply scheme had been designed to supply the community with 25 litres per person per day from communal standpipes. But illegal connections to the pipe network had strained supply, she said.

But community members said 25 litres per person per day was never enough.

They said they had lost hope of ever getting clean water in their area. 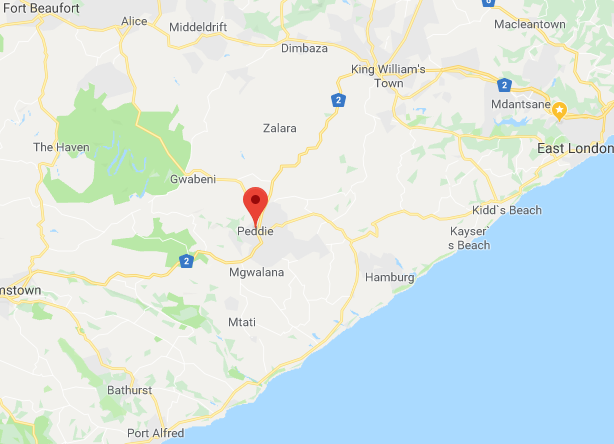 Peddie in the Eastern Cape. Image from Google Maps.

Community leader Thobile Mvabaza said for the past five years residents had been seeking answers from the municipality and their ward councillor without success.

“What we do not understand is why the old pipes are not changed?” said Mvabaza.

Instead, he said, the municipality kept patching old pipes which burst a few days after repairs.

If we are lucky we will get water for an hour on the day the pipe is fixed, then we will be back to square one, fighting with animals to get water,” he said.

The river is 800m away from the village and this is a distance most community members walk carrying 20 litre buckets on their heads.

Resident Nomonde Mvakalisi said she boils the river water before using it.

“I wish you could see how dirty the water is during the day. If you go to the river during lunch time, you will have to chase cows first then wait for water to clear,” she said.

Ward councillor Mlungiseleli Luzipho said almost all the villages in the municipality faced a shortage of water as a result of a two year drought.

Vuso said the municipality was investigating ways to distribute the available water more fairly. A contractor would be on site within the next few months to deal with some of the “infrastructure problems”, she said.

Previous:  “I am left with this blanket and winter is coming”