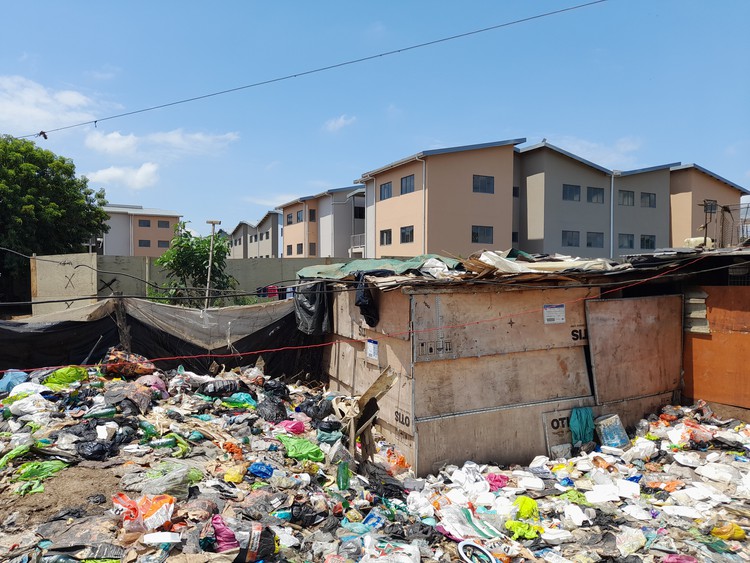 Residents of Jika Joe informal settlement in Pietermaritzburg have been protesting, demanding that the Msunduzi Municipality allow them to move into neighbouring newly built rental units. Photos: Lucas Nowicki

Residents of Jika Joe informal settlement in Pietermaritzburg have had sporadic protests since January, demanding that the Msunduzi Municipality build them houses.

Community members are upset that the recently completed Jika Joe Community Residential Units (CRU) in the area will only be available to rent rather than free government accommodation.

The residents also want to move families whose homes were badly damaged by flooding in December into some of the CRU’s 1,164 units, about 400 of which are fully completed.

Zodwa Kweyama of housing movement Abahlali baseMjondolo’s local branch, told GroundUp that when Mayor Mzimkhulu Thebolla and the Speaker visited them earlier in February, they denied their request for flood victims to be move into the new housing development. “They must build RDP houses in Jika Joe,” she said.

Mayor Mzimkhulu Thebolla, in a video, said that he was “disturbed” by the protests because issues raised by Jika Joe residents “have already been resolved”. He said the housing project started in the community is aimed at ensuring that people live in better conditions.

He said only those who meet the qualifying criteria will be considered as tenants at the CRU. “As part of addressing the slum clearance, there are other projects that will accommodate those who cannot pay. They are striking because we are moving people for phase 2 into temporary houses which are way better than the shacks they’re living in. The landlords there feel that if we move people then they will lose money,” he said.

He also accused members of Abahlali baseMjondolo “of just wanting to create chaos” in the community.

Khawula and many other Jika Joe residents rejected the municipality’s offer earlier in February to move to phase 2 of the temporary accommodation. “The municipality promised that there would be a [housing] plan in 2022, but still there is no plan. They are still putting the temporary tin houses here. We need RDP houses,” said Khawula.

Dombane Mchunu told GroundUp that she was moved into phase 1 of the temporary housing in 2008 after. She said residents were told that they would only be staying there for two years, but 14 years later she now shares her extended structure with 30 children and grandchildren. She said her structure is falling apart.

The two toilets, shared by Mchunu and a dozen other families staying in the temporary accommodation, were in a very bad state when we visited. There were also large piles of uncollected rubbish bags and other dirt strewn everywhere, particularly near the communal taps. There was stagnant green water surrounding the rubbish, following two months of heavy rainfall. Residents say that refuse is almost never collected in the informal settlement.

Municipality spokesperson Ntobeka Mkhizwe said those currently staying in temporary units are on the list for RDP houses and that protesters “should not disrupt the current process”.

According to a 2019 Human Settlements Plan, the municipality has a housing backlog of around 44,263.

Last week, the Democratic Alliance in the Msunduzi Municipality submitted a Promotion of Access to Information (PAIA) request to the National Department of Settlements following the “confusion and lack of transparency over who are the recipients of these [Jika Joe CRU] units”.

The municipality did not respond to questions about the PAIA request by the time of publication. 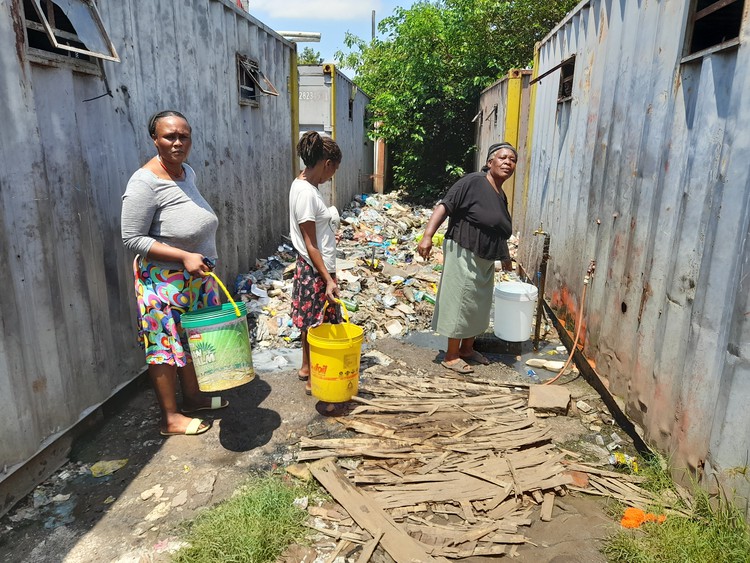 Residents say their rubbish is no longer collected and is piling up. Here women collect water from a communal tap next to a pile of uncollected dirt.

Next:  Villagers fix giant potholes themselves