Protesters uproot electricity poles because they are not connected 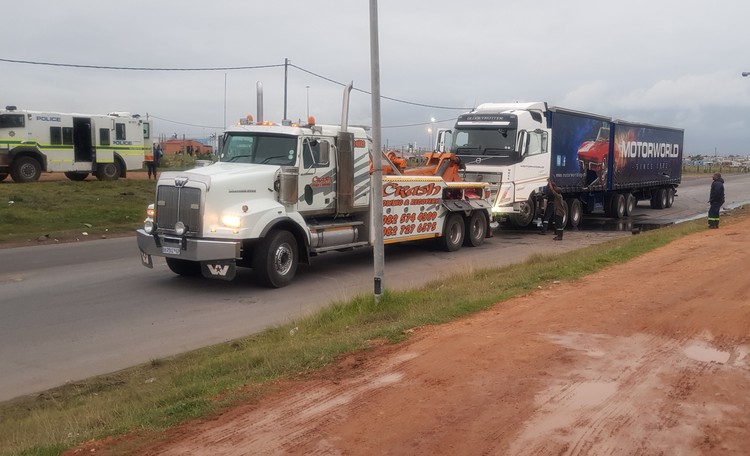 A truck being removed from Addo Road in Gqeberha after it was attacked during a protest over lack of electrification in Nomakanjani informal settlement. Photo: Joseph Chirume

For four days, hundreds of people from Nomakanjani informal settlement in Gqeberha have been protesting along Addo Road demanding electricity.

On Tuesday, the protest turned violent, with some protesters uprooting and burning electricity poles. On Friday, two trucks were torched. The road has now been opened by police.

A protester, who refused to give his name, said, “We have been protesting for several years with no success. Senior municipal officials promised to connect electricity to our shacks. Why is it taking so long? They erected electricity poles but did not finish the job.”

But Nelson Mandela Bay Mayoral Committee Member for Electricity and Energy Luxolo Namette said people in Nomakanjani had illegally connected to the municipal transformers, overloaded them and they had blown. He said the City would be installing at least two transformers by Saturday.

The protests have left houses in neighbouring Ikamvelihle in the dark.

“If they want electricity, why are they burning electrical poles in their area? Why are they blocking Addo and M17 which are vital for the economy of the City?” asked a homeowner who lives in Buthelezi Street.

Police spokesperson Colonel Priscilla Naidu confirmed that about a dozen trucks were targeted on Addo Road. “The majority were damaged with stones while about six were set alight. Addo Road was closed last night,” said Naidu.

Next:  Families to be kicked off state farm to make way for private farmer

Previous:  Murder victim’s friend storms out of Khayelitsha court as case is postponed yet again