Gift of the Takers

Gift of the Givers has stopped its efforts to resolve the water crisis in Makhanda (formerly Grahamstown) after what appears to be a grotesque, government-sponsored rip-off. In a statement today the organisation’s Dr Imtiaz Sooliman explained how it had stepped in on February 12 to address the town’s water supply crisis – a consequence in large part of poor infrastructure maintenance. It did so after the municipality had requested its assistance and told Gift of the Givers that its estimated R23m costs would be paid back by the government from emergency funding. Over 13 weeks it drilled 15 boreholes, built infrastructure, tested water quality and delivered it to communities in bottles or trucks. The Department of Water and Sanitation entered the fray on April 27 to tell Gift of the Givers to to remove its trucks from the area because ‘there was [supposedly] no water crisis in Makhanda’, said Sooliman. It then said only companies from Grahamstown would be paid for drought interventions. A private consultancy firm would receive R1.2m for borehole-related work, another company in the town R7m for boreholes drilled and a third company R1.9m for electrical work. According to Sooliman, all of this work had already been done by Gift of the Givers. ‘This is R10m of taxpayers’ money handed out freely by the government to people as remuneration for work that Gift of the Givers did,’ he alleged. Today Sooliman announced that the organisation would be withdrawing from the area as a ‘matter of principle’.

South Africa’s Saray Khumalo has become the first black African woman to summit Mount Everest. She reportedly reached the summit at 8,848m above sea level in the early hours of this morning. It was her fourth attempt to conquer the world’s highest mountain – on the previous three times she had to turn around because of an earthquake, an avalanche and an injury.

The Bloemfontein launch of Gangster State: Unravelling Ace Magashule’s Web of Capture has been cancelled indefinitely by the University of Free State, which was scheduled to host it next week. Author Pieter Louis-Myburgh told News24: ‘I understand that the UFS security department was threatened by a faction of the ANC, or people who claim to be part of the ANC, that they would disrupt the event with violence.’ He said he had learnt of the news ‘with shock’. Previous launches of the book in Johannesburg and Cape Town were disrupted by protesters. Magashule, now the ANC secretary-general, is a former premier of the Free State.

The USA has taken a series of steps which have triggered fears that it might be preparing for an armed conflict with Iran. Yesterday it ordered all its non-emergency staff to leave neighbouring Iraq after deploying warships and bombers to the Persian Gulf. The New York Times reported that acting Defence Secretary Patrick Shanahan had prepared plans to send 120,000 US troops to the region. US President Donald Trump has blamed Iran for the sabotage of four oil tankers off the United Arab Emirates – an American ally. Iran has accused America of staging the sabotage as a pretext to taking action against the country.

Beaches on Durban’s famous Golden Mile have re-opened after being closed for nearly a week because of a sewage spill. Pumps that cleared the sewage out to sea reportedly tripped last Thursday and the waste was discharged into the harbour area. The city expects the pumps to be back online today but has been using temporary pumps to aerate the water at points along the beaches. There have been concerns that the spill will kill marine life in the area and angling has been suspended. Locals report that a mighty stench remains in the area.

Vandals have stolen the bronze collar and sailor’s cap off the statue of Just Nuisance in Simon’s Town’s Jubilee Square. Just Nuisance is the only dog to have been enlisted in the Royal Navy and he died in 1944. The statue was erected in 1970 and has become a tourist attraction. The Simon’s Town Historical Society is offering a R5 000 reward for the recovery, arrest or conviction of those responsible for the theft. Those responsible for this vandalism aren’t just nuisances, they’re Menaces too.

Energy Minister Jeff Radebe has written to the National Energy Regulator telling it to approve applications from industrial, agricultural, mining and other enterprises who want to generate their own electricity without waiting for finalisation of the new Integrated Resource Plan. The plan is still under discussion at Nedlac and will not be finalised for some months. The licences for private generation would apply to projects between 1MW and 10MW which could be fed into the national grid. According to BusinessLive, permits for 500MW of so-called small-scale embedded generation projects could now be allocated.

The USA administration yesterday raised the temperature in his trade dispute with China by imposing severe sanctions on Chinese telecoms giant Huawei and 70 affiliate companies, including banning them from using any US components or technology in their products without American government approval. Earlier in the day Donald Trump signed an executive order that banned US companies from using telecoms equipment made by firms deemed to pose a national security risk. The administration has already been lobbying US companies to avoid Huawei equipment in the rollout of next-generation 5G networks.

Ackermann nominated for coach of the year

Former Lions head coach Johan Ackermann is a finalist for the English Premiership’s Director of Rugby award. The Gloucester coach will be up against previous winners, Mark McCall of Saracens and Exeter’s Rob Baxter, as well as Northampton’s Chris Boyd and Bristol’s Pat Lam. South African scrumhalves Faf de Klerk and Rohan Janse van Rensburg are among five players nominated for the Player of the Year award. Both awards will be handed out at the annual Premiership Awards evening next week.

The German Football League is the latest organisation to reject proposed changes to the UEFA Champions League. The growing opposition looks likely to scupper the plans for the three-tier European League which includes promotion and relegation. The top tier would include 32 teams, with the top 24 keeping their places for the next year. The current system allows teams to qualify via their domestic leagues. Reports indicate that only a handful of big clubs, mainly from Italy and Spain, are in favour of the new system.

Coming to a screen near you: Harry Potter as an anti-apartheid activist. Well, not quite, but Potter actor Daniel Radcliffe has just finished making a movie titled Escape from Pretoria in which he plays the part of Tim Jenkins, who really did escape from Pretoria Maximum Security Prison with Stephen Lee in 1979. Parts of the movie are to be shown at Cannes when the annual film festival opens next week.

A British TV show which a judge once called equivalent to human bear-baiting has been cancelled, after a guest on the show committed suicide after his appearance. The Jeremy Kyle Show’s format, in which guests are pitted against one another, saw Steve Dymond fail a lie detector test which he had taken in an effort to prove to his girlfriend he had not cheated on her. The moment caused them to split up, and he took his life. The show has been ITV’s most popular day-time offering.

The German women’s national football team has teamed up with a local bank, Commerzbank, to make a wonderfully feisty video about the team ahead of the Women’s World Cup that kicks off on June 7. Worth a watch. 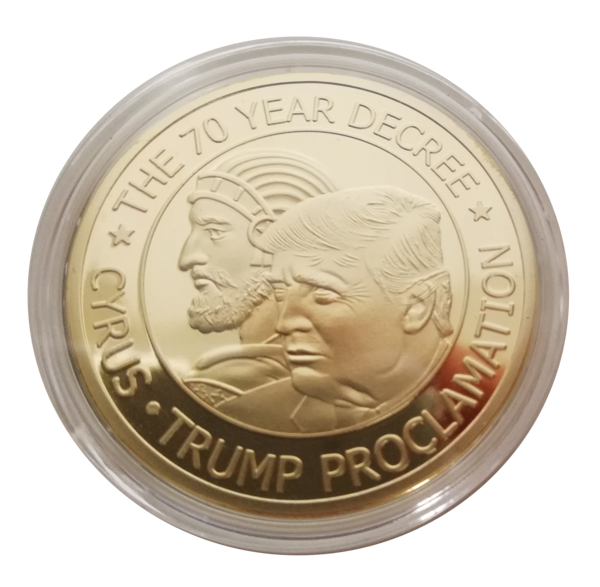 Coining it for God

An American evangelist-businessman is offering US Christians a direct line to God – if they buy his $45 gold-plated coin and hold it in their hands when they pray. Lance Wallnau promises that holding this coin – featuring the twin visages of Trump and the biblical King Cyrus, who was supposedly anointed by God to save his people – will provide a direct ‘point of contact’ that will help them implore God to protect Donald Trump and ensure his re-election in 2020. This is not a joke. Well, it is a joke, but not a deliberate one.

Today’s tremendous tweeter is Glenny Rodge (@Glenny Rodge) for this:
Accidentally just knocked over a lady in Dominos Pizza. Well, I say one …

And this:
Given someone had to tell him to put his helmet on, it’s really little wonder Major Tom didn’t make it.

The solution to yesterday’s clue Tidying shows self respect (7) is: DIGNITY – an anagram of tidying (‘shows’ is the anagram indicator) and a synonym for ‘self respect’.

There has long been speculation that South Africans had a hand in the 1986 assassination of Swedish prime minister Olof Palme, but the killer has never been found. The Guardian’s Imogen West-Knights asks: could the discovery of new evidence finally close the case?

The cancellation of the Free State launch of Pieter Louis Myburgh’s book Gangster State: Unravelling Ace Magashule’s Web of Capture is just the latest confirmation of a disturbing intolerance towards freedom of expression in this country. But it also serves to remind us of the damning revelations in the book. And that Magashule remains firmly in place as ANC secretary-general, where he is busily and obviously trying to undermine President Cyril Ramaphosa. It seems that dealing with Magashule will represent a prime case of Ramaphosa’s ability to both neutralise opposition inside the party and act against corrupt colleagues. The country is watching.

Previous:  Gift of the Givers pulls out of Makhanda