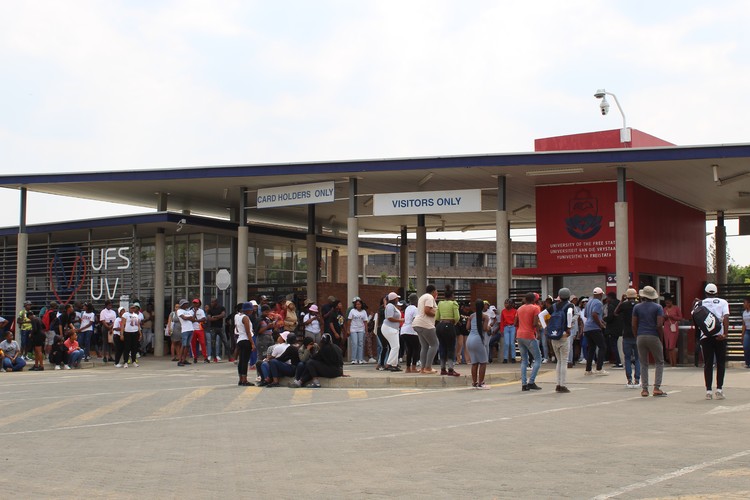 Hundreds of students block the entrance at the University of Free State’s Qwaqwa campus in protest over NSFAS accommodation allowances, among other issues. Photo: Yamkela Mopeli

Lectures at the University of Free State’s Qwaqwa campus remain suspended on Thursday following protests by hundreds of students this week.

On Wednesday, protesters blocked one of the entrance gates, demanding the university answer questions about the payment of allowances by the National Student Financial Aid Scheme (NSFAS). According to their memorandum of demands, the students want the application period for private accommodation extended to 14 October; for funds to not be paid directly to private accommodation landlords; funds for transport they claim have not been paid for seven months; and for the campus to approve students without funding, among other things.

Student Representative Council (SRC) deputy president Nqobizitha Zwane said, “All we want is to show them how unhappy we are regarding the issues in our institution which are not favouring us as students.”

Zwane said students made several attempts to resolve the complaints but believe management backtracks on agreements. Zwane claims this is the eighth protest by students this year alone.

Lintle Taioe, a final year Arts student, said their problems started earlier this year when new management was elected. She said the first hurdle was a delay with payment for their book and food allowances. Taioe, like many others, is still waiting for an outcome on funding for private housing. “Previously, each student received R3,400 per month for accomodation but things changed when it was reduced to R2,450 due to Qwaqwa being in a rural area,” she said.

Taioe’s current rent is R1,720 which she pays using her food allowance of R1,500, while she waits for her housing allowance to be approved. Her parents, who are unemployed, help her pay the rest when they make enough money doing piecemeal jobs.

Lerato Ramanemane said her application was approved by NSFAS on 14 August but is yet to get her money. “The money reflects on my academic database, but not in my account. My landlord hasn’t been paid, so I have to pay the R1,200 rent from my pocket. I’m really struggling this year because my parents are not working.”

Campus vice principal for support services, Teboho Manchu, said the issues raised by students “are complex” and won’t be resolved without proper consultation with NSFAS.

Manchu said that under the new NSFAS guidelines, payment for private housing is now paid directly to landlords. “Because of our environment, there are certain services which are provided by the landlords and others which students have to fend for themselves,” said Manchu.

He said the university has applied to NSFAS for a deviation from the current practice “in order to cater for aspects that would be unfair if full funds were paid directly to landlords who do not provide things like Wi-Fi. We want to instead give that money to the students so they can buy data themselves.”

GroundUp has asked NSFAS for comment on the students’ demands. Their response will be included once it is received.

Next:  Children caught using cannabis will no longer be criminally prosecuted