Wandile Nsibande has spent ten years as a prisoner in Westville Prison, Durban.

“At this point I fear nothing,” he told GroundUp. “They cannot do worse to me than they already have.”

He said last year he endured a severe beating. It left him with two broken fingers. He now struggles to play his saxophone. Since childhood he has loved jazz. He started music lessons in the prison and in 2012 his mother bought him a saxophone. He organised charity events and started performing with the prison band.

Nsibande was sentenced to 25 years in 2009 when he was 19 years old. “Coming to prison I was devastated and scared that I was being taken to the worst criminals … I had made that one mistake that cost me my whole life.”

“Little did I know that the people I should be [most] scared of are actually some of the prison wardens. They are the most cruel people I’ve ever met … Not all of them, but most of them have been abusing me for the past ten years,” said Nsibande. 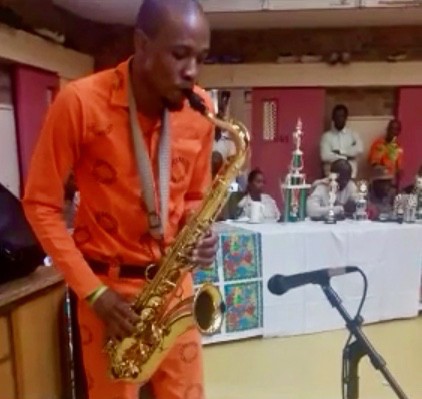 He said the first time he was assaulted by prison wardens was just two days after arriving. He and his co-accused were beaten in front of a police captain. “I had blood coming out of my ears,” he said.

He reported the incident to the head of the prison and opened a case, but nothing ever came of it he said. “I knew nothing about the law and I was too afraid to even follow up on the matter.”

In 2017, during a search of the prison cells, he alleges that he and other inmates were assaulted. Then in May 2018, he said he complained about the food – the mealie meal, cabbage and eggs which inmates had eaten for weeks on end.

“I was also asking for my laptop and saxophone that was taken from me [because he was going to be transferred to another prison]. I was told [by the wardens], ‘We don’t take orders from you. You think you better [than us] because you play the saxophone.’ That’s when I was handcuffed and forced to come out of my cell. When I refused, they assaulted me.”

Nsibande said he was kicked and beaten with batons and fists. He said he was hit so hard on the chest that he vomited blood. Two of his fingers on his left-hand were broken and he had an unbearable pain in his chest. He said he was given some painkillers.

Nsibande said he had opened two cases of assault for the 2017 and 2018 incidents.

But spokesperson for KwaZulu-Natal correctional services Thulani Mdluli said, “It must be mentioned that in this particular point in time, there are no assaults by officials on offenders that have been recorded and reported.”

GroundUp however has case numbers for both assault cases and managed to confirm one of the assault cases which was opened in 2018 at the Taylors Halt police station in Pietermaritzburg. An officer told GroundUp that the investigation was still ongoing.

In terms of the 2017 case, opened in Empangeni at the Empangeni police station, GroundUp was told that information regarding cases could not be given over the phone. The officer refused to confirm whether the cases existed or not.

“The Department of Correctional Services has a policy which requires that inmates’ complaints and requests be registered and addressed on a daily basis. These, when reported, are dealt with in accordance with policy and are investigated,” said Mdluli.

He said the use of force by officials was strictly prohibited but “minimum force can be authorised to defuse any awful situations”.

Nsibande complained that conditions are poor at the prison. “There are about 40 people in one cell, sometimes 60, and the cell is only supposed to take 19 people. There’s only one toilet that works and one shower, which only has cold water.”

Mdluli agreed that overcrowding was a problem which the entire national department faced. “As the end user of the criminal justice system, we have no control on the numbers of offenders to be incarcerated.”

He said Nsibande’s complaint about showers and toilets are “absolutely untrue”.

“We commit ourselves to daily maintenance of hygiene of the facilities as well as the offenders. We also spend a sizeable budget for proper ablution facilities. We therefore have ablutions that meet health and safety standards in that centre,” said Mdluli.

But Nsibande said: “I don’t feel safe nor [do I] believe in the South African justice system anymore, due to individuals who keep using their power to hurt others, and corrupt investigators who do not investigate reported cases pertaining to wardens assaulting prisoners. Prison is supposed to be a place where I can be rehabilitated and improved to be a better man, but instead, in my experience, it is a place where you are hated for trying to change and improve your life.”

Previous:  We need lights to keep each other safe, say occupiers of Waterfront property

It is appauling to know that a place where our brothers, loved ones are kept in a place where it is suppose to be safe but turns out to be a total opposite.
My heart feels for Wandile Nsibande, not just him, but all the prisoners that have been abused just for the fun of it. What is South Africa becoming honestly?

I'm deeply saddened that proper precautions have not yet been taken. It seems like we are forgetting that inmates are humans too, its punishment enough to be kept away from the outside world. I fail to understand why inmates are being abused.

Let us all support the inmates to get through this tough life there are forced to live because it seems as though nothing is being done.

I am by law not allowed to speak to media about the things that happen inside prison as it is against our policy but I would break the law for someosomeone like this boy Wandile Nsibande. I have worked for the department for 28 years of my life and he is one of the few convicted prisoners I would vouch for.

The boy has done the most amazing things some are even hard to believe not just for himself but for the Department, other inmates, parolees, the elders inside and outside prison, youth and woman he's a True inspiration to everyone including myself I regard him as my son.

I know the court sentenced him after talking to him he always tells us he does not want to talk about his crime because he was illegally sentenced to the harsh sentence he did not deserve and we cant help him. And i believe him the boy is the kindest, caring, generous, hard-working and dedicated young person I have ever seen.

His first year in prison he finished his Civil Engineering studies then began learning Music on his own his mother bought him a Saxophone he learnt on his own and began doing charity and community events inside and outside of prison.

He uplifts and empower everyone in need. He's not into gangsterism and he's a happy soul always smiling, he left to Qalakabusha Prison 2017 to do R100,000 fundraising concert with Mandla Mdletshe Ukhozi FM for FeesMustFall campaign And I was happy to hear my boys name on radio, tv and newspapers its made me proud little did i know that he will be treated in such inhumane manner.

Thulani is my superior yes but he must stop lying and help the boy the whole nation needs someone like Nsibande.

Evictions: When is a shack occupied and when is it not?