Teargas canisters, stun grenades, rubber bullets and stones hurtled through the air as police clashed with community members while two Nyalas drove in and out of the area for several hours. The police kicked in doors, as they searched house to house.

“Police are busy with a provincial operation in Hangberg of which details cannot be divulged at this stage until the operation is complete,” said police spokesperson Sergeant Noloyiso Rwexana.

Ward councillor Roberto Miguel Quintas said, “SAPS has been undertaking various crime prevention activities in the area”. He said that many of the residents of Hangberg have “asked for SAPS to carry out their duties in the area”. 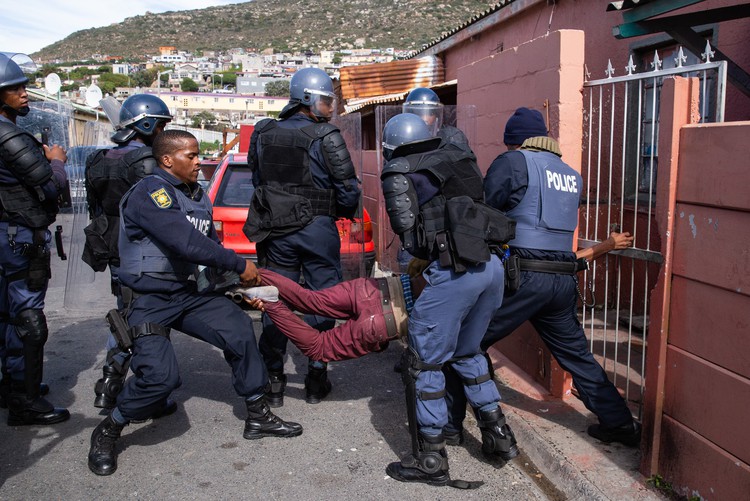 A suspect is dragged out by and later arrested by police.

David Weeder, 65, said he is a former policeman and has been living in Hangberg for 45 years. “This needed to happen. Our youngsters need to do the right things so they can become something. There have been many complaints about the crime here.”

But not all residents welcomed the police presence. “I am sick and tired of this,” yelled Anita Jane Africa, 49, who was shot by a rubber bullet. She said each time the police come to Hangberg she keeps her children indoors. She said she wanted to take her child to the day hospital but could not because of the chaos. Residents said both the high school and primary school were closed on account of the police presence.

We saw three undercover police officers climbing out of a Nyala that had emerged from Hangberg. Africa said that the officers she encountered were also in plainclothes.

Weeder said he thinks that police were searching for poached abalone, illegal firearms and drugs. This comes amid protests and tensions over the disappearance of Hangberg fisher Durick van Blerk.

“They came in with a lot of guns, and just started hitting doors down. It just went crazy,” said Edward Carolissen, who fishes for a living. He said he stands by his activities as a poacher. “There’s no work for us here. We must live from the sea … I’ve got a boat. They cut our fishing rights. We must work for two months. Then we must stay at home for ten months. How are we going to feed our family? It’s not right.”

Carolissen said he has applied for a fishing permit but that “no one gets quotas here”. He said he supports “six, seven families”. 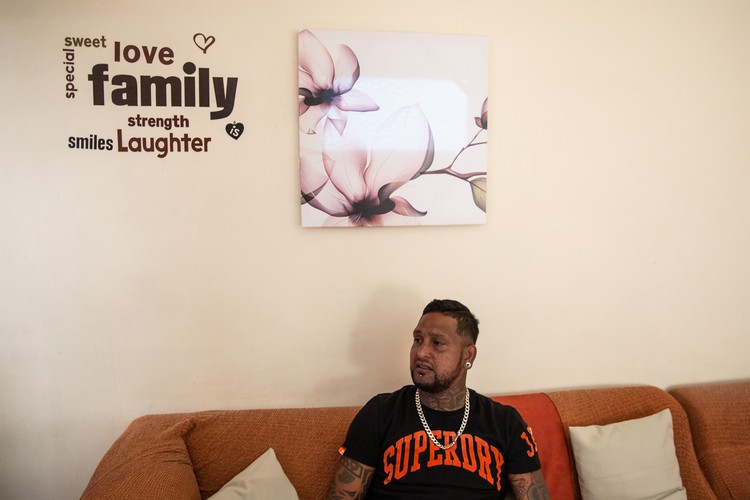 Edward Carolissen fishes for a living. He said he stands by his activities as a poacher.

However, a community member who asked to be referred to as “Shorty” said the poaching is “not about putting food on the table for your family, it’s more like ‘I want to show people I have money’”.

“Shorty” said that “if it is what they say it is regarding drugs and abalone, I think they (SAPS) are doing a great job. We all are raising kids out here … If you look at the future of the kids and the way the drug lords are using these kids to sell their drugs and poaching and stuff like that.” 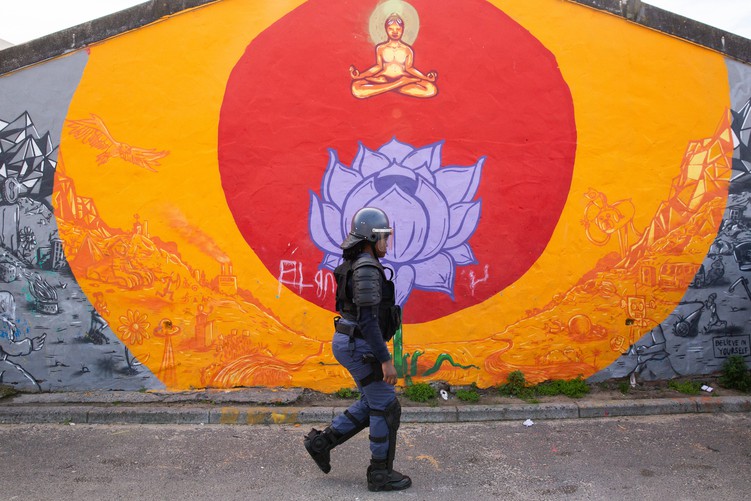 Next:  Puppets bring the dangers of drugs to life

I am a resident in Hout Bay and have been in the fishing industry for the last 23 years. What is currently happening in Hout Bay is not just about poaching the main problem is unemployment. President Jacob Zuma set a precedent of corruption. If people in government steal then they are protected, when a honest person steal a bread to provide a meal for his family he will get a six month jail term.

The government promised to provide jobs for the poor. What happened to the ANC's plan to create jobs through operation Phakiso? If the government and business can't provide jobs, then people have to find a means of income. However poaching is no longer a means to provide for the family. It the younger generation who is abusing the sea resources for self gain and to fight for territory. The biggest poachers is the police themselves.

They are on the payroll of the poachers. They even tip off the poachers if there are raids. They make the police records disappear before the cases even reach the courts. We need a corrupt free police who can protect all South Africans. They must be screened and held responsible.

How is it possible that poachers never get caught? The police take the shipment away and then sell it back to the poachers. This is nothing new. The station commander is aware of it, but never takes action on the information. People like us are afraid to give our names and to expose ourselves. We will get harassed with flares onto our roofs and our homes will burn to the ground.

The harbour control officers are all involved in these scams. They get paid to look away and allow these crimes to happen daily. Just look at their life styles and cars they drive. The government of the day is failing its people. The honest people in the fishing industry get penalised and our quotas cut yearly.

The real problem in the community is the poachers in the middle. The two brothers Boksie and Gavin don't forget Joe Delcarme. They are the people using the young youths to poach. These poachers even have people on Robben Island who tip them off when to poach.

This show of force is totally unacceptable and must be rejected with contempt! This is how the DA government and the ANC deals with the poor. They failed dismally to solve the unemployment crisis our communities face. They did this to Marikana, they did it to Andries Tatane, they did it to Abahlali..... and many more. We, the people must put a stop to this. Their pockets are full of corruption and the people suffer. They don't care!

According to Stats SA (2011), unemployment rate is around 27 percent. We know it is much higher than that, closer to 40 percent now. This picture is even worse for the youth. So the ANC and the DA wants to mange poverty with a gun. No! we must stand up. If we could stop the apartheid government, we can stop them.

South Africa is the most unequal country in the world according to the world bank. The gap between the rich and poor is increasing rapidly. Housing and education among others are major challenges in South Africa. So when the people of Hangberg want to eat from the sea, they are stopped by the DA and the ANC. This cannot be tolerated.

Communities, trade unions and social movements must unite. We have the power to stop them.