Eyewitnesses describe police beating a man who had a mental disability

IPID appears not to have interviewed key witnesses

The office of the Western Cape Police Ombudsman says it is wrapping up its investigation into police at Lingelethu West station, after the arrest and death of 22-year-old Sipho Mpinda.

“We can confirm that we are in the process of finalising our investigation,” said spokesperson Deidre Foster. “A complaint of unacceptable behaviour and poor communication was investigated.”

Nomakhaya Makeleni reported to the ombudsman on 24 June after Mpinda, her son, was found dead.

“We want the office to investigate why the police released Sipho even though they could see he was mentally disabled. As police, they should have looked after him and ensured that he was safe,” said Makeleni.

Mpinda was found dead in Lentergeur. At the time, police said criminal and departmental investigations were underway. Asked about progress, SAPS Western Cape said: “Internal matters are addressed as such, and we do not disclose information of this kind.”

In June, the Independent Police Investigative Directorate (IPID) also looked into the matter. The ombudsman only investigates “complaints of police inefficiency … or a breakdown of relations between the police and any community”; it is IPID’s job to investigate alleged serious crimes committed by police, such as assault, not the ombudsman’s.

Spokesperson Moses Dlamini said then that a preliminary investigation had “established that Mr Mpinda was run over by a truck belonging to the City of Cape Town … There is no evidence that his death was due to police action. As a result the docket will be handed back to the SAPS for further investigation.”

Dlamini also said: “The allegations of beating [at the time of arrest] have not been corroborated by witnesses or [CCTV] footage. In such matters, it is important to follow evidence.”

However, eyewitnesses GroundUp spoke to tell a different story. They say they saw Lingelethu West police beat up Mpinda in the Khayelitsha Mall parking lot when they arrested him.

Mpinda had arrived with his friend, Loyiso Feke, who left him at the car while he went into the mall. This is when police arrested Mpinda.

Thembelani Krocolo, who sells traditional herbs nearby the mall, said: “I saw the police officials kick, slap and hit him on the head while his hands were handcuffed … He could not fend off the cops with his handcuffed hands, so he resorted to groaning instead of trying to run away or defend himself.”

Krocolo said: “One police [officer] held his handcuffed hands while the other slapped him on the face. The police were wrong to beat a person who was not even fighting back.”

“I last saw the police beat up a person the way they did during apartheid when police were enforcing pass laws.”

Krocolo said neither police not IPID investigators had interviewed him.

Funeka Valashayisa, a fruit vendor, said she was at the Shell Garage buying paraffin. “When I returned from the garage, a car attendant told me that he saw cops beat up someone who could not even speak. I was shocked,” she said.

A Bed City employee said he had finished work at 5pm. “I saw the police slap and drag him to a waiting van nearby, but I could not watch the whole beating as I was rushing home. I thought he had robbed someone.”

He said no one had interviewed him about the incident.

Sakhekile Dunjwa, who guards cars in the parking area, said: “The police kicked him while he was lying down until he was covered in dust.”

Dunjwa said: “One woman from the nearby clinic angrily shouted at the cops to stop beating him, but they also angrily asked if she could not see that cars were getting stolen there.”

He said no one from IPID or police had interviewed him either.

“We are all disgusted with the incident and the behaviour of the police here,” he said.

An employee from Old Mutual said she also witnessed the incident. “Several times I heard Sipho say sorry to the cops, but they ignored him and continued to beat him.” She said he had at first resisted being handcuffed. “After his friend told me that he was mentally disabled, I understood why he behaved differently from ordinary criminals who normally obey the police.”

She also said on-lookers screamed at the cops, but they said they were arresting a car thief.

“It broke my heart to see the police kick him and shove him into the van like a dog or a cow,” she said.

She said she had not been interviewed by police or IPID.

When Feke came out of the mall and was told what had happened he went to Lingelethu West station, arriving at about 5:20pm that Thursday.

“The police said they released him after they noticed that he was mentally unstable,” he said.

She said: “I was shocked to see blood flow from a huge bloodied lump on his head and drench his Kaizer Chiefs jersey.”

The family and local residents unsuccessfully searched for Mpinda in Ilitha Park and Harare. “We even shouted over a loud hailer for residents to show us where Sipho was,” said Mpinda’s sister, Nobuhle.

Residents also combed Ndlovini informal settlement and Harare until the early hours of Saturday morning without success, she said.

Community leader Malanga Mkhatshelwa said he organised residents to search for Mpinda on Saturday. “We split into two groups and checked all over Khayelitsha for Sipho but failed to find him … After we failed to track him down, we as a community met and made a decision to march to the police station and demand that the police tell us where Sipho was.”

On Monday morning, a police official came to the family home and asked them to go to the mortuary and identify the body.

“When I asked the police official why he thought the body lying at the mortuary was Sipho’s, he showed us his photo on his cell phone … We were shocked because we were still hoping that we would find him alive eventually,” said Nobuhle.

The police official said the truck hit and killed Mpinda at about 4:30am on Friday, she said. “A police official told us that the driver told the cops that he saw old, dry blood on Sipho’s face,” she said. “We still wonder why the police only told us about his death three days after it happened.”

If the ombudsman’s office found that police broke the law, Foster said, “A recommendation will be made to the Provincial Commissioner of Police for the appropriate action to be taken against the officials … The Western Cape police would be responsible for implementing the ombudsman’s recommendations according to their internal procedures … The sanction, however, is at the discretion of the SAPS in line with their disciplinary code … This essentially means that we will not be responsible for disciplinary action against the official.” 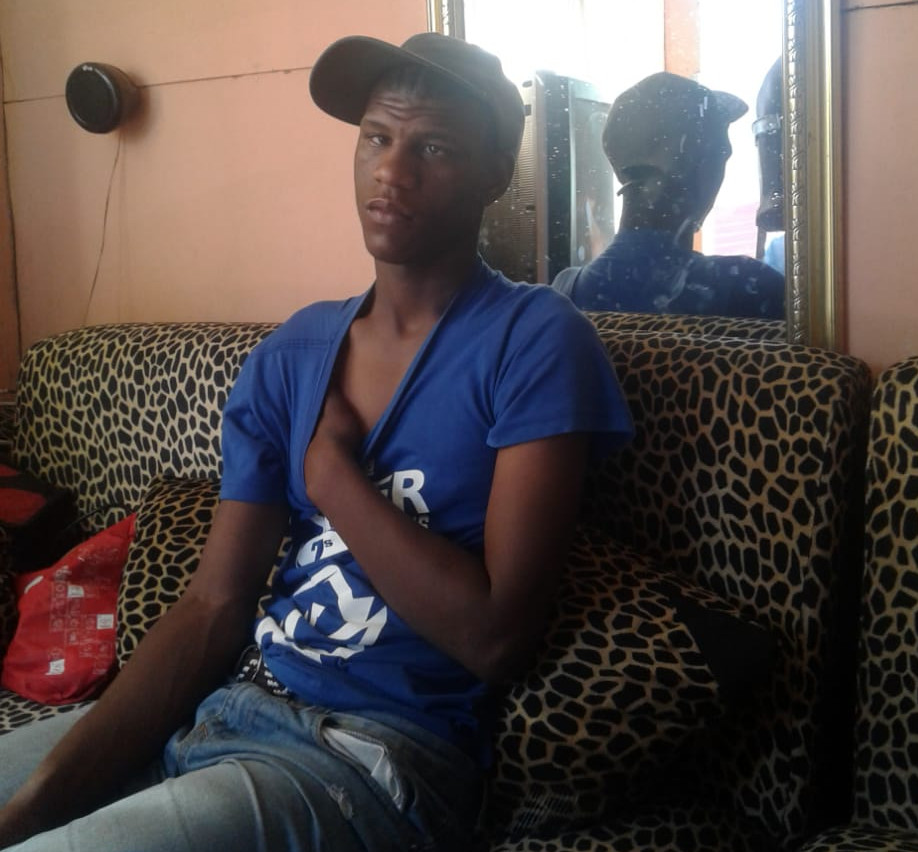 Sipho Mpinda, 22, was arrested at Khayelitsha Mall and transported to Lingelethu West on Thursday 6 June. Eyewitnesses told GroundUp he was beaten. Previously, IPID said eyewitness accounts and CCTV footage did not corroborate accusations that Mpinda was beaten. Photo supplied

4:30pm: Loyiso Feke in his Avanza goes with Sipho Mpinda to Khayelitsha Mall to buy birthday gifts for Feke’s child. He leaves Mpinda, who has cognitive disability, with the car.

Police arrest and beat Feke apparently accusing him of intending to steal or break into cars (several eyewitnesses have told GroundUp).

5pm: Feke returns to his car and finds Mpinda missing. He is told Mpinda was beaten and taken to Lingelethu West police station.

Mpinda is seen being dragged into the police station, bleeding (according to one eyewitness).

5:20pm: Feke arrives at Lingelethu West. He is told by police that Mpinda was released when they realised he had mental disability.

7pm: Mpinda’s sister, Nobuhle, and members of her family go to the police and get the same response.

They search for Mpinda in Ilitha Park, Harare, and Ndlovini.

4:30am Mpinda is hit and killed on Swaartklip Road by a truck belonging to the City of Cape Town (Nobuhle says police told her).

The family uses a loud hailer and puts up photographs of Mpinda in Harare, and Ilitha Park. Residents go to Lingelethu West. Police tell them Mpinda resisted arrest and was difficult to subdue. They say they released him (residents told GroundUp).

The community mobilises and lead by Malanga Mkhatshelwa stage a protest at the police station, demanding to know where Mpinda is and for police to help find him.

In the morning, a police officer visits Mpinda’s family shack in Town Two and tells them he was found dead in Lentegeur and his body needs to be identified at the morgue.

Residents again protest outside Lingelethu West Police station, this time demanding police pay for the funeral and that the police who they say beat Mpinda be dismissed.

Mpinda’s family ask the Western Cape Police Ombudsman to investigate the police behaviour on the day of his arrest and release.

The family buries Mpinda beside his father’s grave in Ngcobo, Eastern Cape.

Next:  District Six: Why judge described minister as “reckless and grossly negligent”