Police and students clash in Grahamstown

Students at Rhodes University* protested yesterday following the attempt by the university’s management to resume academic activities on campus at 10:30am. Protesters have been demanding a continued academic shutdown, with the Student Representative Council (SRC) calling for a boycott of the academic programme until negotiations are adequately concluded.

A meeting was held prior to the commencement of the academic programme on Wednesday. “The meeting lined up admin and the two unions to say that we were back to normal without actually changing the reality on the ground. Then they [administration] called in the cops as soon as the SRC’s stay-away call started to take effect,” explained concerned staff member Philip Machanick.

Following their arrival on campus, police officers pepper-sprayed students in response to the disruption of a lecture. Following a disruption at the Law Faculty, officers arrested four students and pepper-sprayed several others. Police intervention was mandated by an interdict placed against the student body by university management.

As several hundred protesting students moved to Prince Alfred Street in retaliation to the Law Faculty arrests, numerous police vehicles – including Cradock Public Order Policing – parked in front of protesters, as blocking a public road is a breach of the interdict.

Subsequently, students moved towards Drostdy Lawns along the pavement, a few were armed with stones and a bottle. Police fired multiple stun grenades in response to stones thrown by a small number of protesters. The crowd dispersed swiftly, running to the Lawns for protection from further aggression.

Students stood on the Lawns, arms above their heads, pleading with officers who had loaded their shotguns and took up positions on the wall separating the lawns and the public road. In response, officers began to fire rubber bullets, taking careful aim at individuals as they ran for cover.

“We lay face-down on the ground with rubber bullets flying over our heads. They would not stop,” said student Oliver Momberg. A student hiding behind the wall during the shooting was dragged over it by officers in order to arrest her. Despite the crowd’s rapid dispersal and pleas for officers to cease fire, police did not stop shooting for approximately five minutes.

Currently, 11 students are in police custody, and three students have been transferred to hospitals in Port Elizabeth to undergo operations for injuries sustained. Students are attempting to raise R30,000 for the application for the arrested to be seen in the High Court, as the Magistrate’s Court will not allow them to appear today. Should students fail to appear in High Court, they will be detained until Monday.

The university’s Communications and Advancement Division, stated: “We are disturbed by the video footage that we have seen and we will engage the [South African Police Service] around their handling of the situation.” The academic programme remains scheduled to continue on Thursday.

* Student protesters are referring to the university’s name as The University Currently Known as Rhodes. Our reference to it merely as Rhodes is simply a reflection that that is its current official name, and therefore what news reports have to refer to it as. It is not intended to disrespect the movement to change the university’s name. 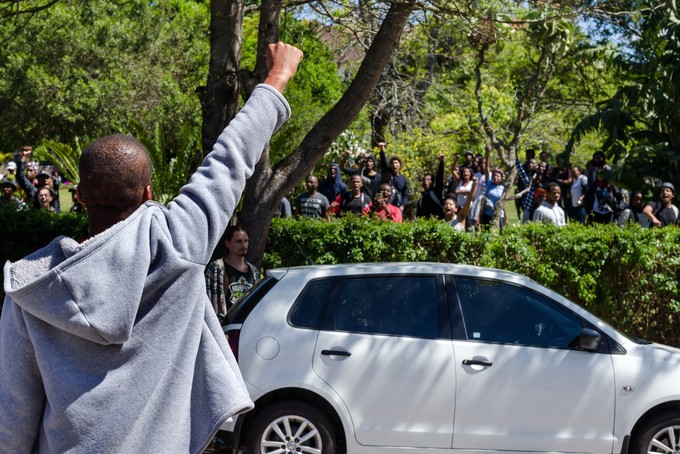 Next:  Doctors and nurses out of touch with patient experiences

Previous:  In photos: clashes at University of Johannesburg