The workers are demanding higher wages and the residents of the town demand electricity, water and a police station 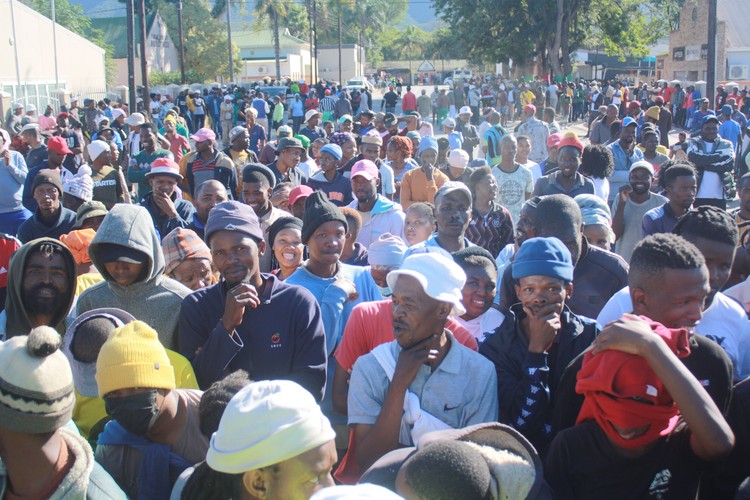 Parts of Kirkwood ground to a halt on Wednesday morning as more than 2,000 workers and residents marched to Sundays River Valley mayor’s office. Photo: Thamsanqa Mbovane

Over 2,000 farm workers and residents of Kirkwood and Addo in the Sundays River Valley Municipality, Eastern Cape, shut down parts of Kirkwood on Wednesday morning. The workers, supported by the South African National Civic Organisation (SANCO), are demanding R30 per hour.

The workers say they currently earn between R18 and R23 per hour, depending on the farm. They also complained about having to pick and pack a set daily target of oranges or vegetables.

“We earn peanuts every week and fortnight, yet the rich become richer,” shouted one of the workers as he marched with the crowd.

Residents of Kirkwood say they joined the protest to voice their unhappiness with the delivery of services in the township. They want streetlights, water, tar roads in the township and a satellite police office station.

Petitions were addressed to the municipality, SAPS and farm owners in the region.

SANCO’s Zwelimnandi Rooibard told GroundUp that residents were desperate for electricity and that crime was on the rise in the community, with cable thieves stealing cables connected to RDP houses.

He said they had taken on the fight of farmworkers too because unions were no longer paying attention to their plight. Rooibard said they wanted farm owners to agree to hire 30% immigrants and 70% local people.

Outside Mayor Simphiwe Rune’s office, police officers stood guard as protesters waited for the mayor to listen to their demands.

Rune came to accept the petition with SAPS Colonel Robbie Riekerk. They both promised to respond to the demands within seven days. There was no representative of the farm owners.

Rune told GroundUp that he would write to Eastern Cape MEC for Rural Development and Agrarian Reform, Nonkqubela Pieters, about workers’ issues. He said it was unfortunate the farmers had not come to receive the petition.

Next:  Disciplinary hearings: some schools are flouting the rules