Families fear the two-storey building will collapse on them 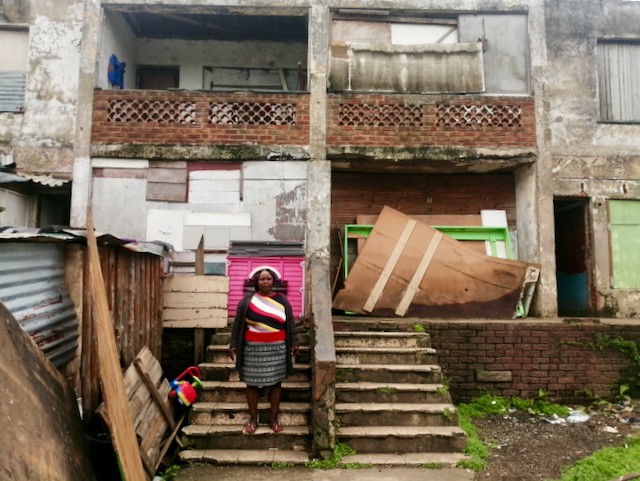 Nomalungisa Tyololo has been living in 124 Smithfield Road, Kenville, for 18 years. She says it is no longer safe and fears it will collapse. Photo: Nokulunga Majola.

Over 70 people occupying a dilapidated building in Kenville, north of Durban, say they want to build shacks nearby as the building is no longer safe, but they are afraid their shacks will be demolished.

Most have been living in the building for about 20 years.

According to the residents, the two-storey building, 124 Smithfield Road, belonged to a Selvin Govender, and he gave them permission to use it. But this document has been lost, and they cannot recall the name of the attorney who handled the matter.

The building has more than 30 rooms and there is an outside building which is also occupied. Toilets have been turned into bedrooms. The drains are blocked. Residents use pit latrines and have illegal water and electricity connections. Garbage is not collected by the City of eThekwini but dumped nearby.

Slindile Mkhize, who has been living in the building since 2013, and has two children, says the building is no longer safe. A fire in 2010 damaged the roof and it was never repaired. It leaks so badly it is like having no roof at all, said Mkhize.

“It can collapse anytime,” said Matyakalana Thulisa, who lives with seven family members including grandchildren in one tiny room. “If we could, we would find another place to stay but we have been waiting here for years to be moved but nothing. People from the municipality come here to check on us, make promises and leave.”

The residents say City officials have been to the building many times, and visited last in November 2020. They say the officials promised they would be housed in Cornubia City, a new development in the north of the city.

Outside the building there are a few shacks. One is a spaza shop.

Committee member Nomalungisa Tyololo and her husband live with their daughter. They showed us their quarters. “This is actually the veranda but we closed it off so that she can have her privacy because she is too old to be sharing a room with her parents. My other two children have their own rooms, one of which is a toilet turned bedroom,” she said.

Tyololo has been living in this building for 18 years. “We cannot afford to fix the building. It has gone beyond fixing. It needs to be demolished. But all we are asking for is to use the land next to the building to build shacks so we can go on with our lives,” said Tyololo.

“We know the place is filthy, but what can we do? We are tired of waiting for the City to move us,” she said.

“We have no knowledge of any promises to move people to Cornubia,” said EThekwini Municipality spokesperson Msawakhe Mayisela.

The rooms have numbers on the doors which residents said were put there by City officials. Mayisela denied this.

However, Ward 34 Councillor Bobby Maharajh (DA) said he had visited the building with the City’s department of housing late last year. “We engaged the residents and I agree that the building should be demolished. Occupiers cannot just build on the land. Proper consultation should be done with the property owner and rate-paying residents.”

“The people living in that building are very kind and respectful. If the building is demolished they should be moved; they cannot just be thrown out,” said Maharajh.

GroundUp was unable to contact Govender or Smithfield. An internet search suggests Smithfield was liquidated.

Next:  Is this the worst-run municipality in South Africa?