Municipality fails to pay its workers their May salaries

Community leaders call for Amahlathi municipality to be disbanded 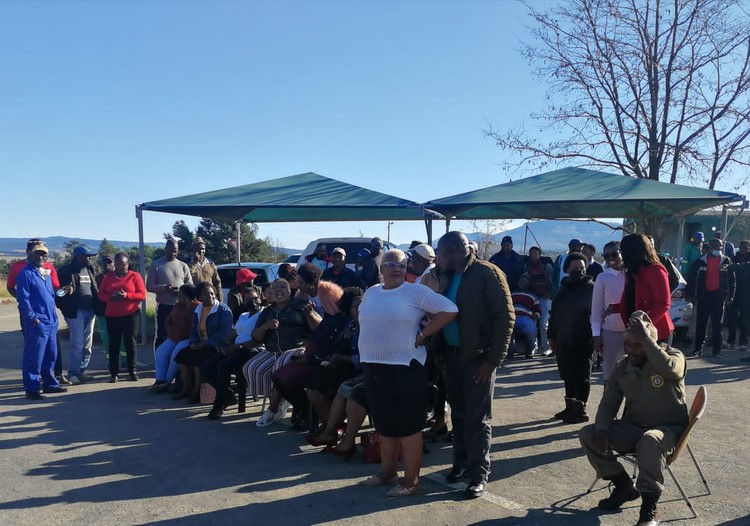 Amahlathi municipal employees meet to discuss their predicament. Once again they will be paid late. Photo: Johnnie Isaac

Municipal workers in the struggling Amahlathi Local Municipality in the Eastern Cape have not been paid for May.

The salaries of 260 employees were due on 25 May. But Amahlathi Chief Financial Officer Lubabalo Manjingolo says May salaries will not be paid until mid-June.

The municipality has a history of failing to pay employees though managers have been paid huge travel allowances. Residents have complained for years about municipal failures. In 2018, youths angered by unemployment and nepotism took to the streets and burnt down the municipal offices, a local clinic, and the newly built Mlungisi mall. In 2020, youths were once again on the streets protesting.

When the municipal workers were not paid their February salaries, the municipality made a credit arrangement with Pick n Pay in Stutterheim for the workers to access food vouchers and Manjingolo said that facility is still open if workers are willing to make use of it. However, workers are rejecting the offer.

Workers’ representative Thembela Magwangqana said it seems no one is willing to save Amahlathi.

Magwangqana said they have been asking the provincial Treasury to intervene. “There’s illegal use of funds but no one is taking responsibility. If it was a junior official who misused the municipality funds, letters of suspension would be flying by now.”

Community leaders who spoke to GroundUp are now calling for the municipality to disband.

Thembinkosi Kolobile from Kei Road said everyone has failed at Amahlathi and it’s better that the municipality is disbanded. He said the roads were bad and the sewerage system was broken. “We lack everything and no one is talking about it. The Premier was here but did nothing,” he said.

Fumbatha Mabizela from Stutterheim said: “This municipality is sinking slowly but surely. We protested. Promises were made. But zero changes.”

“We do not have houses. Our roads are bad. We lack water. The only thing our officials are good at is to point fingers,” he said.

Eastern Cape government spokesperson for Cooperative Affairs and Traditional Affairs (COGTA), Mamkeli Ngam, said, “The situation at Amahlathi remains a cause for concern for the department and we would like to see it resolved. We call upon the leadership of the municipality to work together and find a solution to its problems.”