Report on blaze could lead to closure of Durban Herbal Market

Angry informal traders blockaded Joseph Nduli Road, Durban, on Tuesday afternoon by piling up muti sacks on the road. They are demanding the municipality collect burned debris after a fire swept through part of the traditional medicine market in Warwick Junction on Sunday night.

Traders, many of whom lost everything in the fire, said it was the City’s responsibility to clear the burned debris.

In protest they burned muti on the road and what was left of their stalls. The fire department arrived to extinguish the fire. The area was closed to traffic.

“This is just the beginning. We will do it again if they continue to treat us like animals. The City doesn’t take us seriously. We have so many issues that we need to address,” said Nomusa Ngcobo, a trader.

eThekwini municipality acting head of communications Mandla Nsele said that should a report on the Durban Herbal Market fire recommend that it be closed, the City would9comply and shut down the facility.

Nolibala Sikude, a 70-year-old herbal trader, sat quietly on a sack of muti counting her losses. “We started in 1987. I am one of a few people who were first to come here when the market was established and it is the first time in 20 years to have something like this happen,” she said.

Luckily she had not lost her trading documents and her identity document in the fire. She usually keeps them in the stall but had taken them home with her on Sunday.

“As soon as the dust settles, I will go out looking for herbs to sell because this is my livelihood,” said Sikude. 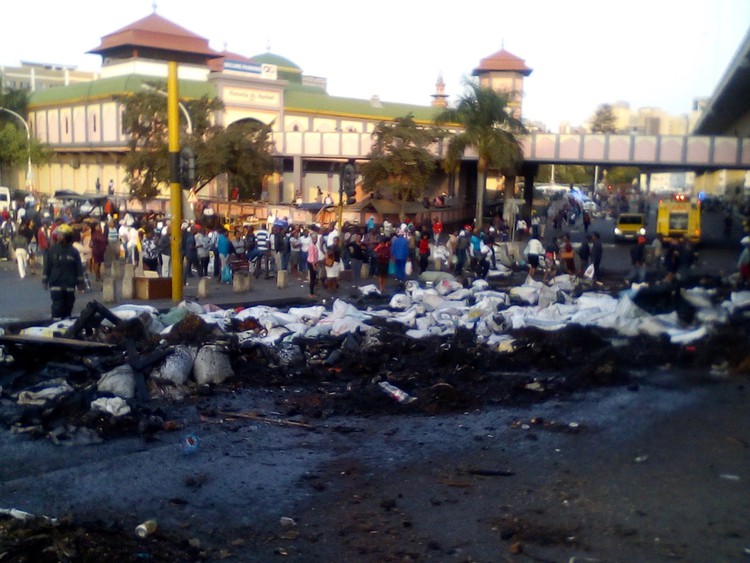 Chairman of the Traditional Healers Market Jabulani Gumede said 60 people had been affected by the fire. “Many people lost everything – stock and money. Rebuilding is not going to be easy.” says Gumede.

The market houses about 3,000 people according to Gumede.

The cause of the fire is yet to be established. The guard who was on duty says he was asleep when it started.

Muti traders are planning a March for Monday.

KZN Traditional Healers’ Association chairman Thandonjani Hlongwane said, “It was indeed a great tragedy and loss to the traders.”

Next:  Grade 8 learner sent home for having Afro hair