Mother without ID struggles for years to enrol children at school 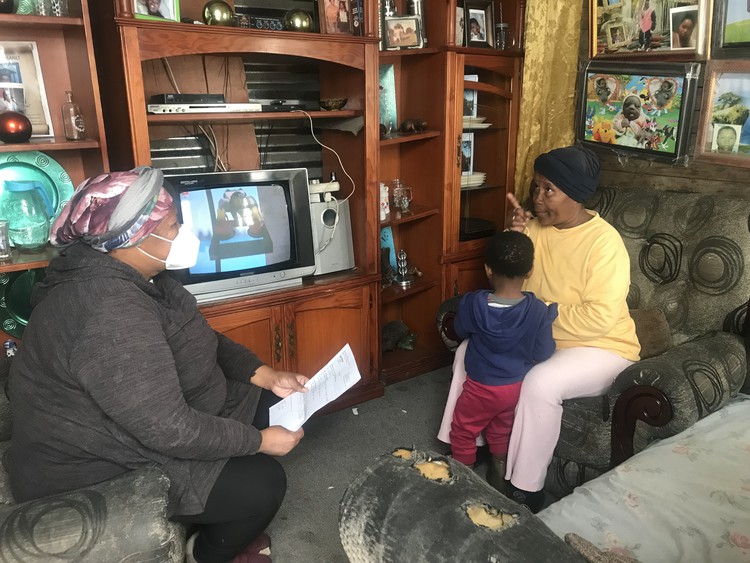 Edith from Kuilsriver, Cape Town speaks to soup kitchen volunteer Shireen Baker about her struggle for years to register all of her four children’s births because she does not have an identity document. Photo: Tariro Washinyira

Two children from Happy Valley township near Kuilsriver, Cape Town have never been to school. Their mother, Edith, is 50 and does not have an identity document. As a result, she has had trouble getting birth certificates for her children. Their father is also no longer in their lives.

GroundUp met Edith’s 11-year-old daughter while she was collecting food with her two older sisters from a local soup kitchen. Edith’s eldest son who is 21, only attended school until grade seven because high schools in the area refused to accept him without a birth certificate. Edith said that her 25-year-old daughter could also not write the matric examination for the same reason.

She said she gave up trying to find placement for her 14-year-old son but is desperately trying to get her daughter into a school. Edith has been to Dennemere Primary in Blue Downs and Happy Valley Primary several times since her daughter’s seventh birthday to plead for assistance.

She said the schools turned her away each time because her children don’t have birth certificates. “I went back to the same schools this year and explained that I have since been to Home Affairs … but I failed to get birth certificates. The two schools promised to enrol my daughter but we have heard nothing,” she said.

“The child is worried. She is now too old for grade one. There are very few schools around here. Dennemere where we tried is in Blue Downs. Highbury Primary is very far away and she will need transport,” she said.

While Edith was recalling her efforts to GroundUp about the issue, her daughter burst into tears.

“It’s like I don’t exist. My children’s futures are ruined. I can’t register them for school. They can’t get SASSA grants. I can only do piece jobs where people can give me cash,” said Edith. “This two bedroom shack we live in belongs to my sister. I must pay her R250 a fortnight but I haven’t paid her for many years.”

The family of six rely on the eldest son’s income as a construction worker.

Millicent Merton, spokesperson for Western Cape Education Department on 27 July said, “Schools require official proof that an application has been made to the Department of Home Affairs for a birth certificate or identity document.”

On 27 July Social Development spokesperson Joshua Covenant Chigome, said, “A social worker has been requested to follow up with the family and to assess what assistance is needed.” On 11 August, Edith confirmed that a social worker had phoned her and promised to contact the provincial education department to follow up on the matter.

Samuel Plaatjies, coordinator for Cape Metro Department of Home Affairs confirmed that a late registration of birth application was submitted in Bellville on 20 June 2019. He said that there had been a few “discrepancies identified during the verification process”.

Plaatjies confirmed that Edith visited the Bellville Office in person on 5 August where she was given “reasonable access to additional documentary proof” to address the discrepancies identified.

“The successful and expeditious conclusion of the late registration of birth certificate application is dependent on [Edith] submitting the mentioned documentary proof as promised,” he said.

On Wednesday, Edith told GroundUp that she is in the process of collecting the documents requested by Home Affairs which include her mother’s ID, her baptism certificate and a letter from her cousin confirming important dates like when her parents were married and the name of the hospital where she was likely born.

Next:  Small businesses in Gauteng may never open again after July riots

Previous:  State refused to help immigrant fire victims, so this organisation stepped up