“They can come to my office, but going to my house and insulting my family is wrong,” says Bongile Ngcani 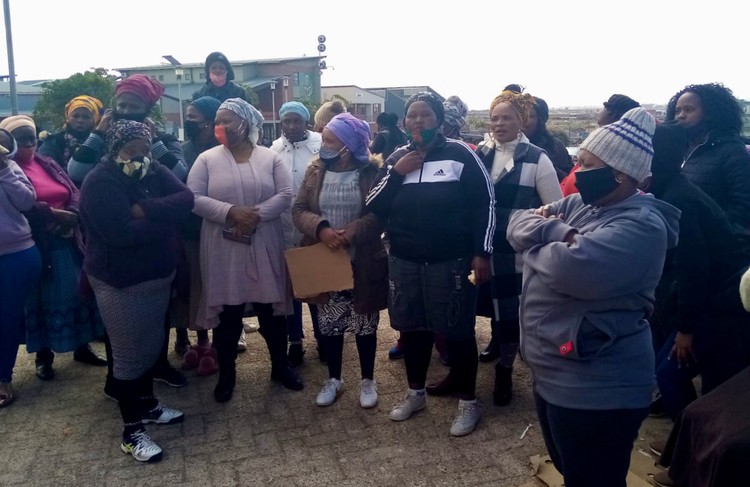 Unhappy with the distribution of food parcels, residents of Kuyasa protest outside their ward councillor’s office in Khayelitsha, Cape Town. Photo: Buziwe Nocuze

Over 50 protested protested outside their ward councillor’s office in Khayelitsha, Cape Town. They are dissatisfied with his distribution of food parcels in Kuyasa, the neighbourhood where they live.

Malusi Langa, a community leader, said food parcels were meant to be handed out to 200 residents in most need on a list which the councillor had requested. “We gave him the list, but when it was time to distribute food parcels he didn’t say anything. Instead he gave to his friends,” said Langa.

He said after their calls and messages were ignored, they decided to go to his office. “He didn’t want to come out of his office.”

But Ward 99 Councillor Bongile Ngcani (ANC) said he had feared for his life. “These [community] members went to my house [on Monday], singing in front of the gate and insulting my family. I was not there,” he said.

“They can come to my office, but going to my house and insulting my family is wrong. My family has nothing to do with what they are complaining about, that’s why I have alerted Law Enforcement.”

“I can’t risk my life by going out to angry residents who want food. I had to flee the area because the songs they were singing had a message,” said Ngcani.

“Councillors are being killed in KwaZulu-Natal and soon it will happen here in Khayelitsha because people are thinking about the next elections and they are doing anything to get votes,” said Ngcani.

Ward committee member Themba Gushman said food parcels are a sensitive issue because everyone wants food. “There is no truth in what they are saying. Food parcels have been distributed. We started in Ndlovini and Kuyasa, giving deserving people.”

“There are some community leaders who are giving residents wrong information to fulfill their needs,” said Gushman.

Next:  How government is supporting captive lion breeding