Khayelitsha business owner caught in “rain of stones” during protest 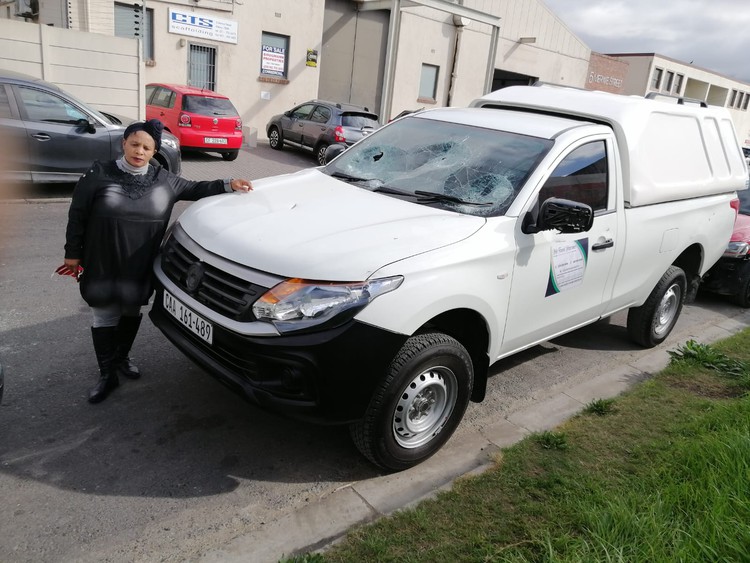 “I just saw two people come at me and throw stones at my bakkie. I managed to escape and drove home,” says Nelly Tom, as she recalled the terrifying moment she was injured when her car was stoned by protesters on the N2 on 20 July.

Tom, who owns a funeral parlour in Khayelitsha’s Ilitha Park, said her injuries would have been worse had it not been for her good driving skills. She was en route from Site C when she encountered the group who were protesting for housing and services.

“I was right in the middle of Victoria Mxenge Road towards Ilitha Park. While approaching an intersection. A rain of stones just came my way. I remember there were two people, one on the right and the other on the left of the pavement. In front of me were two Quantum taxis, they did not stone them.

“I stepped on the accelerator almost hitting the taxi in front of me. I then swerved to the other lane and went into a street in W-Section.

“As I drove off, they followed me, literally running next to the car as I was speeding. They hit my vehicle so badly especially the person wearing a maroon top who was throwing the stones on my right side. There were other people on the road as well, but these two were most visible to me at that moment. I don’t even know where they got the stones they were throwing.

“From where I was it took me about 20 minutes to get to my house and I was driving in terror. Not only was I shook, I was in pain because of the glass that came into my eyes,” said Tom.

She has minor scratches and bruising on her face during the incident.

Tom believes that the protesters saw her white bakkie with stickers and assumed that it was a government vehicle.

“We provide services to transport the body. My vehicle has stickers, clearly written Nelly Funeral Undertaker with a Khayelitsha address. Right now my bakkie is sitting in the driveway with no windscreen, no wipers, with dents everywhere,” said Tom.

She said the minimum cost to repair her bakkie is R20,000. She now has to outsource transport. “I run the funeral parlour from home. The bodies are kept in a storage facility at the Cape Town International Airport. But now this damage has set me back unbelievably.”

According to Tom, she has already lost more than R3,000 since last week. “To transport a body from Khayelitsha to the mortuary is about R750 per trip, but I don’t transport bodies every single day. The cost now is more to transport a Covid-19 body, a trip is about R1,000 so I am really losing a lot of money,” she said.

“Last week I lost out on a trip of transporting a body to the Eastern Cape. I would’ve made R12,750,” she said.

Tom has also been a taxi owner since 2013 during a transition change of the MyCiTi Bus Service. “At the time I didn’t have a husband in the taxi industry and most females in that industry were widowers. MyCiTi was looking for people to help out so I ended up working at the Site C taxi rank and eventually at the Khayelitsha Bellville route,” she said.

Tom said she currently invests 10% of the profits she makes from the funeral parlour and taxi business to get her foundation to educate youth off the ground.

“My plan is focused on education and taking a certain number of kids of high school age, to send them to better schools and paying their fees using the profit from both my businesses,” said Tom.