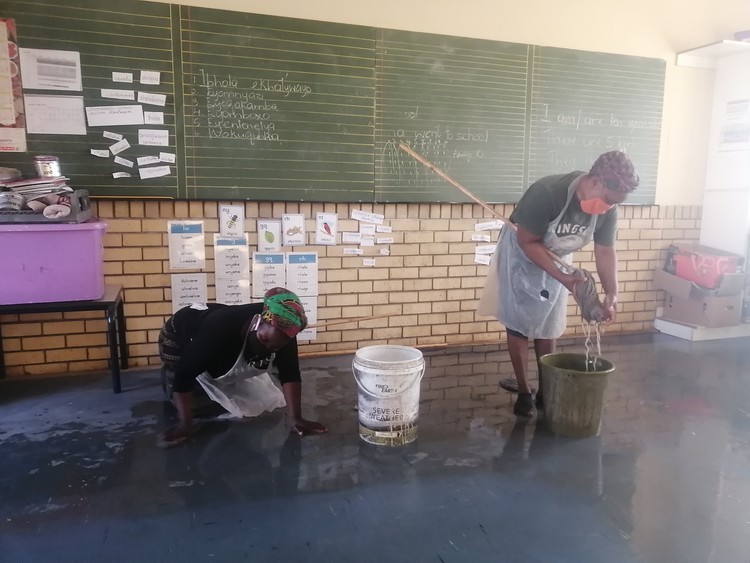 Parents cleaning classrooms at Joe Slovo Primary in Port Elizabeth ahead of the resumption of school for grade 7 learners on Wednesday morning. Photo: Mhkuseli Sizani

Parents at Joe Slovo Primary in Port Elizabeth have decided to send grade 7 learners back to school on Wednesday despite some serious challenges.

In early March, the school was shut down by parents for two weeks, demanding that steel palisade fencing be installed at the school.

Parents said teachers and learners did not feel safe as the school had become an easy target for criminals and had been ransacked five times since 2019. Stray animals and strangers have also been found roaming in the school yard during the school hours.

It is the only school in the area. It was overcrowded and under pressure as families from the surrounding wetlands were relocated to Joe Slovo.

In March the provincial education department committed to installing a new fence but the countrywide lockdown derailed these plans and the school was hit by vandals again.

When GroundUp visited on Tuesday afternoon, some parents were busy cleaning classrooms and younger children were playing on school grounds.

School governing body secretary Malisakhe Mthwalo said: “This is too much. Our school is vandalised daily and has become a playground for children. The main cause of this is the community itself. It encourages the vandals to keep on breaking our school by buying stolen goods.”

Mthwalo said that during the lockdown, the electrical cables and toilet doors were stolen as well as some of the labelled Jojo tanks. “It’s time the community of Joe Slovo decides whether it still needs this school. This is the only school in this area. We should stand up and protect it from the vandals,” she said.

Provincial education spokesperson Loyiso Pulumani said: “We said all the schools that are not ready should not reopen until all the precautionary measures are in place. The lockdown disrupted everything and no construction could take place.

“For now the focus is on reopening the school. The other projects would be considered later,” he said.

Next:  IPID a no-show in Petrus Miggels police assault probe