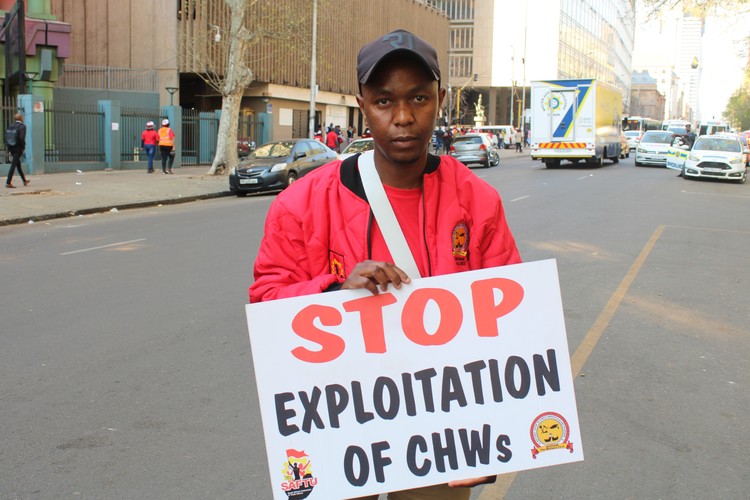 Masibonge Makhanya is a community health worker from KwaMbungulu in KZN. He says he works in a rural community and earns a low salary though his contract is renewed yearly. He wants a housing allowance and medical aid. Photo: Kimberly Mutandiro

Hundreds of members of the National Union of Public Service and Allied Workers (NUPSAW) and other unions marched to the departments of Health and Social Development and the National Treasury in Pretoria on Tuesday.

Among the marchers were community health workers, cleaners, security guards and Expanded Public Works Programme workers who believe they are being exploited.

In lists of demands to the Social Development and Health departments the workers demanded permanent employment and the filling of vacancies. They want the National Treasury to allocate funds for the departments to meet their demands.

NUPSAW president Monwabisi Titus Daniso said the departments took for granted the work done by these workers. “Remuneration negotiations are still in the Bargaining Council, but the issues need to be addressed. If our demands are not met we are going to continue. It’s time workers are taken seriously,” he said.

According to NUPSAW general secretary Solly Malemo, a resolution was signed in 2018 with the understanding that community health workers would be absorbed, but to date this has not happened. They continue to earn a stipend of R3,500, he said.

Lesiba Thobakgale, spokesperson for SAPU, said the demand for an 8% increase as opposed to the 2% being proposed by public service employers would not just benefit workers in the health sector. “With the high cost of food, fuel and rising inflation, what will workers do with 2%?” asked Thobakgale.

After handing over the memorandums to the departments, the workers walked to the Union Buildings where they held a night vigil ahead of the mass stay-away and marches planned for Wednesday.

The departments have seven days to respond to the workers’ demands.

Next:  Court victory for SARS whistleblower