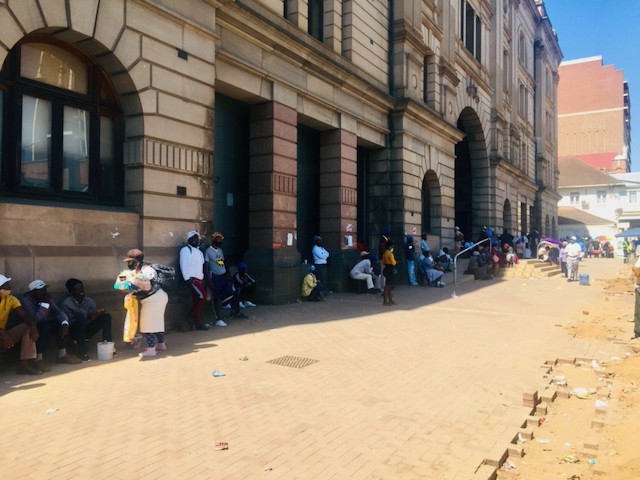 Social grant beneficiaries say it is a struggle to get collect their grants at the main post office in Langalibalele Street, Pietermaritzburg. Photo: Nompendulo Ngubane

Many had been struggling since last week to get their grants at the main post office at Langalibalele Street. They had come from Sweetwaters, Dambuza, Snathing, Edendale and France, only to find long queues hardly moving or to be told that the system was down or offline. Load-shedding has made the situation worse.

Thembelihle Mthiyane, from Bhobhonono, was desperate to collect her two daughters’ child grants. “If it wasn’t for poverty, I would have forgotten about this money,” she said.

“We stand outside for hours. They only inform us about the systems being offline after hours of standing. People have no choice but to wait or go home. There is no communication. After hours of being exposed to hot temperatures they come out and tell us we have to come back the next day,” said Mthiyane.

“We suffer a lot before we get this money. This post office has been problematic for a long time. No one is saying anything. It doesn’t get better,” she said.

Zanele Shandu, from Sweetwaters, was trying again after she was unsuccessful last week, queueing as early as 4am to try and get her grandchild’s grant. “Arriving early doesn’t help. They close the post office at 2pm, if they like,” said Shandu.

“I don’t have money for transport to return tomorrow if I don’t get paid today. I borrowed from my neighbour who owns a tuck shop. We stand in the queue and wait for them to start working. The doors remain closed even after the opening hour, then they come out and say that the systems are offline,” said Shandu.

“Why is it always the poor who have to suffer? Some of us are on medication. We are hungry and tired. The government must intervene,” said Shandu.

Themba Zungu, from Edendale, was in the middle of the queue hoping to get her pension. She remarked that there was no visible security. She said there are people who get paid to hold places in the queue and this sometimes leads to violence and chaos in the queues.

“The post office is aware of this, but they are not helping us. We are scared because these boys carry knives and they threaten us. Our lives are in danger,” said Zungu.

Zungu said the “boys” take deposits of R50 and then get another R100 when the person gets their grant.

Bheka Mncwabe, from Dambuza, who came for his Covid grant, said, “After many failed attempts during the week, I came on Saturday morning. They closed early, before I could get in. It’s Thursday today and I’m still here. I’m not here because I want to but it’s the stomach, it’s empty. I’m already owing money for transport that I borrowed from a friend. I will only be able to buy bread and tomatoes when I get this money.”

Post Office spokesperson Johan Kruger said the system was down for one day this week, but was now operating normally. He said grant payments are not possible during load shedding. He said the sheer volume of transactions across the country does slow the system down.

Kruger said beneficiaries are notified when their grants are available by SASSA via SMS “but many beneficiaries go to the post office every day to check whether the grant is available”.

“We advise customers not to pay for a space in the queue and in fact, to lay a charge of bribery and corruption against the perpetrators,” he said.

He said the Pietermaritzburg branch normally closes at 5pm, or earlier if the cash for the day is exhausted.

“We need to point out that beneficiaries can also withdraw their grant at any Pick n Pay or Boxer supermarket, and this facility will soon be extended to more supermarkets and spaza shop chains,” said Kruger.