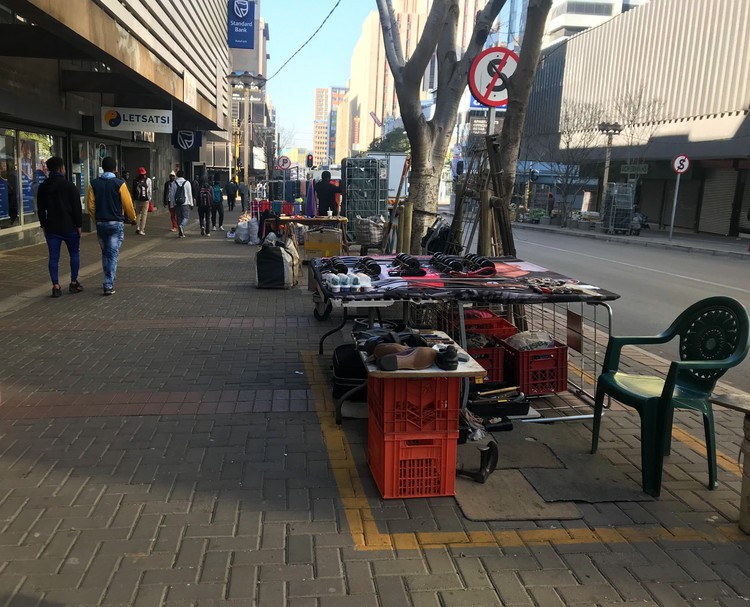 Informal traders in the City of Johannesburg are complaining about the confiscation of their goods by the metro police. They want NEDLAC to include them in government’s economic recovery plan. Photo: Masego Mafata

Informal traders are asking the National Economic Development and Labour Council (NEDLAC) to include them in the country’s post Covid-19 recovery plan.

This is part of a new campaign called “Do No Harm” by the South African Informal Traders Alliance (SAITA), calling for better treatment of informal traders. It is a collaboration with Women in Informal Employment Globalizing and Organising (WIEGO) and Streetnet International.

Top on the campaign’s demands is for a temporary ban on evictions and confiscation of informal traders’ stock and equipment.

It comes on the back of the Johannesburg Metro Police Department (JMPD), this week, confiscating goods from informal traders who allegedly violated City of Johannesburg bylaws.

But the JMPD’s Wayne Minnaar said the recent action was to prevent “severe overcrowding, especially in Johannesburg’s inner city”. Minnaar said the operation was to ensure compliance with the Disaster Management Act, which include regulations about social distancing and limiting the number of people in a space.

“Traders pay between R1,600 and R3,000 to retrieve their goods. Many traders are aware of the bylaws and they know where to trade and where not to trade,” said Minnaar.

SAITA president Rosheda Muller said, “We do agree that there should be regulations but it must include input from informal traders. The government cannot write bylaws that will affect our traders negatively. Nothing about us, without us.”

Muller believes that goods should not be confiscated without officers first engaging with the trader. “Informal traders are there to sustain a livelihood and ensure that there is an income for them and their family to survive on, yet they are often victims of ‘law and order,’” said Muller.

The City’s informal trading by-laws state that officials must issue a detailed receipt for confiscated goods. The by-laws also state that the address where the goods will be stored should be included on the receipt.

Lulama Mali, a trader in Helen Joseph street said, “Sometimes they don’t even itemise the goods, making it difficult to retrieve them. Having our goods taken is so normal now, it’s part of our daily life.” Mali is also a member of the Johannesburg Informal Trader Platform.

Montana Ngwane, who trades on the corners of Rissik and Helen Joseph street, said that when his cellphone accessories were confiscated last year, he had to borrow money from friends to restock. “We couldn’t afford the amount on the receipt they gave us. It was around R3,000. We figured it would be cheaper just to buy new stock because you can spend about R2,000 on that,” he said.

An achar seller in Bree Street, who asked to remain anonymous, said there were not enough demarcated areas to accommodate all informal traders in the inner city. “We know we are not supposed to trade here, but where else must we go?” she asked. “I come here every day knowing I will have to grab my things and run from JMPD. It is a risk I have to take to put food on the table for my children.”

The informal economy has since grown significantly as many people lost their jobs due to Covid-19 and took to trading, said Muller.

“There are more people competing in the informal economy and not enough is being done to develop it. This is why we are calling for more engagement. The government must listen to our grievances as well as consider our solutions in their economic policies,” she said.

Next:  Over 20 learners injured as taxi crashes into barrier at Parliament

Previous:  How hesitant are South Africans about getting vaccinated?