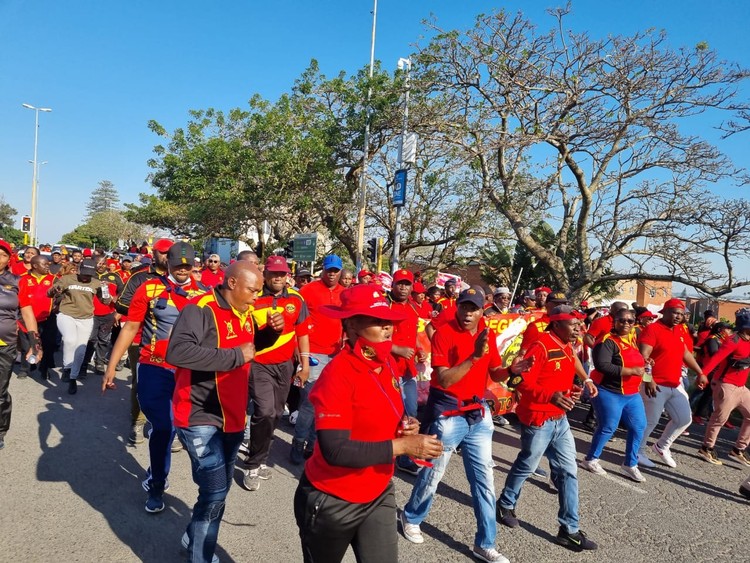 About 400 workers from the Amathole District Municipality marched on the busy Oxford Road to the mayor’s office in East London on Wednesday afternoon. The workers, supported by the South African Municipal Workers’ Union (SAMWU), were protesting against the reappointment of municipal manager Mthandeki Mnyimba.

SAMWU says it has filed a court application to oppose Mnyimba’s appointment for another five years.

This follows a decision made by Amathole’s council two weeks ago. The decision sparked protests and workers downed tools, halting a number of municipal services.The ANC’s Provincial Executive Committee then ordered Amathole to rescind its decision but this never happened. The party has since asked the municipality to explain its decision.

At the offices of Mayor Nceba Ndikinda and the Eastern Cape MEC for Cooperative Governance and Traditional Affairs, Xolile Nqatha, SAMWU president Nelson Mokgotho told Amathole workers that the union would not “leave the Mnyimba matter up to politicians”. He accused Mnyimba of being incapable of running the municipality and victimising workers who speak out against him.

In their memorandum of demands, workers also called for Mayor Ndikinda to step down for his role in overseeing the decision to reappoint Mnyimba.

In a separate memo addressed to COGTA MEC Nqatha, workers demanded an end to victimisation of union members by municipal managers in several Eastern Cape municipalities.

SAMWU provincial secretary Luzuko Yalezo said 16 shop stewards were currently fighting to keep their jobs at Amathole, and another 14 shop stewards at Great Kei Local Municipality had been dismissed. The union is demanding that these workers be reinstated.

MEC Nqatha told marchers that the province is also concerned about the situation at Amathole. “We are taking all steps as COGTA but we are a democratic country that has to follow certain laws,” he said.

Previous:  Bad driving, gang violence and a hostage situation: why there’s no water in Smartie Town