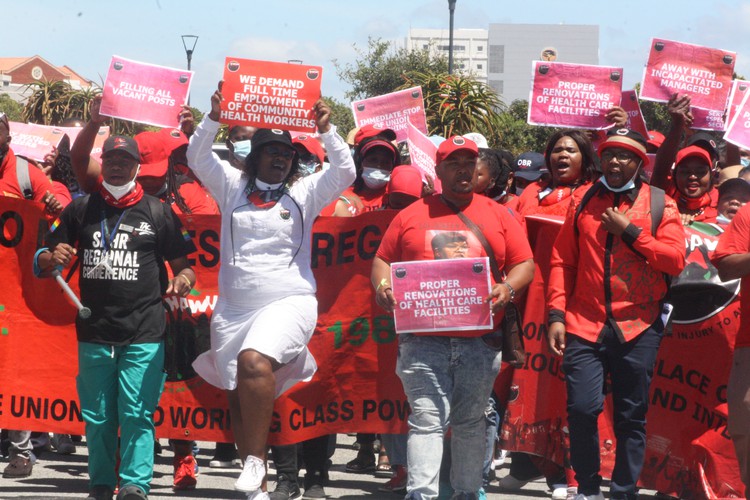 NEHAWU members and supporters clad in red marched through the streets of Gqeberha against the health district’s management on Friday. Photo: Thamsanqa Mbovane

About 100 health workers, including hospital porters, general assistants and nurses marched to the district office of the Department of Health in Gqeberha on Friday.

The group handed over a petition, demanding the removal of health district manager Carlene de Vos, for vacancies to be filled, an end to “nepotism and racism”, and the refurbishment of health facilities across the Sarah Baartman and Nelson Mandela Bay districts, among other things.

The march was led by the National Education, Health and Allied Workers’ Union (NEHAWU) and supported by the Congress of South African Trade Unions (COSATU) and Treatment Action Campaign (TAC).

“De Vos must go. We won’t give the petition to her. We won’t allow our problems to be addressed by the problem,” shouted Busiswa Stokwe, NEHAWU’S deputy secretary in the Eastern Cape. Earlier in the day, NEHAWU members demanded that a senior official from the office of Health MEC Nomakhosazana Meth accept their petition.

Stokwe said union members were alarmed that the Osborne TB Hospital in Kariega was closed without consultation with NEHAWU.

Lindile Cakwebe, a shop steward at Laetitia Bam Day Hospital in KwaNobuhle in Kariega, said the facility was short staffed. “Many people have died in the facility yet the department does not employ new staff. Instead of having four data capturers, we only have one. This puts a strain on other staff members.”

TAC’s provincial deputy chairperson Thembisile Nogampula said, “We are concerned about job losses and agree with the leadership of NEHAWU that there is a lack of consultation by the health district. They are failing us.”

The MEC’s chief of staff, Sbusiso Ngwanya, accepted the petition on the department’s behalf. “Everything raised in the petition will be brought to the attention of the MEC and we will revert back next year,” he said.