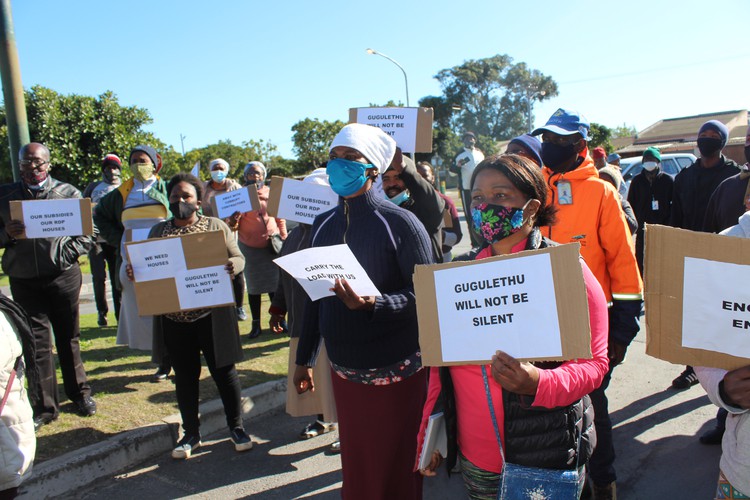 Residents from Gugulethu in Cape Town protesting outside the Fezeka municipality offices on Wednesday to demand answers over the completion of a housing project in the area. Photo:Buziwe Nocuze

More than 50 residents from Gugulethu in Cape Town protested outside the City’s Fezeka municipal offices on Wednesday to demand answers about an incomplete housing project.

According to Luyanda Taki, a community leader, the Erf 8448 housing project has been earmarked for backyarders in Gugulethu. It is also expected to boost local businesses and create employment for residents, he said.

Taki said that there were only five incomplete houses since construction started in March 2019.

“Why is the City taking time to complete the project? We will protest if the City delays responding to any of our demands. The City thinks we are too lazy to protest but those days are over,” said Taki.

The protesters claim they had two meetings with sub-councillors who promised to schedule a meeting with the backyarders and officials from human settlements, but that never happened.

Subcouncil manager Anthony Daniels came out and told the protesters, “As I said at our last meeting, I told the department about your request and I am still in the dark just like you because they haven’t responded.”

Daniels again promised to reach out to officials.

Xolelwa Nyalambisa then shouted, “Those houses belong to us. We shouldn’t be worried about floods when it is winter. If we sit back and wait for the City then we might not get our houses. If that project was being built in another area things would have been quick.”

“We will do what we need to do to get our houses,” she said.

Comment form the City will be added. The department had not respond to questions by the time of publication.

Next:  Watch how Cape Town rain left a neighbourhood under water