As “creative” businesses and high-end apartment blocks pop up in Woodstock, the residents of Pine Road settlement remain in the dark about their futures.

In 2013 Woodstock Ward Councillor, Brett Herron, told Woodstock Life that a project to build social housing units on the site will commence in January 2014. But the residents’ income details were already taken in 2011, and Quinton Moss, a resident who has attempted conversations with the City of Cape Town, said housing has been promised to them since 2006. The 15 families – many have lived on the site for over 20 years – say they feel like they have been forgotten, and are frustrated that the City doesn’t fill them in on details.

Councillor Benedicta van Minnen, the City of Cape Town’s Mayoral Committee Member for Human Settlements, said via email, that her department has completed the planning process for the Pine Road social housing project.

“However, details such as the costs and construction dates, etc., are yet to be finalised and no public participation meeting has taken place as discussions are under way regarding the relocation of the people who are occupying the identified site. Residents from the informal settlement who qualify for social housing will be considered for the project. Those who do not qualify will be relocated to an alternative site, which is still to be determined,” van Minnen said.

She also said that approximately 173 Social Housing Units will be built, and – although this can differ from project to project – minimum social housing rent is usually about R900 and not more than 30% of tenants’ income. To qualify, a household’s income must usually be at least R2,500 and not more than R7,500. Tenants are also responsible for paying electricity, water and maintenance of their units.

However, from a survey conducted with residents, it is clear that the majority of Pine Road residents will not qualify. Out of the 15 households, only about four have a full-time income, and even then, it is often barely over R2,500. The remaining families survive on casual work, SASSA grants and hand-outs. What’s more, according to van Minnen, the values of individual units in these complexes are usually in line with surrounding market prices for similar sized units and the rent increases yearly due to inflation.

Bonginkosi Madikizela, the Provincial Minister of Human Settlements, confirmed that the Pine Road settlement has been informally occupied since the 1990s. When the plot was under the jurisdiction of the former House of Representatives between 1984 and 1994, the house adopted a sympathetic approach towards people informally occupying the site. After being transferred to the National Housing Board, the Western Cape Housing Development, and eventually the Provincial Government of the Western Cape, the land was transferred to the City of Cape Town in 2012.

The residents started off in shacks, but received Wendy houses, two communal taps, and four portable toilets later on. Yet in 2016, residents are still battling with unfit housing as well as fire hazards due to living in wooden houses without electricity and – according to Moss – “rats eating their children”. 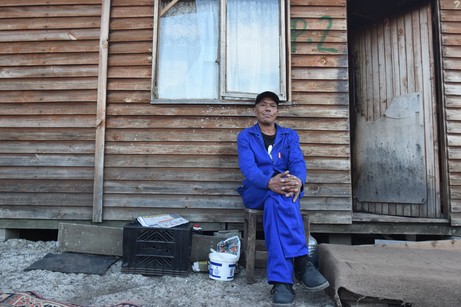 Antony Rose relaxes in front of his home after work. He was one of the first residents to live in the Pine Road settlement. He grew up in an orphanage that was also located on Pine Road.

Although Antony Rose, one of the first residents to live on the site, said that they often witness crime happening on surrounding streets, it is generally committed by outsiders. Moss remembered an incident where he caught a stranger trying to hide stolen goods under his Wendy house, and consequently he had to defend himself in court for supposedly hiding a criminal. He was acquitted. He also mentioned that drug dealers target Pine Road.

NGOs working in the area often focus on advocating for low-cost rental housing to integrate the poor in city living, but Josie Abrahams from the Housing Assembly argues that even low-rent initiatives, such as social housing, are inadequate for the needs of working class people.

A “grey area” under the Group Areas Act before 1994, Woodstock has historically been a diverse suburb home to residents of various ethnicities, classes and backgrounds. But it is in the process of becoming homogeneous, and home only to those who can afford its escalating property values.

Previous:  Joy and agony as students get their matric results