Covid-19: Durban workers without pay as company fails to declare them with UIF

Over R14 billion paid to about 2.5 million workers during lockdown, says labour department 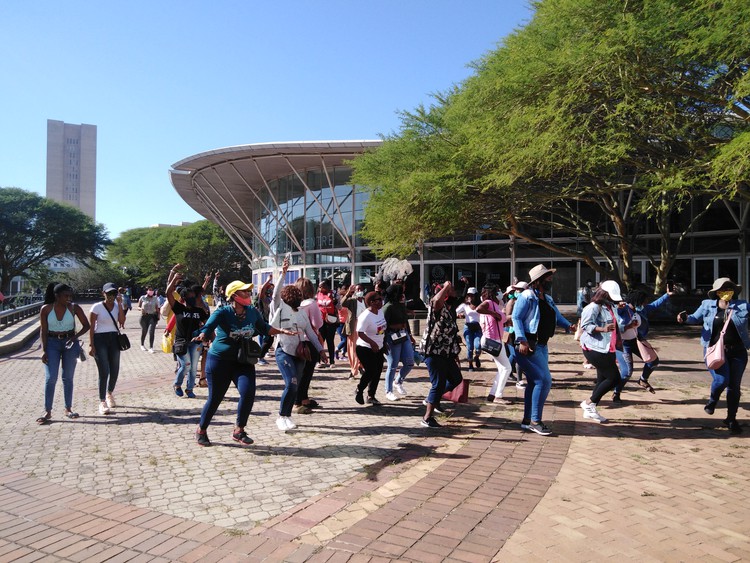 Over 50 employees working as waitresses and barmen at the Inkosi Albert Luthuli International Convention Centre (ICC) in Durban protested at the events facility on Monday. They are demanding that their employer, Fullmark Holdings, pay out money received from the Unemployment Insurance Fund (UIF) benefits for March and April.

But the Department of Labour told GroundUp that the company had not declared some of its workers with the Fund and therefore the Fund could not process their claims.

Fullmark Holdings has a contract with the ICC to offer hotel services for guests for major events and conferences.

An employee who spoke to GroundUp, on condition of anonymity, said that some of their colleagues who work had been paid their UIF. The worker said Fullmark had promised that all workers would be paid soon after the start of the lockdown at the end of March. “We were told that all our shifts have been cancelled and we needed to go back home. We waited patiently hoping that our wages were going to be paid as it was not our decision to stay home but that didn’t happen.”

“Our employer promised that he was going to process the application and asked that we must give him ten days,” said the employee.

He said workers are becoming desperate because they don’t have money to buy groceries. “All we want is that he pays us our UIF so that we can manage to survive under this lockdown,” he said.

GroundUp made several attempts to contact Fullmark Holdings to no avail.

Durban ICC’s marketing and events director, Scott Langley, said: “We also tried contacting the management and owners of Fullmark Holdings so that the employees can get some answers. Unfortunately, there was no response from the company at any of their contact numbers,” said Langley.

“In an effort to assist, we will continue trying to contact Fullmark Holdings so that the matter can be resolved amicably,” said Langley.

Deputy director of communications for the Department of Employment and Labour, Lungelo Mkamba, confirmed to GroundUp that Fullmark Holdings had applied for the Covid-19 Temporary Employee/Employer Relief Scheme (TERS) for 310 of its employees.

Mkamba said that of the 310, only 236 employees were approved and 73 were declined with one pending claim.

“The employer needs to declare the 73 employees to the Fund through our uFiling system before we can process the declined workers. We have paid [Fullmark] just over R1 million to be disbursed to the 236 approved employees,” said Mkamba.

He urged employees to visit the department’s website and use their UIF reference number or ID number to track their payments.

Mkamba said the department had been inundated with UIF requests and applications since the start of the lockdown. As of Monday, relief had been paid to over 2.5 million employees during lockdown and since 16 April, just over R14 billion had been paid.

Next:  Covid-19 Report 4: Massive UK analysis of deaths from virus

Previous:  Patients at Mfuleni Day Hospital get medication through the fence