The Lower Sitholeni community in Ngcobo is frustrated with the Eastern Cape Department of Education as they watch their village school fall apart.

The ceilings in the classrooms are caving in. Windows and doors are broken because of the high winds in the area. Parents fear their children will be injured during classes.

There are not enough classrooms; each one has to accommodate two grades. The school, which has about 220 children, caters up to grade 7. It was built in 2010 with a donation from UBank.

Some learners have to walk more than 10km to the school and there is no scholar transport. (The gravel road into the village is also in disrepair.) Also during the rainy season it is dangerous for learners to cross the river into the village, so residents want a bridge to be built.

The chairman of the School Governing Board, Lulamile Sambatha, said they have been to the provincial education department on several occasions to ask for maintenance and an extension to the school but instead the department attempted to shut it down.

Ward 20 councillor Cebisile Hlazo said a bridge over the river has been approved for this current municipal financial year and a constructor has been appointed. “It is just a matter of time before that work begins,” said Hlazo.

Eastern Cape education spokesperson Malibongwe Mtima said a delegation went to inspect the school in 2016. It discovered that the structure that was donated by the UBank was temporary and poorly built “which is why it is falling apart”.

Mtima confirmed that the education department was in the process of shutting down the school because the attendance numbers were below its policy threshold for viable schools. It said the community was notified, but the move was halted after the community pleaded with the department.

“We have since seen the numbers improving and we have since allocated additional educators but we are concerned that on average learners start schooling at the age of nine,” said Mtima. 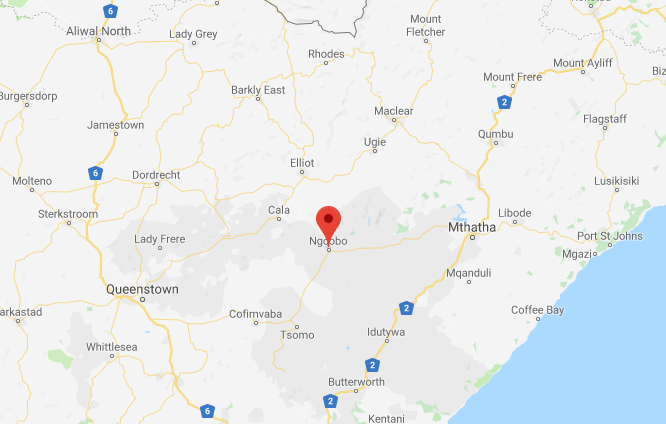 Google Map showing location of Ngcobo in the Eastern Cape.

Call for freeze on land sales in Khayelitsha