Six months after moving in, Nokwayintombi Pateni’s home has still not been electrified 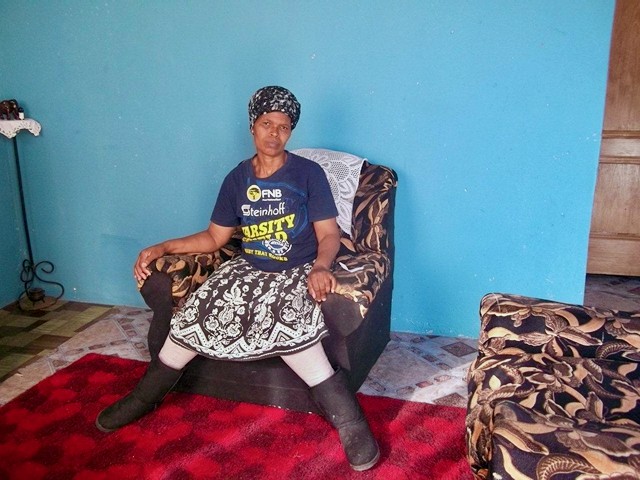 Frustrated, Nokwayintombi Pateni has to buy electricity from her neighbours and use an extension cord. If she had her own electricity she would be benefiting from a free allowance. Photo: Vincent Lali

Nokwayintombi Pateni has spent nearly a decade battling to get her RDP house into a livable condition. She finally moved in her RDP house in Town Two, Khayelitsha, in December 2020. But six months later, she is still struggling to get electricity.

In 2012, Nokwayintombi Pateni was one of about 200 people who dismantled their shacks to make way for their RDP houses. Eskom removed her electricity box when she vacated her plot.

“I had my own box while I stayed in a shack here, but Eskom took it away just before the government built my house,” she says.

Now she has been struggling to get an electricity box installed in her RDP house. “One official said I must give them the meter number if I wanted my electricity box back, but I could not remember the number,” she says.

She was then told she has to pay for a new box, but she can’t afford it, she says.

Eskom said it is a City of Cape town housing project and referred GroundUp back to the City.

Pateni has resorted to paying her neighbour R200 a month to use her electricity.

“If I had my own box, I would get free electricity from government, and I would not have to spend so much money on electricity.”

It is also inconvenient. “When I return from work, I sometimes find that my neighbour’s electricity box has tripped. I’m unable to light [the house] and cook supper when that happens,” says Pateni.

As it is, Pateni and her son had to scrape the money together to finish building her house. She does domestic work in Bellville and her son works as a packer at Boxer in Philippi.

Her house was left without doors, windows, roof, ceilings, plaster or basic amenities such as a plumbing and sanitary ware.

“We had to sacrifice food and other basic necessities and spend our money on building materials to complete the house bit by bit,” she says.

“Sometimes I had to borrow money for transport to work from loan sharks … My brother also intervened and installed the roof, but his budget could not stretch to putting in ceiling. Now the house is cold. I need a ceiling.”

When GroundUp wrote about Pateni in 2019, this was the response we received from Mayco Member for Human Settlements Malusi Booi.

He said a People’s Housing Project (PHP) contractor went into liquidation and left a number of units incomplete.

He said, “The City, together with the Western Cape Government, has started a process to complete all these outstanding units … Government is finalising the funding process for some of the units after which construction will be completed.”

This is the response we received now two years later. “The contractor for a PHP is appointed by the PHP group and not the City. The City did not promise to complete the house.”

“The City, together with the Western Cape Government (WCG), started a process to complete all these outstanding units … [and] is finalising the funding process for some of the units after which construction will be completed.”

“WCG is busy with so called blocked projects where the contractor went into liquidation to get those projects completed. Unfortunately, all the monies were claimed by the contractor.”

Head of communication for the provincial department of human settlements Nathan Adriaanse had not yet commented at the time of publication.

Meanwhile, Pateni continues to battle to raise money for a ceiling, to install a hand wash tap, a basin and bath and hire an electrician to wire the house.

Next:  Desperate Zimbabweans living on the streets of Musina say municipality makes their hard lives worse