The daily struggle of living in a wheelchair in a shack

“The simplest things, like brushing your teeth, require work”

“If you are in a wheelchair and living in a shack, doing the simplest things, like brushing your teeth, requires work,” says 38-year-old Malibongwe Ntanjana.

He lives alone in a two-roomed shack in Gugulethu. He lost his ability to walk two years ago, when he was shot in a car hijacking. He was driving a taxi in Nyanga at the time.

A neighbour, who is jobless, fetches water for him to bathe. Ntanjana pays the neighbour what he can afford from what he earns working part-time at a nearby organisation that offers jobs to people living with disabilities.

He has been living on a “serviced plot” for over ten years. He has a title deed and is waiting for an RDP house to be built on the land. His shack has no electricity. There is a tap at the back, which he struggles to access. He has no toilet; he uses a bucket, which his neighbour empties regularly.

“I have been asking my ward councillor … He has never been here. He has been promising to at least give me a toilet I can use … for the last two years,” says Ntanjana. “When I bath I have to ask someone else [the neighbour] to come and throw away the water and empty the [toilet] bucket.” 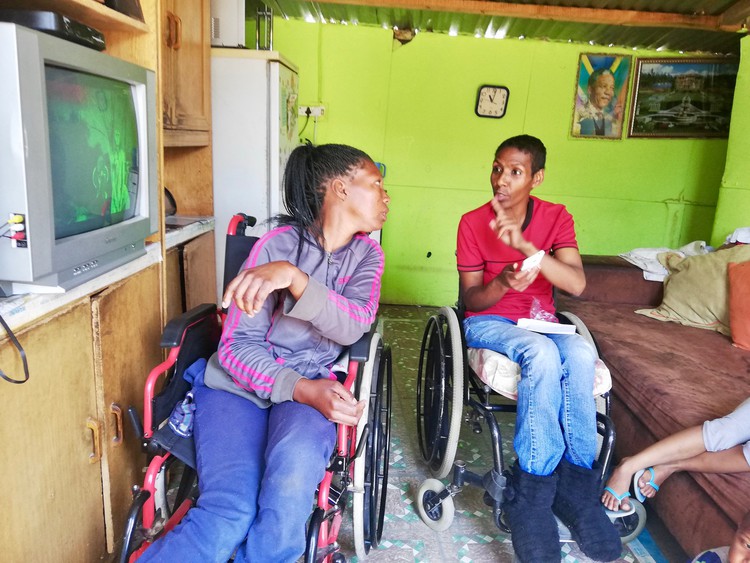 Sylvia Dastile and her friend, Welekazi Dlikidla, have been living in a three-roomed shack on a piece of open land in Nyanga for over ten years. They live with five children; a sixth child is in a foster home and Dlikidla would like her back.

Both Dastile and Dlikidla are in wheelchairs. Dlikidla says she was born with her disability; Dastile was left paralysed by TB of the spine.

“We have to cross the road to access toilets [at an informal settlement] … The toilets are far from us, and when its raining we have no choice but to do everything here at home,” says Dastile.

“Getting into them [toilets] is also a mission, apart from the fact that they are sometimes locked … They are not made for people in wheelchairs. Sometimes they are dirty, but you have no choice,” says Dlikidla.

All around them are formal houses. “We have seen people move into the housing development where we were told our houses are – people in the same conditions as us, but we are not being called. We do not know if we will get houses because that development is almost done,” she says.

“Over and above some of the pilot projects making informal settlement toilets accessible for the disabled, portable flush toilets are provided to those who are willing to make use of them. This type of sanitation is easily accessible to elderly people, children and disabled people, and allows people to avoid the dangers of walking to the toilet, especially at night,” said Tyhalibongo

The toilets are kept in homes and collected by the City, but some people have rejected them saying they are unhygienic.

Next:  Court rules that allocation of police in Western Cape is discriminatory