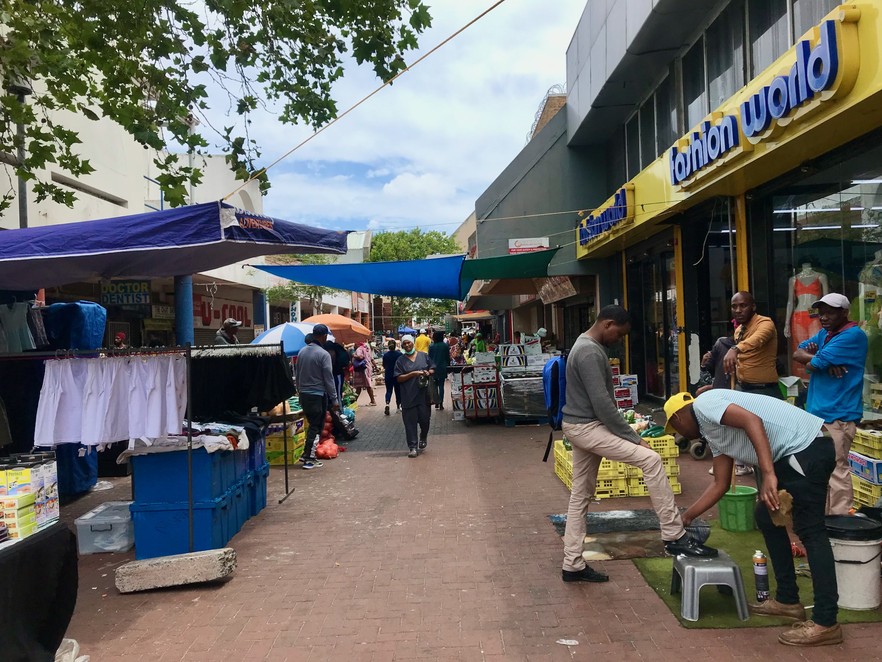 They also complain that they face tough competition from traders without permits who are crowding them out. There is no policing or police visibility, they say.

“Every morning when I come here the place is littered with used condoms, beer cans and empty food containers,” says fishmonger Shireen Christians. She has been selling snoek and hake for 25 years. “For many years we have been asking the City to fence the place,” she said.

“Since the age of 12, I was helping my mother to serve customers here. The profits paid school fees for me and my siblings through matric.” 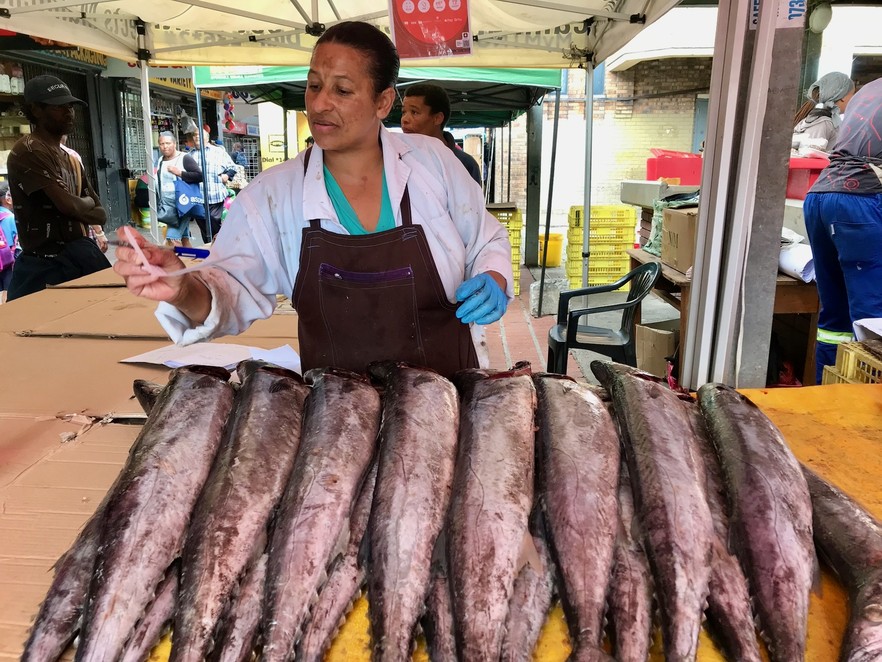 Since the age of 12, when she helped her mother, Shireen Christians has been selling snoek and hake at the Town Centre.

Three years ago, the traders protested outside Lentegeur Civic Centre, demanding that the City of Cape Town deal with unlicensed traders and provide a safe and secure environment.

“Gangsters walk around asking for protection money … If we can get SAPS and City Law Enforcement to operate here, business will pick up again,” says Clinton Andrews, who has three shops in the area.

Andrews said unlicensed traders were selling in front of his shops, blocking the way. 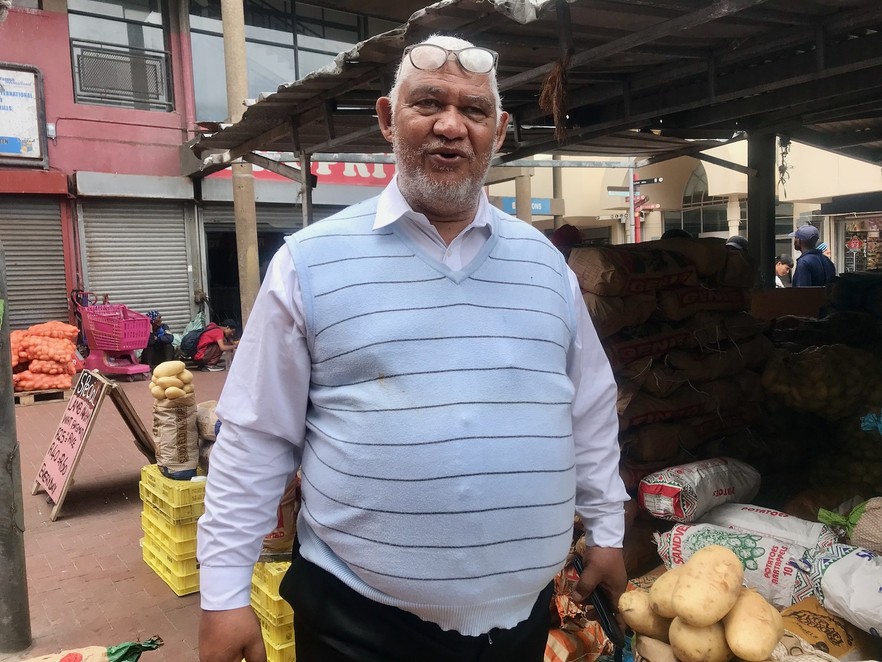 Clinton Andrews sells fish and chips and has three shops in the Town Centre. He says he is fed up with traders without permits selling in front of his shops.

“The law was good back in the day and City’s law enforcement would come twice a day. Now they don’t come at all,” says Elis Peterson who has been trading for over 30 years. She has four stalls for potatoes and she pays R550 a month to the City. Peterson said unlicensed traders were undercutting those who paid for their licences. 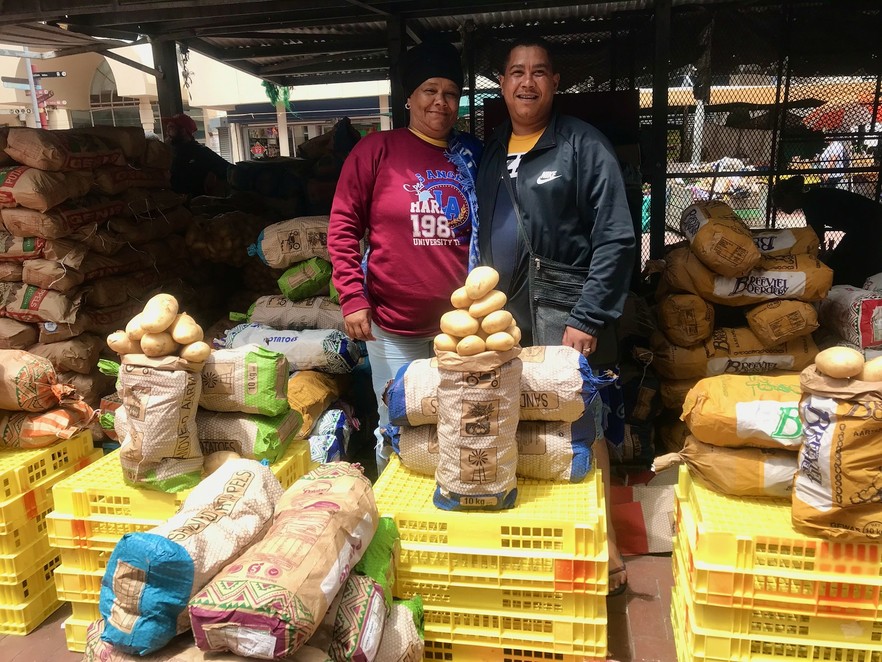 Elis Peterson with her son, Timothy Seconds. She has been trading for over 40 years and has four stalls for potatoes in Town Centre. She complained about the lack of visible policing.

“There is a lot of crime, drug dealing, shoplifting and taxi violence,” she said. “If we can’t trade we can’t feed our children. The City has realised that the informal economy is a big player in an economy and [it] needs to form a partnership with us as they don’t have the capacity to manage alone.”

She said the Forum had met with the City, but progress “has been very slow”.

An unlicensed trader GroundUp spoke to said the process of applying for a permit was slow and difficult. He said he did not want to pay for a licence for the full year because he only made money in December. The trader, who used to work in Parow and Khayelitsha and has been selling in Mitchells Plain for three months, said when law enforcement officers came they imposed a R500 fine, but he had not been fined yet.

City spokesperson for Law Enforcement Wayne Dyason said in the past two months the City had issued 215 fines for various transgressions, including 91 for “illegal trading” in Mitchells Plain.

“Other fines were for open fires in a public place, unpacking of goods in public without written authority, obstructing or interfering with the duties of an officer, accumulation of waste in trading areas, and the use of drugs in a public place, amongst others,” he said.

Mayco Member for Economic Growth James Vos acknowledged that the number of traders without permits has increased over the past two years. “This can be attributed to the impact of Covid on formal businesses,” he said. He said trading was seen “as a last resort” by many people. “The City is doing its best to deal with the impact of these people trading in restricted trading areas.”

He said the City had created overnight storage for fresh produce traders and held monthly meetings with the informal trading steering committee at the Town Centre.

“More will be done by continuing to plan and act jointly with informal traders in dealing with these matters. The Town Centre remains the highest visited shopping centre in Mitchells Plain given its historic and heritage significance. Traders still find the Town Centre the preferred market to sell their goods,” said Vos.

Next:  GroundUp article ignores the rights of content creators