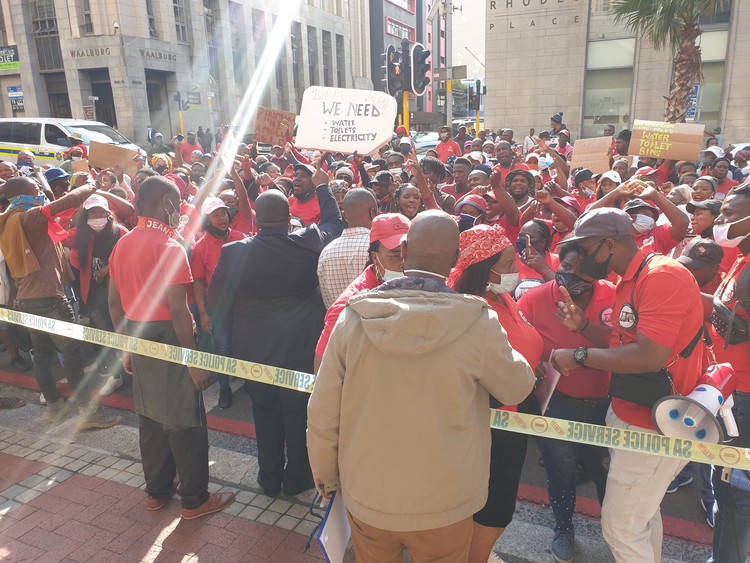 Hundreds of informal settlement residents marched to the provincial legislature in Cape Town on Monday to hand over a memorandum, demanding basic services.

Residents from various informal settlements across the city established in land occupations during the Covid-19 lockdown ,starting in March 2020, have formed the Intlungu Yasematyotyombeni Movement (IYM) (“the plight of shack dwellers”) .

They are demanding water, toilets and electricity.

The march follows a protest in November last year, organised by IYM, where protestors blocked busy Cape Town roads with burning tyres, preventing learners and workers from getting to school and work.

On Monday, organiser Bathandwa Gali said, “That protest was never supposed to be violent, but it was taken over by opportunists. We are not here to fight with anyone. All we want is water, toilets and electricity.

“We want [Western Cape Premier] Alan Winde to come out and address us and clearly tell us what the plan is with providing services to us,” said Gali.

He said elections were around the corner. “How will we go and vote when we can’t even wash ourselves because there’s no water? They need to provide us with services right now before the elections,” he said.

Wearing red T-shirts and waving placards with, “We need water, electricity, toilets, waste bins,” the marchers sang in front of the steps to the provincial legislature, which had been barricaded by police holding shields.

Nomaswazi Mgebisa, a mother of three from Siyahlala informal settlement in Khayelitsha, said, “We have no toilets, no water, no electricity and our rubbish is never collected. We live with old people who are struggling … We use buckets to relieve ourselves or you have to walk a distance to an open piece of land. We use heaters to cook and candles for light.”

Andiswa Charlie, from Phumlani informal settlement near Driftsands, said that because they had no services, they were now also being exploited. “We usually go to nearby houses when we need water or the toilet, but now you are charged. For instance you have to pay R10 to fill up a bucket of water, or R10 to use the toilet. We are unemployed, how can we afford that?” asked Charlie.

When Winde did not come out to address them, the group sat down in the road.

Western Cape government director general Harry Malila came out to accept the memo on Winde’s behalf. But the group refused to give the memo to Malila.

Malila promised that he would bring the memorandum to Winde’s attention, but IYM chairperson Xoliswa Tsholoba said they will “keep coming until Winde takes the memorandum himself”.

Tsholoba told Malila, “We are not going to give it to you, we want the Premier. We will keep coming until he gets tired of us. Tell your law enforcement to stop abusing us. They did not build our shacks; we built our own shacks. They must stop demolishing our houses. It might be shacks to them, but they are houses to us.”

The marchers left the provincial legislature but vowed to return with an even bigger crowd.

Next:  Video: Sleeping rough to get a grant

Previous:  What a waiver on Covid-19 vaccine patents may mean for South Africa