The City of Cape Town says the shacks destroyed last week in the fast-growing Vosho settlement in Enkanini, Khayelitsha, were unoccupied - but the people who were living in them say otherwise.

Human Settlements Mayoral Committee member Councillor Malusi Booi told residents last Wednesday that unfurnished and unoccupied shacks would be destroyed to make way for a housing development. At a meeting in Vosho, he said: “As the Western Cape government, we don’t allow people to occupy land without our permission.”

“I want the Law Enforcement to leave unfurnished and unoccupied shacks lying on the ground. We are trying to develop the area by building houses and roads.”

Shacks built on the hill the shack dwellers jokingly call Plattekloof (an up-market suburb in Bellville) gave him sleepless nights, he said.

Booi said: “If heavy rains pour, all the shacks would tumble down to the bottom of the hill and you would blame the government.”

At the same meeting, councillor Andile Lili (ANC) said the shack dwellers would be moved so the City could build about 2,000 houses over seven years at a cost of about R1.2 billion in Enkanini informal settlement. Vosho is part of Enkanini.

“We can’t allow a budget meant for development to be scrapped just because you have occupied the land,” said Lili. “We can’t afford to disappoint people who are living in squalor and who have been waiting patiently for their houses to be built.”

The City of Cape Town would put the shack dwellers on the housing database, said Booi.

The next day, 35 shacks were destroyed by Law Enforcement officials. 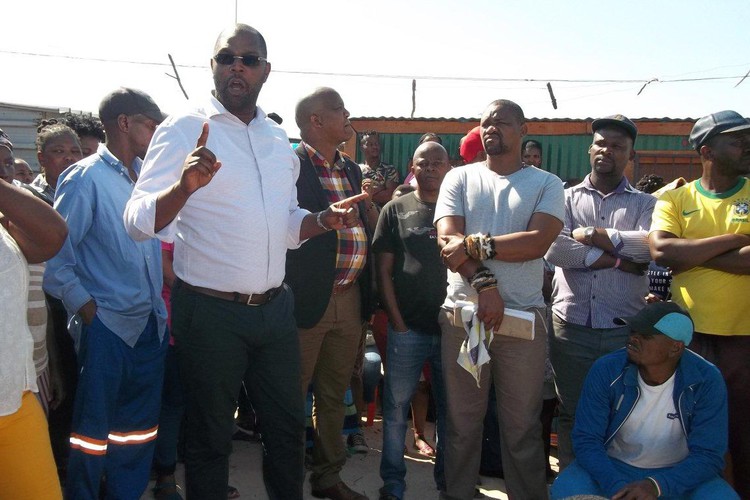 Xolisa Yenzekile, 33, said his shack was complete with windows and a burglar door, and was furnished with a cupboard and a bed. “I have been living in the shack [with my family] since June last year. I’m shocked that they have destroyed it,” he said.

Yenzekile was getting medical attention at Michael Mapongwana Community Clinic when the officials flattened his shack. When GroundUp visited, his building materials were lying on his bed, with his blankets and his other belongings. “I don’t know where I and my family will sleep tonight,” he said.

Yenzekile, who works as a cook at Mugg & Bean in Tygervalley, lives with his girlfriend and his five-year-old twins. His girlfriend works as a street sweeper for an Expanded Public Works Programme project in Enkanini. He previously rented a small room in Enkanini, but moved onto the land to have more space.

Anathi Gobingca, 28, said the officials destroyed her neighbour’s shack while he was at work. “I saw the officials break down his shack with crowbars,” she said.

Inside the shack were an empty beer bottle, a bed, a hammer, a spade and a cupboard. Gobingca said: “My neighbour works as a security guard and is at work now, so he doesn’t know what is happening to his shack.” The guard has a three-month-old baby, she said. 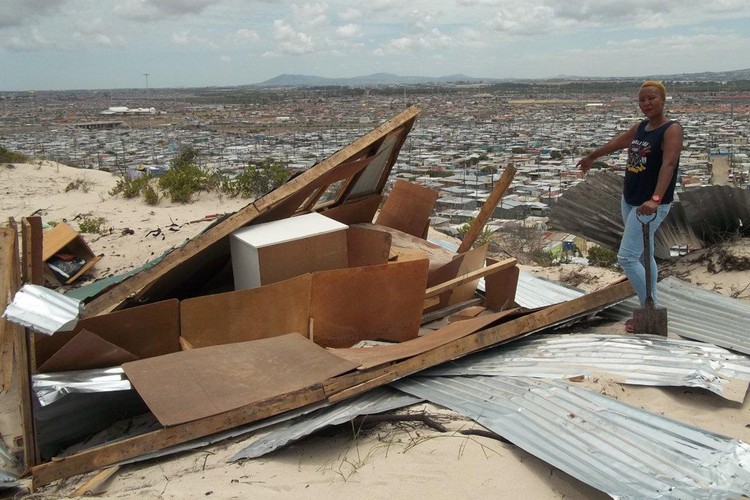 Anathi Gobingca points at the demolished shack of her neighbour who works as a guard.

Nonzukiso Tyhotyholo, 33, cried and begged the officials to leave her unroofed and empty shack standing, but they went ahead and destroyed it.

“Go to the office and explain your story. I’m not in a position to help you,” GroundUp heard one official say, as he led City workers responsible for demolishing the shacks.

Tyhotyholo said she had planned to put a roof on her shack as soon as she had paid for stationery and school uniforms for her children.

Sikelela Chophiso, 32, said the officials had demolished his incomplete shack, which he put up in December. “I needed only two zincs to complete the shack and move in, but I had no money to buy them,” he said. He works in Ottery, earning R2,000 a month.

The Vosho settlement has grown fast since January last year, when about 240 residents moved onto the land, part of which had been used as an illegal rubbish dump by local shopkeepers. The occupiers cleared the land and put up shacks.

The City warned that the occupation was illegal but Law Enforcement officials removed only incomplete and unoccupied shacks.

Finini said the Law Enforcement officials were not destroying complete and occupied shacks at the time. “Residents built up their shacks in the evenings and at night so that the officials could find them complete the following day and not destroy them. Shacks mushroomed rapidly and you would see new shacks every morning,” he said. After September, more families trickled slowly onto the land.

“Even now you still hear the sound of hammers against corrugated iron sheets as some individuals build their shacks. The land occupation never stopped completely,” he said. 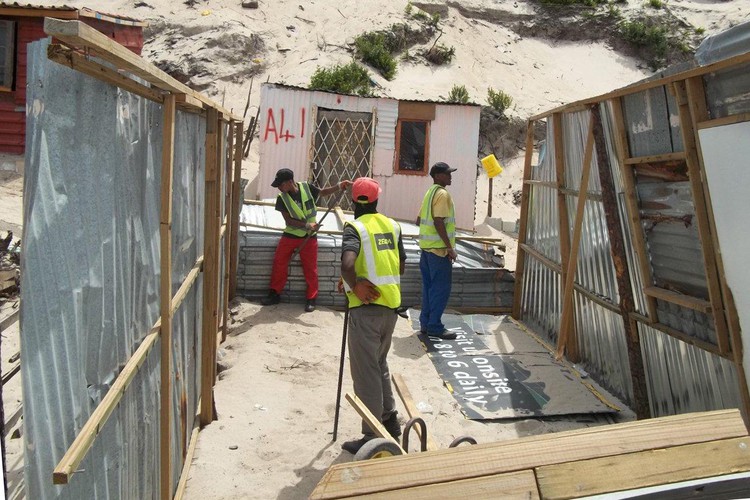 At the moment there are about 600 families in Vosho.

Booi told GroundUp that 35 “illegally built and unoccupied structures” had been demolished in Enkanini on 10 January. “The structures were pointed out to City officials on a walkabout with myself, Councillor Lili and community leaders,” he said.

Booi added: “Community leaders were concerned that the structures would be used for criminal activities.”

“The land in question is earmarked for the development of approximately 2,000 houses. The City has held two community engagement sessions, most recently 13 January 2019, to discuss these plans. By occupying that land, they are blocking this development and also delaying the process for many other residents who have been patiently waiting for houses.” 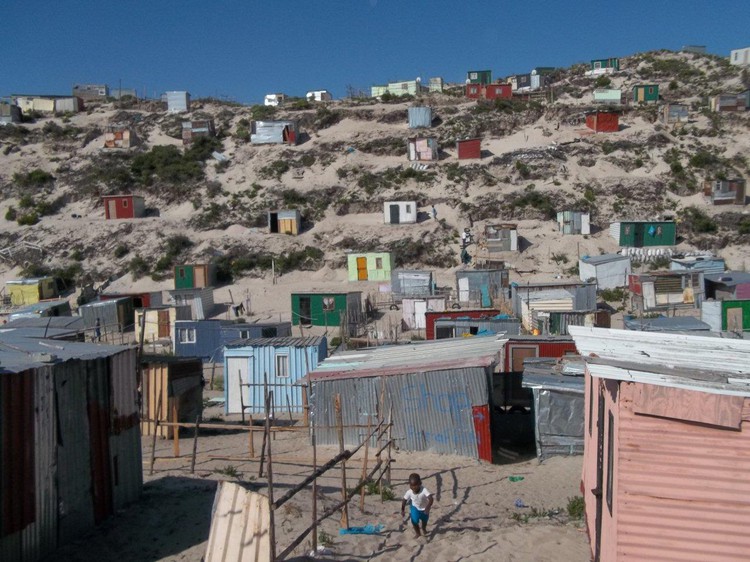