Children left behind by shortage of scholar transport in East London

Department says it will accommodate the learners from April

“I used to wake up at 3:30am and be at the bus stop at 4am so my child can have a place,” says distraught single mother Minathi Tutani. Her daughter in grade 1 missed three weeks at Nowonga Primary in East London because she was not registered on the 2019 scholar transport list.

“I used to wake up and put a marked stone indicating that I am the first person, go back home, and prepare for my child for school,” says Tutani. “But I saw that doesn’t work, because when I go back, just before the taxi arrives, someone else is at the front of the queue.

Every school day, parents go to various pick-up points for scholar transport and wait until their children are in the taxi. They say that if they are not there, their child is sometimes taken out of the taxi by a parent whose child has not been allocated a space.

The problem, parents say, is that for the 2019 year not enough transport has been hired by the Eastern Cape provincial government to take children to school. On one day, GroundUp counted 77 children left behind every day in ward 24 in East London. There were 21 at ePitsini; 32 in Unit P; one in Gwiqi; nine in Khayelitsha and 14 in Kanan.

Mother of two from ePitsini, Sinothando Ntsini, says one of her children, enrolled in 2017, has free transport, but she has to pay for her child enrolled in 2019. She was paying R70 per month. “But this month, the driver approached us and said this amount is not enough,” says Ntsini.

She is unemployed. Her child receives a grant of R410. “From April we will have to pay R350 if we want our kids to get to school,” she says.

Some of the drivers take risks and overload their taxis. Sometimes if a child is absent, another child may ride in their place.

A driver told GroundUp, on condition of anonymity, that he does an extra trip and charges parents R70 a month to go to Nowonga Primary.

“R70 a month is nothing for petrol, but I understand the situation these parents face, and they are not working. But I also cannot take their kids for free,” he said.

Parents have picketed and visited the Department of Education in Mdantsane several times. They were referred to the transport department, which is responsible for allocating transport to qualifying pupils.

Eastern Cape Department of Transport spokesperson Unathi Binqose said, “The department is in the process of including these children for the new financial year plan, which is April 2019. Those who do not have space were not budgeted for but we are going to try to accommodate them in the new budget cycle.” 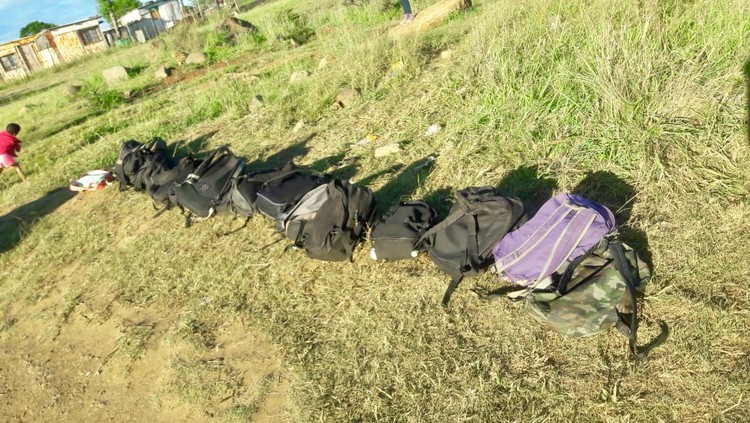 Parents put down school bags to keep their place in the queue for transport while they get their children ready for school at home. Photo: Lisekho Madikane

Next:  Living just metres from a railway line