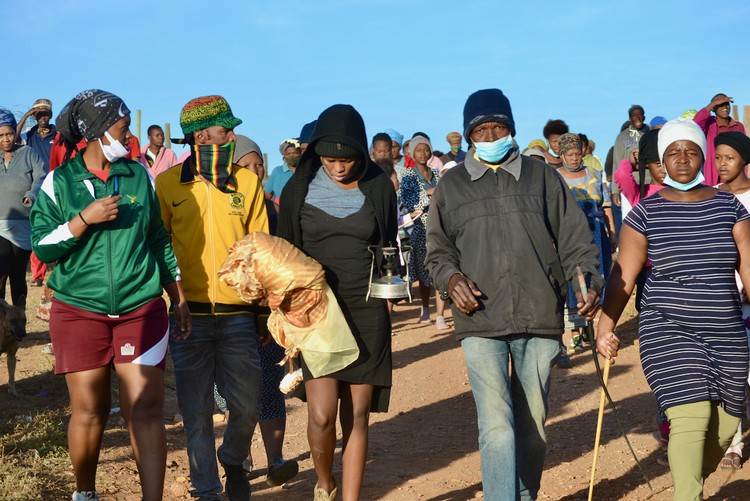 For two hours about 200 people paraded her through the streets of Gunguluza, Uitenhage, on Thursday. She was dressed in a black hood, black dress and a black jersey and flanked by her sister, Nomawethu, her mother, Busisiwe, and her father, Jacobs, carrying whips.

Siphosethu was marched to several homes in search of her parents’ belongings. She was accused of having sold their curtains, a DVD, two prima stoves, her mother’s church shoes, her father’s grinder machine and other items.

“I became suspicious of my last-born daughter, Siphosethu, as she would disappear for a few days, simultaneously with the missing valuable items,” said her father, who was at the head of the search.

He said he kept a big dog in his yard, so he was convinced that no one had entered and the culprit was someone in the household.

“My daughter also sold my curtains, which cost about R800, for R70 to another family of this area,” her mother alleged. “This girl is breaking my heart the way she behaves,” .

When the crowd arrived in Bobani Village, Jacobs knocked at a zinc shack with his whip. “Open the door! I want my prima stove!” he shouted.

A man appeared in the doorway, wide-eyed. He said he had bought the prima stove from Siphosethu for R150. He said she’d told him she’d picked it up from a dump site. He handed the stove back to her, after emptying the paraffin into a bottle.

The crowd moved on to Hotyazana Street in area 10 looking for the grinder Siphosethu said she had sold to a man there, but he was not home.

The crowd then moved on to an RDP house in Champi Street, where they found the mother’s black church shoes. Siphosethu admitted to selling them for R150.

A member of the community shouted that Siphosethu should be stripped naked, but others said, no, only rapists are stripped.

Her father declared that the search would continue on Friday. “I beat her by myself instead of the crowd doing it. I don’t care what anyone says. I still believe it takes a village to raise a child. Thank you for your support, residents.”

Speaking to GroundUp on Tuesday morning in front of her mother, Siphosethu said, “I didn’t feel humiliated at all … It was a good lesson though. My only fear was being beaten by protesters but they took pity on me and let dad do it.”

Her mother, Busisiwe, said: “We did not open any case against my daughter because we found all the loot and she stole from her family.”

“The norm in this area is that if you steal outside your home you get beaten by the mob and stripped naked and then they would call the police and open a case thereafter,” she said.

The police made no arrests, but police spokesperson Captain Gerda Swart condemned the parade and search, saying, “What they did is wrong, and they might be prosecuted.”

Regarding the beating of Siphosethu, Swart said police would act “if she reports the matter and opens a criminal case”.

Next:  “My business will never be the same again” says Duduza spaza shop owner

Previous:  Workers whose employers did not register them for UIF can now apply for funding