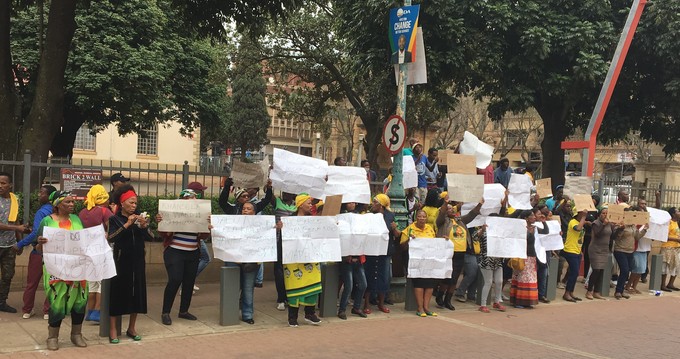 Protesters held placards with the names of ward councillors they want removed at the inauguration of the new councillors at Pietermaritzburg City Hall on Friday.

Most came from Edendale and Sobantu. Some came from Umkhambathini, about ten kilometres from Pietermaritzburg.

Ward 12 councillor Sboniso Majola, ward 11 councillor Sipho Madonda, and ward 35 councillor Sandile Dlamini were some of the names on the placards. Residents shouted their names and sang songs saying they did not want them as councillors. The three were inside the City Hall preparing for the inauguration.

One of the protesters, Thobile Mfeka was dressed in ANC attire from head to toe. She lives in ward 35 in Sobantu. She was shouting Dlamini’s name. Mfeka and other Sobantu residents oppose his election. Mfeka said that her community feels betrayed by the ANC.

“We are not here to fight with them but our presence here is to voice that we are unhappy. We didn’t chose Sandile as our ward councillor. They chose him themselves. The ANC has become a political party that dictates to its members. We want the ANC back to the people. We want them to listen to us, not to do things in their own way. This Zuma legacy must fall, we are tired of this. This is not the ANC that our fallen heroes fought for. They have turned the party into something that doesn’t even have a name. We want our ANC back,” said Mfeka.

Police visibility and security was tight. Residents were warned to disperse but they didn’t. Some in the crowd told the police to shoot them. Others argued about why they were not invited to attend the inauguration.

Ward 11 resident Skhulu Ntombela said he is unhappy about the return of Madonda as ward 11 councillor. Residents of ward 11 protested against Madonda before the election. Ntombela said that despite it appearing that they are being ignored, they will not stop complaining.

“The ANC will not learn, and it’s a pity they are turning a blind eye to such matters. They didn’t do well in the local government elections and this is a wake-up call to them. People are tired and they are pushing us too far now. They brought back all the ward councillors we are not happy about. .. We love the ANC. What we hate is how they have turned the organisation into a business,” said Ntombela angrily.

The ANC secretary in Moses Mabhida Region, Mzi Zuma (no relation to the president as far as we understand), said the organisation is aware that there are people who are unhappy about their elected ward councillors. He said that the ANC when through the councillor selection process properly.

“We will ensure that our ward councillors will work hard in serving the community. Before the inauguration, we called them to a meeting. They are aware that they will be under surveillance in everything they do. They were warned [that they must] communicate with the people about projects or anything that involves community development,” said Zuma.

The newly elected Msunduzi municipality mayor Themba Njilo also warned that he won’t tolerate ward councillors that don’t do their work. He said he would often make visits to each councillor’s ward to check on them. He urged that they become visible in the communities they work for.