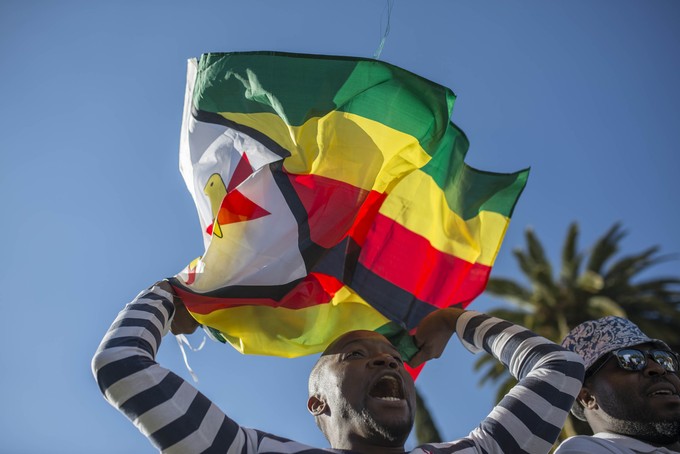 A Zimbabwean man waves his country’s flag in the air after singing the national anthem before the start of the protest march at Burgers Park in Pretoria. Photo: Ihsaan Haffejee

By Tariro Washinyira and Ihsaan Haffejee

On Thursday, hundreds of protesters gathered outside the Zimbabwean Embassy in Pretoria and about 70 Zimbabweans marched from the Grand Parade to the Zimbabwean Consulate in Cape Town to demand that President Robert Mugabe step down.

Laswet Savadye, who was protesting, said: “We will make sure that this whole week we are here [outside the consulate] protesting. They must tell their master [Mugabe] to step down. I am working as an auditor and have a decent life here, but I would love to do the same work in Zimbabwe.”

“We want to go back home and build Zimbabwe, but for that to happen, Mugabe and the system in place should be dismantled,” said Sayade.

He said he is fed up with government corruption, human rights abuses and failed economic policies.

A young woman, who did not want to give her name, said: “Living in Cape Town is painful. I am tired of working as a domestic worker. I want to go back home, but what will I do there? There are no jobs, our health delivery system is down, and nothing is functioning well.”

Calls were also made for the Zimbabwean government to address issues of corruption in government ministries and parastatals, to abandon its plans to use bond notes, and to end human rights abuses and police brutality.

Kayla Phil, 25, joined other South Africans who marched in solidarity. “Just like the way we pushed during fees must fall protests, we can also give the same visibility to the Mugabe must fall protests and bring change if we unite,” she said.

The consulate was shut. Security confirmed that officials were inside. The Zimbabwe consulate did not answer their phones.