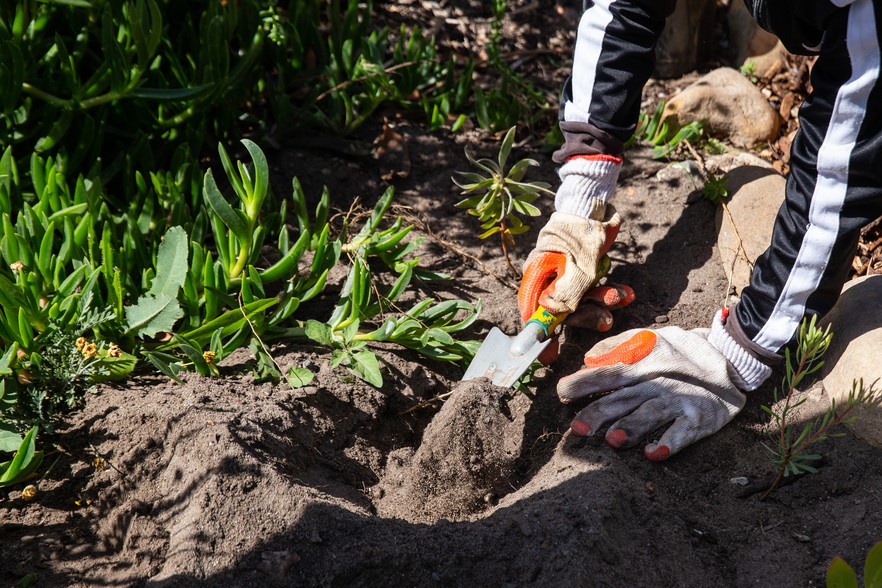 Children from Cypress Primary School plant fynbos as part of the Greenpop’s “Fynbos for the Future” project. Photos: Ashraf Hendricks

On Friday, children from Cypress Primary School in Athlone left their classrooms to plant fynbos in the school garden. This was part of Greenpop’s “Fynbos for the Future” project where schoolchildren help to create green spaces and to build a fynbos corridor, learning about plants and the environment at the same time.

“Trees aren’t really meant to grow on the Cape Flats,” said Deon Louw, manager of Greenpop’s Urban Greening programme. The area is dry and windy in the summer. The soil has few nutrients. “Fynbos is supposed to grow here. It’s what grew here before people were here,” he says. 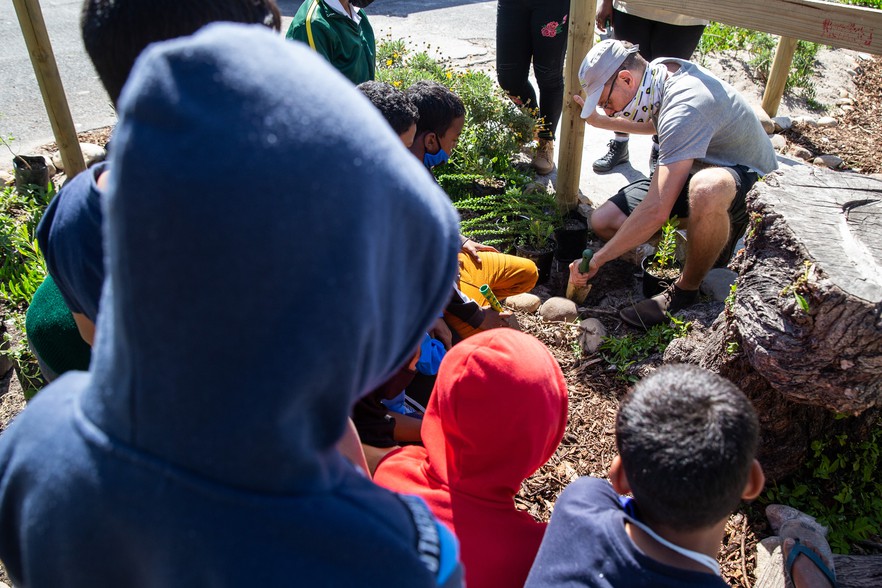 Greenpop’s Fynbos for the Future project started in 2018 and runs at ten schools, mostly on the Cape Flats, in District 6, Woodstock and Philippi. These areas have little greenery, says Louw. “A lot of these children don’t have a garden, so they have no frame of reference when you talk about fynbos and conservation.”

Children who grow up in nature tend to be more physically and mentally healthy, he says.

“Instead of taking them to Kirstenbosch, we are trying our best to bring Kirstenbosch to them,” says Louw.

The children learn to plant, draw pictures of the plants, and create fynbos seed “bombs”, clay rolled into balls into which seeds are inserted. The balls are left to dry and then can be taken home or distributed across the area — even thrown out of a car — and when it rains the seed will germinate.

Greenpop’s project aims to help children connect not only with nature but also with their natural heritage. Greenpop visits each school six times, and once the project is complete, each garden will have about 50 species of plants. 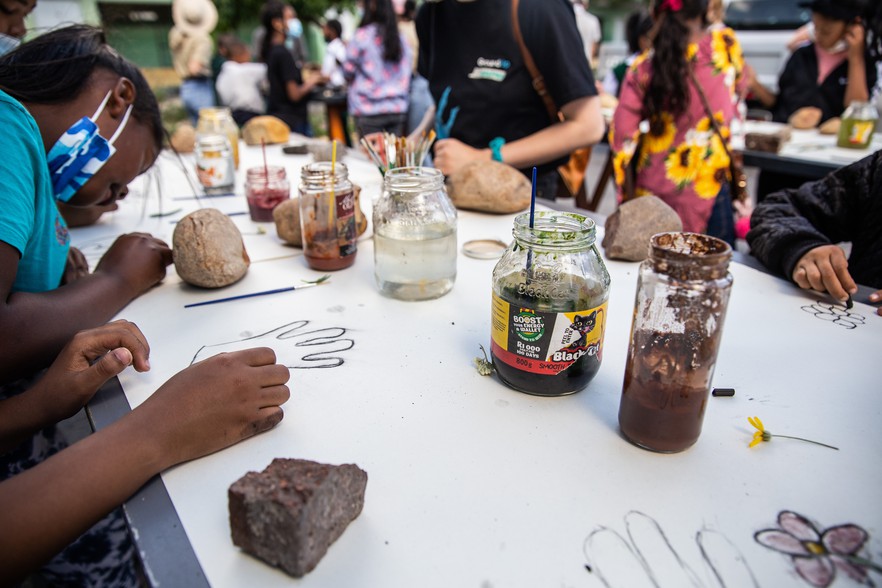 The fynbos biome, or South Africa’s Cape floral kingdom, is one of the most plant-diverse areas in the world. But urban sprawl has pushed the plants aside, says Louw, and the plants are under threat from development, invasive species and agriculture.

“We’re just trying to bring the fynbos back to where it’s supposed to be,” he said. According to the WWF, fynbos makes up 3% of the plant species in the world and 1,700 fynbos species are threatened with extinction. In the Western Cape, 40 types of plants have gone extinct. “If you wipe it out in one region, you’re not going to find it ever again,” says Louw.

The school gardens are part of the fynbos corridor collaboration: a network of indigenous gardens in public and private spaces across the Western Cape. So far 27 gardens are registered, assisted by Greenpop, Communitree and the Ingcungcu Sunbird Restoration. Louw says that these stepping-stone gardens will give organisms a “petrol station” to refuel. 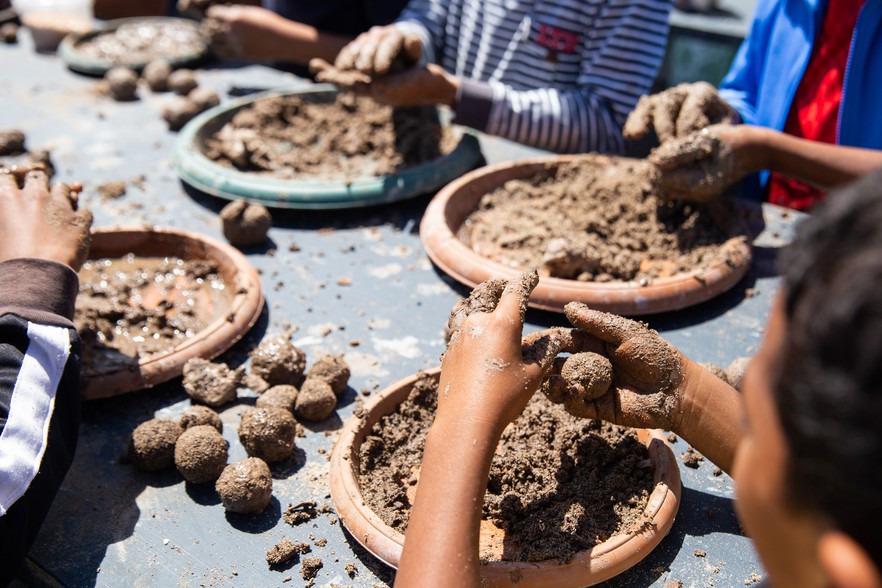 Seed bombs are balls made out of clay, soil and water. Indigenous seeds are put inside and the ball is left in the sun to harden. 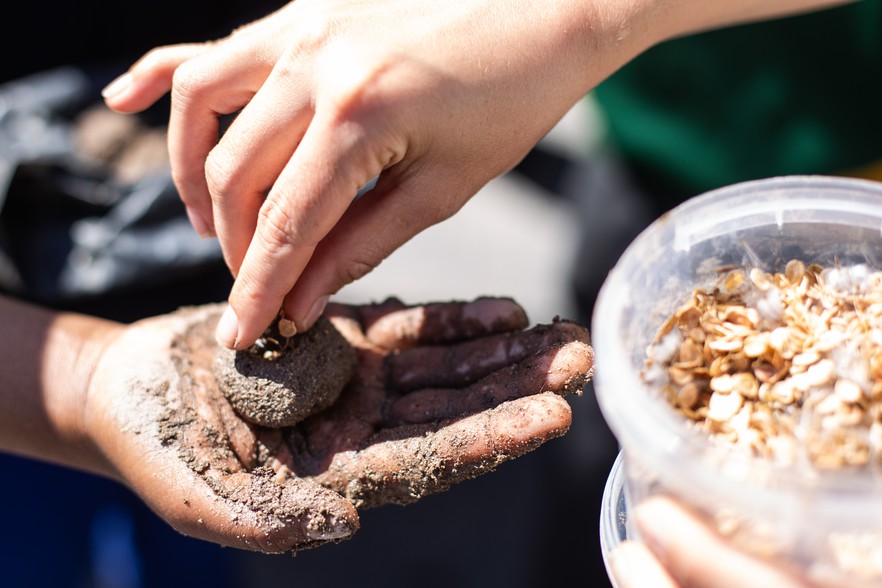 Once hardened, the seed bombs can be taken home or left in a public space where they will germinate when they get wet.

At Cypress Primary School, the children involved with the project are part of the school’s “eco club”, which is a way to get learners more involved in the environment and nature.

When the project started “our learners didn’t really respect the environment much”, says Fatimah Abrahams, a grade 2 teacher and co-ordinator of the eco club at the school. When children are not exposed to nature, “they’re not invested”, she says. But over the three years that the project has been going, things have improved. “There’s less littering now,” says Abrahams.

“Without our plants, we can’t exist,” she says.

“We shouldn’t hurt plants”, a grade 3 pupil said after the workshop. He said that to help the environment “we should plant more plants” and that working with plants made him feel “comfortable”. Another grade 3 learner said that nature “is really beautiful” and he wished he could spend more time in it.