Conditions are dreadful at Pietermaritzburg morgue 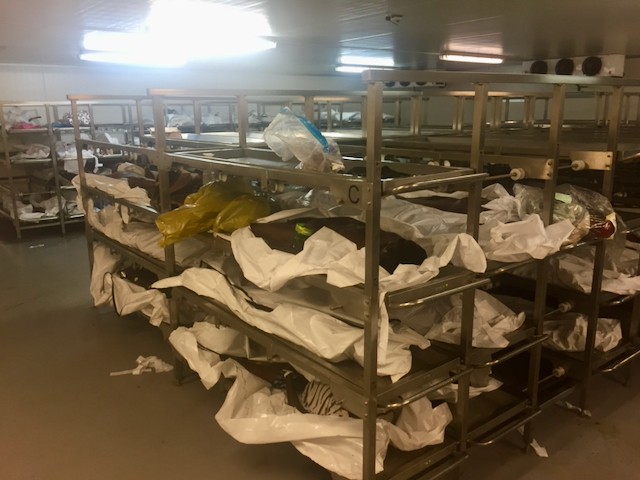 Since 2018, staff have been appealing to the KwaZulu-Natal Department of Health to fix the dreadful conditions at the Fort Napier mortuary in Pietermaritzburg. Photo: Nompendulo Ngubane

Since 2018, staff have been appealing to the KwaZulu-Natal Department of Health to fix the dreadful conditions at the Fort Napier Legal Medico Mortuary in Pietermaritzburg.

Unidentified bodies lie decaying in the mortuary for years. Unclaimed bodies can be seen wrapped in white plastic bags. Only ten bodies were collected by a local funeral company in November 2020. The whole facility has an unbearable stench. Staff say they struggle to get decent Personal Protective Equipment (PPE). There is no hot water to clean utensils and no detergent. Staff bring their own soap. The garbage has not been collected this year.

The mortuary still has only two cars that are operational. The X-ray machine broke last year and is still not fixed. The photocopier and the kitchen equipment are broken. GroundUp saw a leaking pipe at the entrance and in the autopsy room.

“We have reported the matters to the management. As usual they don’t do anything,” said a staff member.

According to the department it has put out a tender and appointed a service provider to refurbish the facility. Two vehicles are in the process of being repaired and more vehicles have been ordered and will be added to the current fleet. Repairs to the X-ray machine are at an advanced stage.

In an unsigned statement it said: “The Department has concluded all post-mortem examination investigations, and is awaiting the allocation of burial space by the relevant municipal authority so that such bodies may be interred.”