Imbizo yields no information on murder of activist 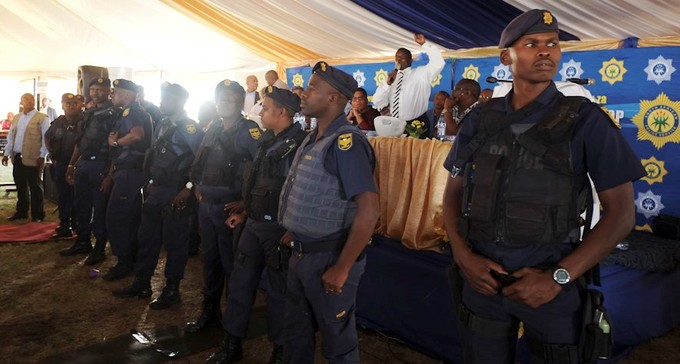 Government ministers at a packed meeting in Xolobeni yesterday ducked questions on the controversial titanium mining project and on the violence which has wracked the Eastern Cape village for years.

Residents had hoped for information on police investigations into the killing in March of activist Sikhosiphi “Bazooka” Rhadebe. But Deputy Police Minister Maggie Sotyu, who addressed the meeting alongside Deputy Minister of Mineral Resources Godfrey Oliphant, did not mention Rhadebe’s death.

A vocal opponent of a titanium mining project in the area, Rhadebe was murdered in March. He was the chair of the Amadiba Crisis Committee, which has been coordinating opposition to the mineral sands mine proposed by Australian company Mineral Commodities (MRC) and its South African partners.

No arrests have been made.

MRC has since decided to pull out of the project. Citing “ongoing violence and threats to the peace and harmony” of the community, MRC announced on Monday that it would sell its 56% interest in Transworld Energy and Resources — which owns the Xolobeni project — to its black empowerment partner Keysha Investments.

Yesterday’s meeting in Xolobeni was attended by more than 1,000 people, split into camps. On Sotyu’s right were those in favour of mining, dressed in suits and ties, generally quiet except when clapping. In the middle of the tent was a mixed crowd, with VIPs in front. On Sotyu’s left were those opposed to mining, with many black Amadiba Crisis Committee T-shirts visible on people of all ages. Generally more vocal, they interrupted the imbizo several times in protest, singing and dancing, and waving plastic chairs in the air.

Sotyu had come to address issues of violence in the area and to respond to accusations by the Crisis Committee of police bias in favour of mining. The Committee has complained of random searches by plainclothes police, lack of prosecution of crimes committed by activists in favour of mining, and a lack of will to stem the violence which has wracked the community for years.

Sotyu’s message was that the community had to come together and heal the existing rifts. She said she hoped the imbizo could be the start of such a process.

Members of the audience were allowed to ask ten questions which were collected and answered at the end of the event. Sotyu refused to answer questions about missing case files or police bias without an active case number, referring questioners to a nearby Department of Justice booth.

Nonhle Mbuthuma, secretary of the Amadiba Crisis Committee, later said the deputy minister had not addressed the purpose of the imbizo. “She repeated that the government has full confidence in the police six times. The issue before her was that the community has lost its confidence in local SAPS.”

Addressing Oliphant, Mbuthuma told Rhadebe’s story. She said he had known that his life was in danger. “People keep on dying. How many is too many? How many have to die before you stop the mining?”

Partly in response, Oliphant warned the crowd not to try to pressure the government for or against mining. He told the audience in general and members of the Amadiba Crisis Committee in particular that the titanium in question did not belong to them, but to the people of South Africa.

“Don’t appropriate power to yourselves,” he said, adding that the government could be trusted to make responsible decisions on mining. He said the government, not the community, would decide on the mine.

“The peace that we want in Xolobeni is the peace that Mandela died for,” he told the crowd. “The leaders must come together and speak with one voice … Mining can happen peacefully if we work together.”

Oliphant attacked lawyer Richard Spoor who represents the anti-mining activists. Members of the Committee answered with shouts and singing, waving plastic chairs, eventually forcing the imbizo to close. The VIPs filed out of the tent behind heavily armoured riot police. They would not stop to answer questions and no police spokesperson could be found.

What the event lacked in answers, it made up for in services. Both Deputy Ministers’ speeches were preceded by praise singers and punctuated by dancing groups. Outside the tent was a mobile clinic. Inside another tent was a police recruiting station and free condoms, as well as a Home Affairs station – “a first for this area” according to a local teacher.