Workers at Walter Sisulu University demand to be insourced 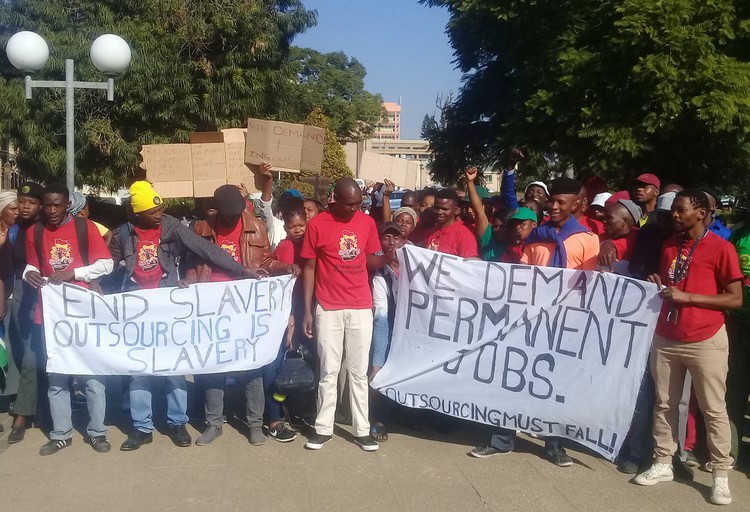 Outsourced cleaners and security guards at Walter Sisulu University in Mthatha on Wednesday demanded that they be insourced.

About 300 workers, including some student supporters, marched from Walter Sisulu University to the King Sabata Dalindyebo Municipality offices in the city centre. A petition was accepted by Mayoral Committee Member Lindelwa Ntlonze on behalf of the mayor.

Academic and Professional Staff Association National Organiser Vusi Mahlangu said they were marching to get to the mayor to intervene. “We have exhausted all internal processes,” he said. “There is stubbornness from the side of the university.” He said he wanted the mayor to “help us get into negotiations with the vice-chancellor”.

He said Walter Sisulu was the only university in the province that had showed no commitment to absorbing outsourced workers.

Outsourced cleaner Nosisa Boli said, “We are unfairly treated by the companies we work under. After we engaged in a similar protest action last year, all 90 of us received letters of dismissal and we were speedily replaced.”

Boli said, “We want to be absorbed by the university because the companies we work for pay us peanuts compared to what the institution pays them as a service provider.”

Sandile Jara, a security guard, said he was failing to provide for his six children after he was dismissed in February with hundreds of others employed by a security company that the university uses.

Attempts to get comment from the university were unsuccessful.