Department given 14 days to respond to grievances 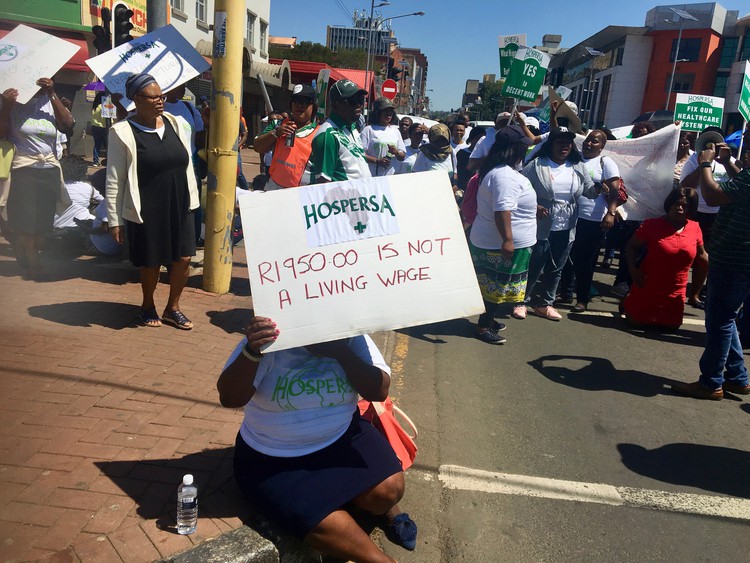 Members of HOPERSA (Health and Other Services Personnel of South Africa) have threatened a total shutdown of public health services if their demands are no met by the KwaZul-Natal Department of Health within 14 days. Photo: Nompendulo Ngubane

Members of HOPERSA (Health and Other Services Personnel of South Africa) have threatened a total shutdown of public health services if their demands are no met by the KwaZul-Natal Department of Health within 14 days.

KZN community care givers (CCGs), data captures and nurses marched to the office of the Premier in Pietermaritzburg on Friday.

Provincial Secretary for HOPERSA Popson Kunene said a resolution with the employer was signed at a national level for the employees to get back pay from 1 July. “That has not happened,” said Kunene.

“The employees have not been paid. With the CCGs they are earning peanuts. They are currently being paid R1,950. The department is now singing a different tune. They say they were not aware of the agreement … The agreement was that they must implement the R3,500 for the CCG’s. There is a letter that is dated 1 July.”

Snenhlanhla Ndlovu from Mpumuza was among hundreds of HOPERSA members who were marching. Ndlovu said the KZN MEC for Health Sibongiseni Dhlomo should give them their money or “go away”. “He is not paying attention to any of our demands. His department is on its knees. There is shortage of staff. Problems keep on piling up. We are failing to survive. Our children are suffering,” said Ndlovu.

During the march, protesters shouted, “Away with Dhlomo, away!”

A memorandum of demands was accepted by the Chief of Staff in the Office of the Premier, Samuel Khuzwayo. “We are aware that you are expecting the response within 14 days. The memorandum will travel to all the right channels for feedback. We will get back to you within 14 days,” said Khuzwayo.