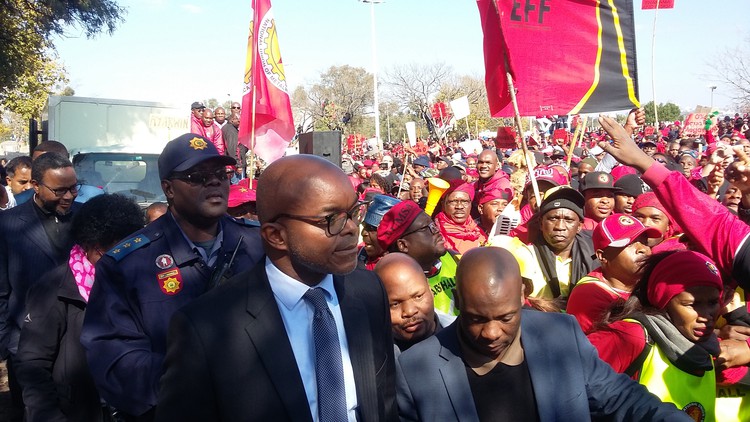 Over 3,000 workers were bussed in from Mpumalanga, North West, Limpopo and around Gauteng. Hundreds of workers took leave to attend the protest, but some from closer to home downed tools for part of the day.

“The power stations are in trouble,” NUM’s Chief Negotiator Paris Mashego told the crowd. “Many units are off as we speak. We are told that even Megawatt Park doesn’t have electricity.”

The demonstrators expressed their anger at the power utility’s 0% wage offer and insisted that they should not take the fall for the maladministration of senior management. Plastic bottles and expletives rained down on Eskom’s new CEO Phakamani Hadebe after he collected a memorandum of demands from union leaders. Hadebe was brought in earlier this year to help turn the power utility around.

Commenting on these events, NUM Deputy General Secretary, Makgabo William Mapaba, said that Eskom had “underestimated and undermined” workers. “The anger demonstrated today is something that everyone can see. 0% is equal to roughly minus 5% of a worker’s salary due to inflation”.

Jabulani Sokela, a NUMSA shop steward from Sedibeng, called the offer an “insult”. “Most of us here pay what is called black tax”, he said. “With everything going up, that black tax will go up. Some of us support very large families.”

A 47-year-old grandmother and NUM member from Soweto, who works for an Eskom contact centre in Braamfontein, said that for her “it’s not just about money; it’s a moral issue”. She chose to remain anonymous after admitting that she often has to tell customers that she cannot deploy technicians to their areas because Eskom is cash-strapped.

She hopes that the protest will be seen as part of “the fight against Eskom which looted the country and deprived millions of South Africans of their right to access free electricity, and even to electricity that they pay for”.

On Wednesday, Hadebe defended the power utility’s refusal to increase wages for 2018, calling it a “tough and courageous” decision that was necessary for the organisation’s “turnaround phase”. He noted that senior management had also sacrificed and would not get increases or bonuses this year.

NUMSA spokesperson Phakamile Hlubi-Majola insisted that a real sacrifice would be to “slash the number of 500 top executives to 80, as it was in 2001”.

She also identified two other areas where the power utility should look to save and recover costs: “Firstly, not one rand has yet been recovered from the looting and mismanagement, such as the McKinsey scandal. Secondly, they could also save money by cancelling the Independent Power Producers project. It’s an extremely expensive renewable energy programme that is owned by international capital and will do nothing for workers and communities.”

By Wednesday afternoon NUMSA, NUM and Solidarity had all lodged disputes at the Commission for Conciliation, Mediation and Arbitration (CCMA).

The National Spokesperson of NUM, Livhuwani Mammburu, warned that although Thursday’s action outside Megawatt Park was only a picket, a strike was still on the cards should the matter not be resolved.

“We will give negotiations at the CCMA a chance. We will try to speak with other stakeholders like the Eskom board, the Minister of Energy [Jeff Radebe] and the President [Cyril Ramaphosa]. If they don’t come up with a solution we will go on a total shutdown.”

Mammburu believes that Eskom will move from its stance of 0% under the orders of the Minister of Public Enterprises Pravin Gordhan, whom NUM met on Thursday. But he also indicated that there could be far reaching political implications should the wage dispute not be resolved.

“Our members communicated that they don’t care that Cyril [Ramaphosa] was a founding member of the NUM. If Eskom stick to their stubborn attitude of 0%, that will affect our relationship with the President.”