SATAWU demands an end to outsourcing 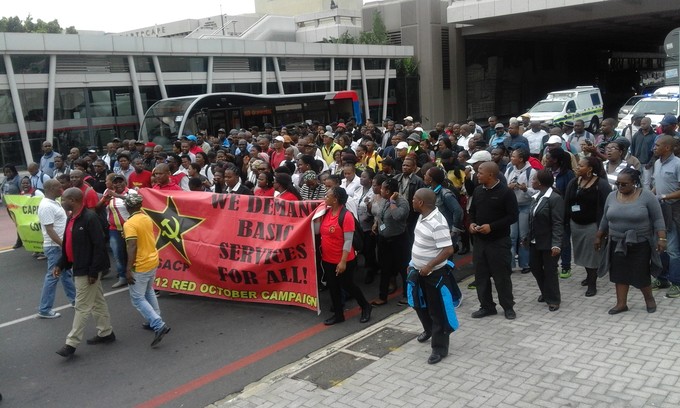 “This is the first day of a battle that could even end in industrial action. We will stop all Prasa operations should our demands not be met,” said Luntu Sokutu.

Sokuta said the workers wanted Prasa to put an end to outsourcing. “Some workers have no job security,” said Sokutu.

“There are people here who have been on contracts for more than three years and they do not get employed permanently, as if they are not rendering a service that is needed,” he said.

The union estimated that of approximately 2,000 Prasa employees, about 1,200 were either worksing in companies providing services to Prasa or working on contract with no job security.

“We have a problem with poor management in Prasa, especially at the regional level,” he said.

An employee who did not want to be identified says he has been on three-month contracts since he started working for Prasa/Metrorail in 2012.

“I wake up every morning to provide security to their commuters, but my job has no security. We have been waiting for too long because every time we want to do something they threaten us about losing our jobs. They know how much we need these jobs. If we do the same work as other people why are we not paid the same? We do not even get benefits,” he said.

Patricia Mbenge and Lucia Nqwayibani lost their jobs when a new company took over the cleaning tender in October.

Mbenge, who had been working as a cleaner for 18 years at Metrorail, says they came to work but were told without warning that there was no longer work for them.

“They did not give us warning. We had already bought our monthly [bus] tickets and everything, but they did not care.

“I have three kids. I am a single mother. Two of my kids are in university because I want them to get the education I did not get. If it was not for NSFAS (National Student Financial Aid Scheme) they would be sitting at home,” she said.

Mbenge is still unemployed and says her sister supports them. At the time she was fired, she earned R3,500 per month.

Nqwayibani had been working at Metrorail for 14 years when she lost her job.

“I just want a job. I have four children and my husband is currently unemployed. The money was never enough, but I could still feed my children. Now, I can’t. Only two of them get grants and I still have to pay rent. I have been looking for a job and still have not found anything,” she said.

Tony Ehrenreich, Western Cape Provincial Secretary of COSATU, spoke in support of the workers outside the Prasa offices.

“We must make sure that we continue to fight against all these companies that continue to outsource our members … The law says equal pay for equal work.

“We can’t have workers who are not permanent. All of us need to earn decent salaries.”

After a long wait for Prasa officials, Regional Rail Planner Lwazi Nobaza came to accept the memorandum on behalf of Prasa.

Prasa has been given seven days to reply to the demands of the workers.

In a statement, Walker said Metrorail had not been asked to release employees for the march, and that no employees had been given permission to march.

“It is therefore the organisation’s view that the action taken by the employees is unlawful”, he said.