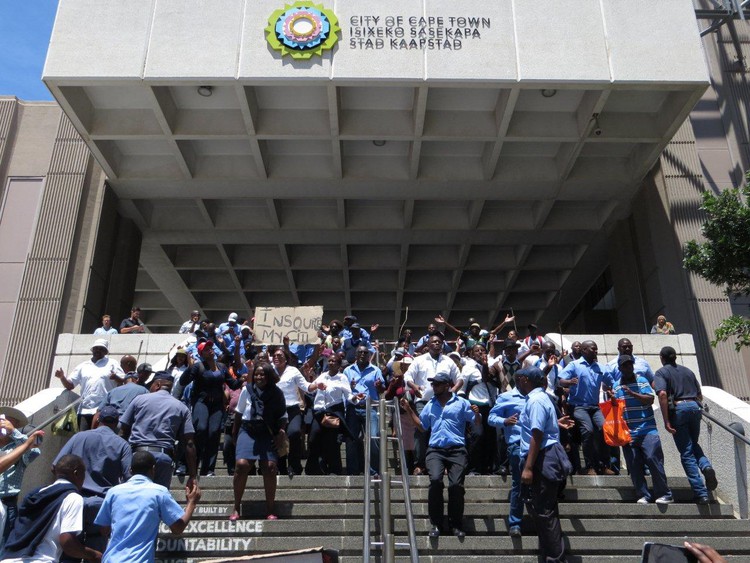 Workers of the Expanded Public Works Programme marched to the Cape Town Civic Centre to hand over a memorandum calling for a review of employment practice. Photo: Vincent Lali

Dozens of City of Cape Town employees marched to the Civic Centre in Cape Town on Friday to demand permanent employment and the right to join unions.

“EPWP employees work on a temporary basis and get R80 per day without benefits. Other City workers who do the same job as them get R350 and benefits,” said Nyovu (GroundUp has been unable to verify this claim). He also claimed that EPWP workers sometimes don’t get issued with safety gear such as face masks, gloves and overalls.

The EPWP is an initiative of the Western Cape Government and the National Department of Public Works that provides temporary work opportunities to unemployed and unskilled individuals.

“The City must hire on a permanent basis temporary employees such traffic officers, law enforcement officers [and] fire fighters who work for municipalities,” said the memorandum.

It also demanded that the City allow EPWP staff to join trade unions of their choice and that workers be hired long enough for them to acquire skills which they can use in future jobs.

Mayco Member for Transport and Urban Development, Felicity Purchase, received the memorandum. “I will hand the demands to the Mayor and he will investigate them,” she said.

Leaders from various organisation also took part in the march and conveyed messages of support to the protesters. “We stand behind you. We are going to fight EPWP … We will win. We will not give up,” said Gary Kannemeyer, interim chairperson of the Municipal and Allied Trade Union of South Africa (MATUSA). He urged the workers to continue with the strike even though it affected their livelihood and families.

In October, MATUSA joined the unprotected MyCiTi bus strikers in a show of solidarity.

The memorandum said that should “an amicable solution” not be reached the workers would march again.