COSATU calls for VAT increase to be scrapped

Treasury says it is reviewing list of zero-rated items 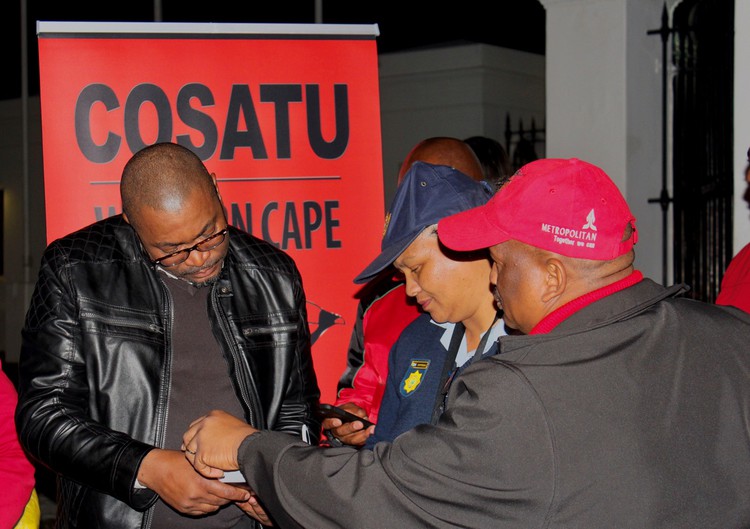 Motlatsi Tsubane and Malverne de Bruyn of COSATU hand over a memorandum to Captain Rachel Chippendale of SAPS at Parliament on Monday night. Workers gathered to protest against the VAT hike. Photo: Aidan Jones

About 50 workers affiliated to COSATU (the Congress of South African Trade Unions) gathered outside the gates of Parliament on Monday night to call for the increase in VAT to be scrapped. VAT was raised from 14% to 15% on 1 April.

The workers also demanded that the list of VAT-exempt products be expanded to include chicken, medicines and essential toiletries and that other forms of tax be considered.

“There is scope for increasing taxes on the rich, such as inheritance, estate and income and luxury VAT taxes,” said Matthew Parks, COSATU’s parliamentary coordinator. “Government needs to manage its R1.4 trillion budget properly before increasing taxes and further squeezing the poor,” said Parks.

In its memorandum COSATU members urged government “to consider additional ways to make up the budget shortfall”.

“Going into a shop with a R500, you get hardly anything for that money because you must think about VAT. It’s a major problem for us,” said Bonnie Fourie, a machinist at a clothing factory in Epping and a member of the South African Clothing and Textile Workers Union (SACTWU).

Fourie said her take-home weekly wage is “about R900”. She said she is the only person working in her household of three. She supports her unemployed son and her elderly father who is on a government pension. Fourie said she pays R120 a week for transport between Manenberg and Epping for work.

“We are talking about the ordinary person in the street,” said Motlatsi Tsubane, provincial chairperson of COSATU. “We call on the president to take decisive steps to reduce the VAT and to direct the City of Cape Town to reduce the water price as well as Eskom to reduce electricity prices for domestic consumption in poorer households.”

National Treasury told GroundUp that the Minister of Finance has appointed an independent panel of experts to review the current list of items that are rated zero for VAT. The panel will “consider the most effective way to mitigate the impact of the increase in the VAT rate on poor and low-income households.”

The panel is able to make proposals that “may alter the fiscal framework for the 2019/20 financial year and beyond”. The panel is also able to make suggestions about government programmes to assist poor and low-income households. “The deadline for the panel’s final report is 31 July 2018.”

According to Treasury the VAT increase is expected to raise government revenue by R22.9 billion in the 2018/19 financial year. In the 2017/18 financial year, VAT contributed about a quarter (24.7%) of the total tax revenue, while personal income tax accounted for 38%, corporate income tax 17.3%, fuel levies 5.6% and customs and excise duties 7.6%, with the category “other” making up the balance.

Treasury said the main reason for the VAT increase “was the large size of the revenue gap and the fact that a VAT hike was the tax that would be least harmful to economic growth”. It said government still faces a revenue gap of R48.2 billion in the current year.

The memorandum was accepted by SAPS Captain Rachel Chippendale, who assured the workers that she would “get it to the right people”.

Malverne de Bruyn, COSATU’s provincial secretary, said the union is giving government 14 days to respond. “If government does not respond we will be back and take to the street with more numbers,” said De Bruyn.