Workers barred from picketing at Dis-Chem 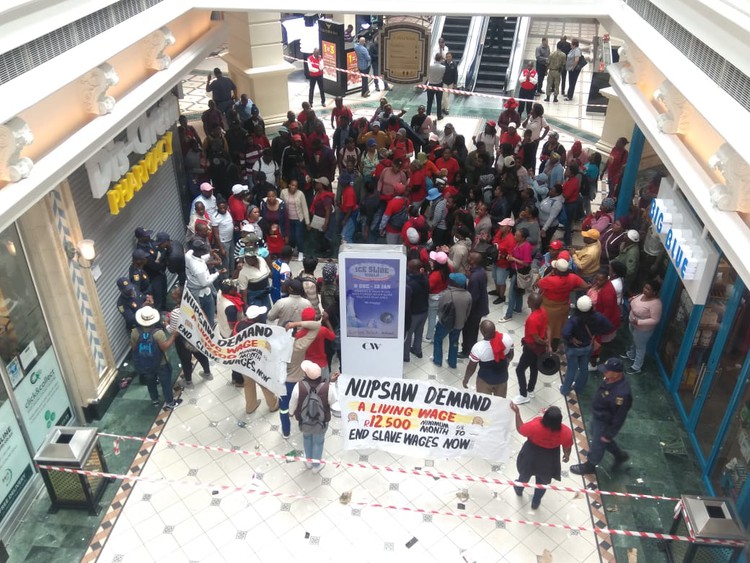 Four men were arrested when 200 workers demonstrated on Wednesday in front of the Dis-Chem store in Canal Walk, Cape Town. Workers are demanding better wages and working conditions and the recognition of their union.

The workers are represented by the National Union of Public Service and Allied Workers (NUPSAW).

In January, workers protested at Dis-Chem warehouse in Midrand, Johannesburg. They were demanding that management recognise the union and pay bonuses to union members, which they said had been withheld by the company.

Western Cape manager of NUPSAW Omar Parker told GroundUp that police had a scuffle with demonstrators who insisted on protesting in front of the shop.

“Employees have been without salary since 16 November and have lost hope. We have asked our members to remain calm, but they are desperate. We are appealing to the employer to normalise the situation. Workers who are currently on duty are being given incentives and [are] mocking the ones on strike. The employer is dividing the workers,” he said.

Western Cape organiser for the union, Vuyani Shwane, told GroundUp the workers are demanding that Dis-Chem recognise NUPSAW, but the company says the union does not meet the 30% threshold.

He said the workers are demanding: a minimum wage of R12,500 across the board; an increase of 12.5% for those above R12,500; a guaranteed annual bonus that is equal to the basic salary.

“The members would like the policy that says if you are on a final written warning you are not entitled to annual bonus to be reviewed,” said Shwane.

In a press statement NUPSAW said, “On 30 November the parties met again at the CCMA (Commission for Conciliation, Mediation and Arbitration) to try to find an amicable solution to the strike. The meeting lasted from 9am to 9pm but talks collapsed when the employer refused point-blank to bargain or to carry out a verification process to confirm NUPSAW’s membership within the firm.”

“Dis-Chem has only loaded 2,000 of the union’s 4,000 members on to their payroll records. Their refusal to even verify NUPSAW’s membership confirms that they are not negotiating in good faith,” said the statement.

Captain FC Van Wyk of the Western Cape police said that four males (aged 31, 34, 36 and 41) were arrested at a shopping mall in Milnerton area at 2pm on Wednesday, “and will be charged for contravening the regulation of a court interdict, public violence, malicious damage to property and assault”.

In a press statement Dis-Chem said it had made “history” in the Labour Court by getting strikers barred from picketing. “In an historic first, the Labour Court has ruled that the National Union of Public Service and Allied Workers (NUPSAW) is barred from picketing and protest action until 27 February 2019, while upholding the union’s right to strike,” the statement said.

“Dis-Chem was successful in proving that due to ongoing violence, the breach of picketing rules and the previous interim court order issued on 16 November 2018, the right of NUPSAW and its members to picket countrywide should be suspended with immediate effect.”

“We respect our employees’ right to strike. However, the ongoing violence and intimidation used by NUPSAW and its members to pursue their demands against Dis-Chem left us no choice but to seek relief from the Labour Court,” said Dis-Chem spokesperson Caryn Barker.

“NUPSAW had recently invited the support of certain federation unions, as well as the Economic Freedom Fighters (EFF). The Labour Court ruled earlier this year that political parties have no role to play in labour relations. As such, Dis-Chem’s initial court order of 16 November 2018, which included relief against the EFF, continues to apply,” Dis-Chem said in the statement.

“NUPSAW attempted to attach other conditions to the process [of recognising the union], including bargaining rights, to which they are not entitled due to their lack of representation. To say Dis-Chem is refusing to verify NUPSAW’s membership is misrepresenting the facts,” said Barker.

It said NUPSAW’s representation at Dis-Chem is less than 13%.