Woodstock residents shocked by prospect of life in Wolwerivier 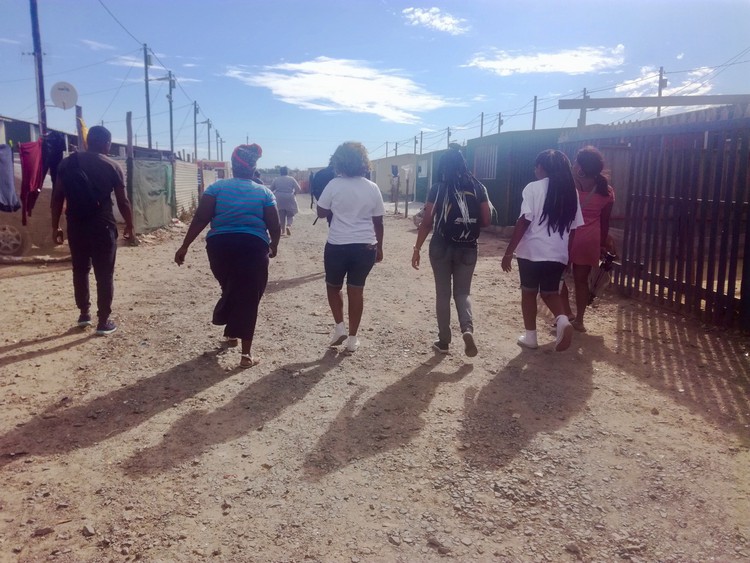 “There’s no church, no school, no clinic, no police station, no shopping mall or a community hall … We had to fight to get the street lights put up last year,” said Wolwerivier resident Nowongile Swebe, a community leader.

Swebe was speaking to a group of people who are facing eviction from an apartment block in Albert Road, Woodstock, and others who have already been evicted from elsewhere in the suburb. They all face relocation to Wolwerivier. The Woodstock residents, supported by housing activist organisation Ndifuna Ukwazi, were visiting Wolwerivier last week to see first-hand what life would be like in the settlement.

Swebe previously lived in the Skandaalkamp informal settlement a few kilometres away. She was among the first 280 families to be moved into Wolwerivier, the City of Cape Town’s temporary relocation area (TRA), in July 2015.

The Woodstock group are currently in court to oppose the City’s offer to relocate them either here or to Blikkiesdorp in Delft. The City, in a report to the Magistrates’ court, said Wolwerivier was the only emergency housing it had to offer the residents. The matter is expected to continue in court on Tuesday.

Swebe took the group on a brief tour of her one-roomed unit which she shares with ten relatives. “The City made many promises but didn’t do anything. The ambulance takes a long time to get here. The mobile clinic that comes once a month is only for children. If you don’t have money for a taxi or ask a neighbour with a car to take you to the doctor, then you’ll just have to die here,” she said.

Swebe said the community relied heavily on the assistance offered by Nikki Pretorius, the owner of the only crèche in the TRA.

Another Wolwerivier resident, Sindy Blaai, warned that the community was likely to reject “more outsiders” being relocated to Wolwerivier because of the already overcrowded conditions.

Blaai and several other households relocated to Wolwerivier from Blikkiesdorp in September 2015. This came after racial tensions erupted in the predominantly coloured TRA, forcing out Xhosa residents. Their relocation to Wolwerivier was met with violent protests as well. Central to the dissatisfaction of many former Skandaalkamp families has been the issue of overcrowding.

Since then, the community’s relationship with the City has been tense. “There was a conflict when the City brought us here, all because they didn’t communicate with the leadership in the community. We struggled here for a long time. They [the residents] told us they didn’t want us in Wolwerivier. If there was a job in the area, the people wouldn’t allow us to benefit. We had to sort it out on our own,” Blaai told the Woodstock group.

“There are no empty houses in Wolwerivier. There are people still waiting for units. So if they are going to bring people from outside and put up more structures, there will be more conflict,” she said.

One of the Woodstock occupants, Desiree Ling, said, “I feel for those who already live here. I wonder if one of them [City councillors] would come and live here. It’s very sad. Children have nowhere to play; there’s nothing for them to do here. How will we get to work?”

Delia Fielies, also from Woodstock, said, “The City should be shamed for wanting to put us in the middle of nowhere. There’s no recreational facilities for children here. There is no privacy in these homes. I only have boys living with me. Does this mean I must now wash myself in front of my grandsons? I refuse to come and live here. I would have to sell most of the furniture I worked so hard for because my things would never fit [in].”

Nkosikhona Swaartbooi of Ndifuna Ukwazi said, “There is the potential that there might be new residents moving in yet again. This is what the City is pushing and we want the court to know about these dynamics. The issue of overcrowding in Wolwerivier has not been resolved.”

Suzette Little, the Mayco Member for Area North responded to questions about Wolwerivier

GroundUp: Is it true that the City did not inform the leadership structures in Wolwerivier before relocating the group from Blikkiesdorp in 2015. This subsequently resulted in violence protests at the time?

Little: The City is on the record as having emphasised that the relocation was of an emergency nature, i.e. there were lives at stake. Time was of the essence and the then leadership was not consulted beforehand. It must be noted that Wolwerivier also serves as an emergency relocation area and there cannot be gatekeepers deciding who receives help or not. We understand the complexity of the situation. The City will always engage with residents and leadership structures where it is possible.

GroundUp: Did the City make any attempts to help broker a relationship between the two groups? If so, when?

Little: Yes, at the time the then leadership met with the Blikkiesdorp group and they resolved their differences.

GroundUp: Many of the Wolwerivier residents claim that the City has not fixed leaking roofs or created drains for the area. Is this true?

Little: Wolwerivier is an Incremental Development Area with underground services and there is no need to create drains. Although it is unlikely that the roofs will leak due to the construction methods used, all complaints may be discussed with City field officers who are available on site regularly.

GroundUp: The residents also claim that the City never kept its promise to give adult family members or tenants their own units, particularly those moved from Skandaalkamp. Was this promise made? And if so, what were the challenges for not being able to keep it?

Little: In an effort to prevent over-crowding, larger families were given two units.

GroundUp: Should more evictees be relocated to Wolwerivier, how many more units can be built in the current demarcated area? Or will the area be expanded?

Little: Another approximately 20 to 30 units could be built if required but this would be pending decisions and further discussions and is subject to due process. The City has development rights to build a maximum of 500 units.

Correction: We mistakenly attributed the answers to Councillor Xanthea Limberg in an earlier version fo the article.