Woodstock residents protest on symbolic bridge against their evictions

Case to be heard on Thursday 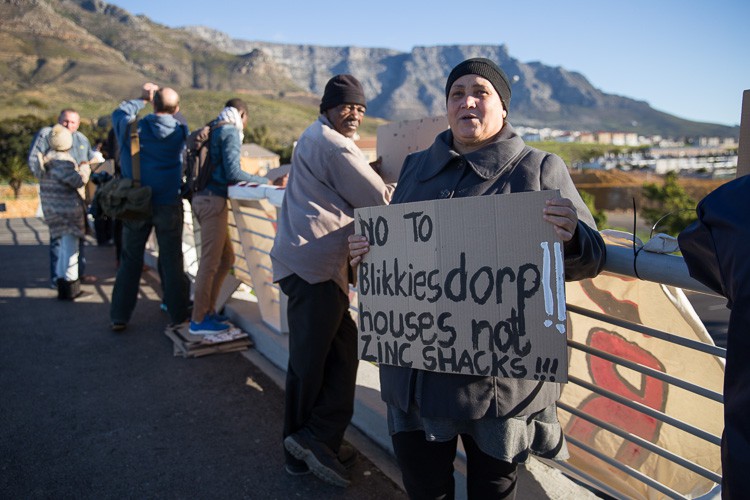 Desire Faghmeeda Ling and other residents of Woodstock protested against their evictions on Tuesday. Photo: Ashraf Hendricks

Over a dozen Woodstock residents and their supporters held up posters and banners on Father Basil van Rensburg Bridge during peak hour traffic on Tuesday afternoon. The posters said “no to Blikkiesdorp” and “Woodstock is my home”. Cars and taxis in bumper-to-bumper traffic leaving the CBD on Nelson Mandela Boulevard today hooted in support of the group who were protesting against recent evictions in the Woodstock area.

About 15 families were served with eviction notices in March and April to vacate their homes by the end of May for not paying rent. Residents, in turn, accuse the landlord, known only as Mr Patel, of neglecting to maintain the property. They say they stopped paying rent after their water was cut off nearly a year ago by the municipality due to non-payment by the landlord. They are opposing their eviction at the Cape Town Magistrates’ Court this week.

A few roads away in Bromwell Street, a group of residents are also facing eviction to make way for a development by the Woodstock Hub. The City of Cape Town has argued that the residents can be temporarily accommodated in Wolwerivier, a remote low-cost housing development 25km north of the CBD. But Ndifuna Ukwazi Law Centre, representing the residents, argues that the City has a constitutional obligation to provide the residents with emergency accommodation as close as possible to their homes and that the conditions in Wolwerivier would “further entrench their vulnerability”.

Zelda Johnson, 54, has been living as a backyarder in Woodstock for several years. She fears being evicted soon as rental costs in the area continue to rise. “I’m a community worker and don’t make money to pay rent somewhere else. The City [of Cape Town] promised us low cost housing a few years ago. We are still waiting,” she said.

Desire Faghmeeda Ling, who faces eviction from her Albert Road home, said they chose to protest on Father Basil van Rensberg Bridge because of its geographical location and cultural significance. “We use this bridge to go to family, work and schools. It’s encouraging that people are responding to us [by hooting],” she said. Van Rensburg, after whom the bridge is named, was a Catholic priest who opposed the apartheid government’s removal of people from District Six in the 1970s.

Ling said families were scared that they would be forced to moved to Wolwerivier or Blikkiesdorp where “the living conditions are inhumane”.

The Albert Road residents are due to defend their eviction in court on Thursday.