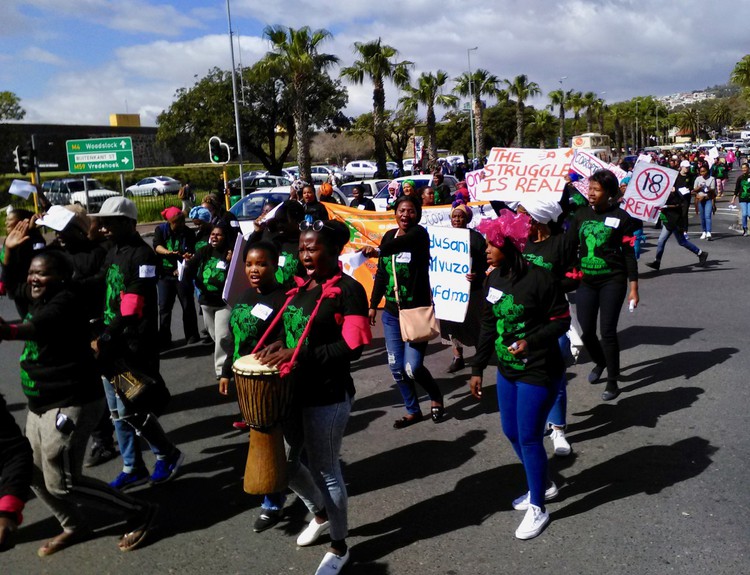 More than 200 women farm workers marched from Keizergracht Street in Cape Town to the provincial legislature and then to the Department of Labour. Photo: Laura Bratton

On the last day of women’s month, more than 200 women farm workers marched from Keizergracht Street in Cape Town to the provincial legislature and then to the Department of Labour. They wore black shirts that read: “Stop labour rights violations!”. They carried posters with “Demand Better Labour Conditions” and “We Demand Toilets in the Vineyards”. They danced and sang: “We are ready to take our rights” and “We want a living wage”.

The protest was organised by the Women on Farms Project (WFP), a non-governmental organisation that promotes the rights of women who work in commercial agriculture in the Western and Northern Cape.

The march followed a presentation by the group earlier that morning at Community House in Salt River, where Colette Solomon, director of WFP, presented recent research on violations of labour law on commercial farms.

The study used information from 343 questionnaires completed by women farm workers. It found that 75% of seasonal workers in the sample were not paid the minimum wage. Farm workers also reported health and sanitation concerns. 72% of women seasonal workers indicated there was a lack of toilet facilities where they worked, and that they were forced to use “a bush or a secluded spot”.

The study concluded that “farmers are systematically violating laws that were introduced to protect and advance the rights of farm workers”.

Women participating in the protest work on commercial farms in Western Cape towns, including Ceres, De Doorns, Stellenbosch, Rawsonville, Paarl, Klapmuts, Robertson, and Wolseley. Two trade unions, Commercial, Stevedoring, Agricultural and Allied Workers Union (Csaawu) and Agricultural Workers’ Empowerment Trade Union Council (Awetuc), participated in the presentation at Community House and the march through Cape Town. Awetuc is an umbrella organisation of local agricultural trade unions not associated with Csaawu. Guest speakers from both organisations spoke outside of the provincial legislature and the Department of Labour during the march.

In a memorandum, women farm workers called on the Western Cape Department of Agriculture to guarantee that farmers comply with labour laws and support the development of a system that recognises and punishes farmers who violate them.

They also want the department to reform the farm inspection process, respond to rights violations reported by workers faster, and prosecute farmers who violate labour laws.

The memorandum asked the Western Cape Department of Agriculture and the Department of Labour to “establish quarterly multi-stakeholder Labour Forums… to develop strategies to advance the position of farm workers, especially women.”

Nomtnandazo Mangcotywa, 25, said, “I came to march to fight for the rights of farm women.” She works on a farm in Western Cape and said she is paid below the minimum wage of R778.

Bettie Fortuin, 56, is a retired farm worker who dedicates her time to promoting the rights of women farm workers. Fortuin complains that farmers do not accept notes from free clinics excusing farm workers from work when they are sick.

Patricia Zuma, a transgender farmworker, said she faces threats of physical assault because of her gender identity. Zuma says that her employer does nothing to protect her.

The WFP says it has protested and delivered memorandums to the Western Cape Department of Agriculture and the Department of Labour whenever labour rights concerns have arisen since its founding in 1996. But little has been done by the government beyond superficial assurances.

The Department of Labour responded to the protesters, stating: “We are listening, and we will respond …Thank you for your unity, and thank you for standing up for your rights.”

Solomon believes that real change will only be achieved with what she calls “radical agrarian transformation”. There needs to be a “structural systemic overhaul… land distribution and pay wage and economic development that challenges the status quo.”